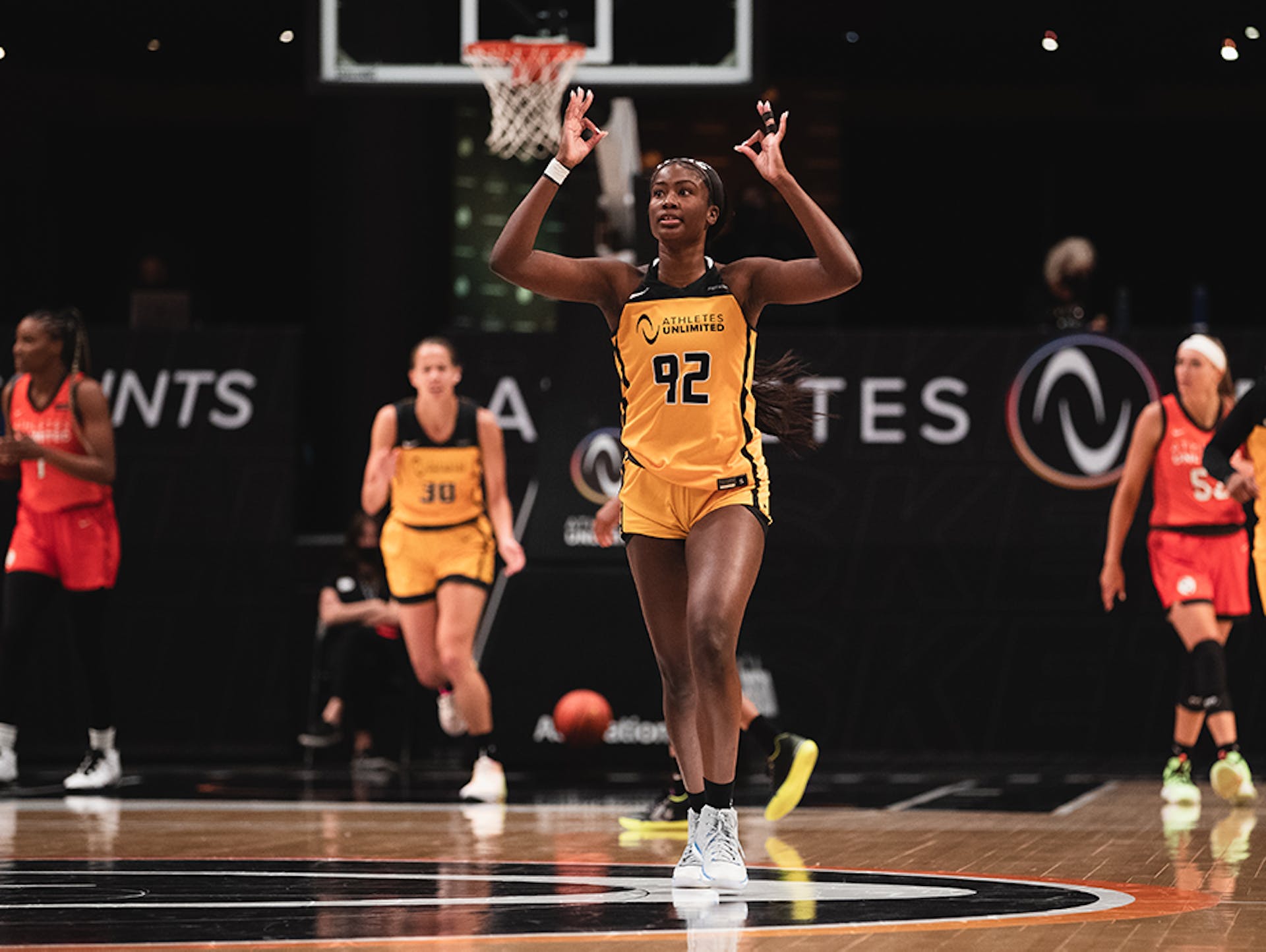 This week she had her own team and continued her torrid scoring streak.

Hawkins had 32 points and a season-high 14 rebounds to lead Team Hawkins to a 104-90 win over Team Brown on Saturday night at Athletes Unlimited Arena at Sport Center of Las Vegas.

Hawkins scored 30 or more points for the third time this season while registering her fifth double-double of the campaign.

It was an impressive display by a team that was blown out by Team Harrison on Wednesday and needed a come-from-behind push to defeat Team Cloud on Friday.

“The first game left a bad taste in our mouth, second game we came a lot more hungrier, and this game we just built off our momentum,” Hawkins said. “I remember telling the team after the game tonight, this is what I drafted y’all for. It felt good winning tonight.”

Jessica Kuster, making her second start of the season, scored a season-high 16 points and grabbed six rebounds for Team Hawkins while playing in front of her family for the first time as a professional.

“It’s awesome,” Kuster said. “It was really one of the biggest things I was looking forward to coming into this league. I know my family’s excited, they got all the signs and stuff, so I’m really happy to have them here.

“We had a very young team this week, and a lot of it was just our focus,” McGee-Stafford said. “We were up very early in most of our games, and it’s just focus, and that’s something that’s gonna come with time.”

Though Team Brown held the lead for much of the first half, the game was nip and tuck with Team Hawkins keeping things close throughout. Team Brown raced out to a 20-13 lead with Lavender heating up early and went into the second quarter leading 26-19. Team Brown hit 11 of 19 (57.9%) from the floor in the first, including 9 of 16 (56.2%) from inside the arc.

Team Hawkins made its push early in the second with a 17-7 run, giving it a brief 36-33 lead thanks to the hot hand of Harris, who scored nine of the 17 points. Team Brown with a 6-0 run of its own, before Walker tied it at 39 with a 3-pointer. Lavender scored Team Brown’s last eight points, while Hawkins scored six of her team’s final eight points, and the teams went into intermission tied at 47-all. Team Brown shot by 52.6% in the first half, while Team Hawkins shot 17 of 37 (45.9%).

Team Brown would race out to a pair of six-point leads over the first half of the third quarter, but Team Hawkins responded with a 20-10 run, sparked by 11 points from Hawkins. Team Hawkins had its best shooting quarter to that point with 64.7% (11 of 17) of its shots falling, including 4 of 6 (66.7%) from 3-point range. Team Brown also shot well, despite falling behind by four, hitting 11 of 16 (68.8%) from the floor.

KEY MOMENT: Team Hawkins overcame a 63-57 deficit in the third quarter by going on an 18-5 run to take a 75-68 lead it did not relinquish. The team led by as many as 16 points in the fourth quarter to secure the victory.

NOTES: Hawkins was named MVP 1 for 90 points and finished the week with 702 points. Walker earned 60 points for MVP 2 and 592 total. Earning 30 points was Kuster, who finished the night with 416 points.

Despite losing the first quarter to Team Brown (+50), Team Hawkins swept the remaining win points in the game, earning each player 250 points.

Heading into Week 4, four returning players will be in the captain’s seats. Captaining the gold squad once again will be Tianna Hawkins, who has 4,298 points on the season. Harrison, who sits 447 points behind Hawkins with 3,761 points, will captain the Orange team. Natasha Cloud will remain captain of the blue with 3,390 points. Lexie Brown, who sits in the fourth spot, will be unavailable for Saturday’s games during Week 4 making her ineligible to be captain. Instead, No. 5 Odyssey Sims will captain the purple team. Sims has accumulated 2,950 points.

Team Hawkins marked the seventh time a team has reached the century mark in 18 games this season. … Team Hawkins out-rebounded Team Brown, 35-29, and held a 21-8 edge in second-chance points … However, Team Brown owned a 44-24 advantage in points in the paint. … Team Hawkins set an Athletes Unlimited Basketball season-high by making 23 free throws, including a 17-for-17 effort in the second half. … Team Hawkins matched a league season-high by knocking down 13 3-pointers in its Week Three finale. … After scoring just nine points in her last two games, Harris registered her sixth double-digit scoring effort.