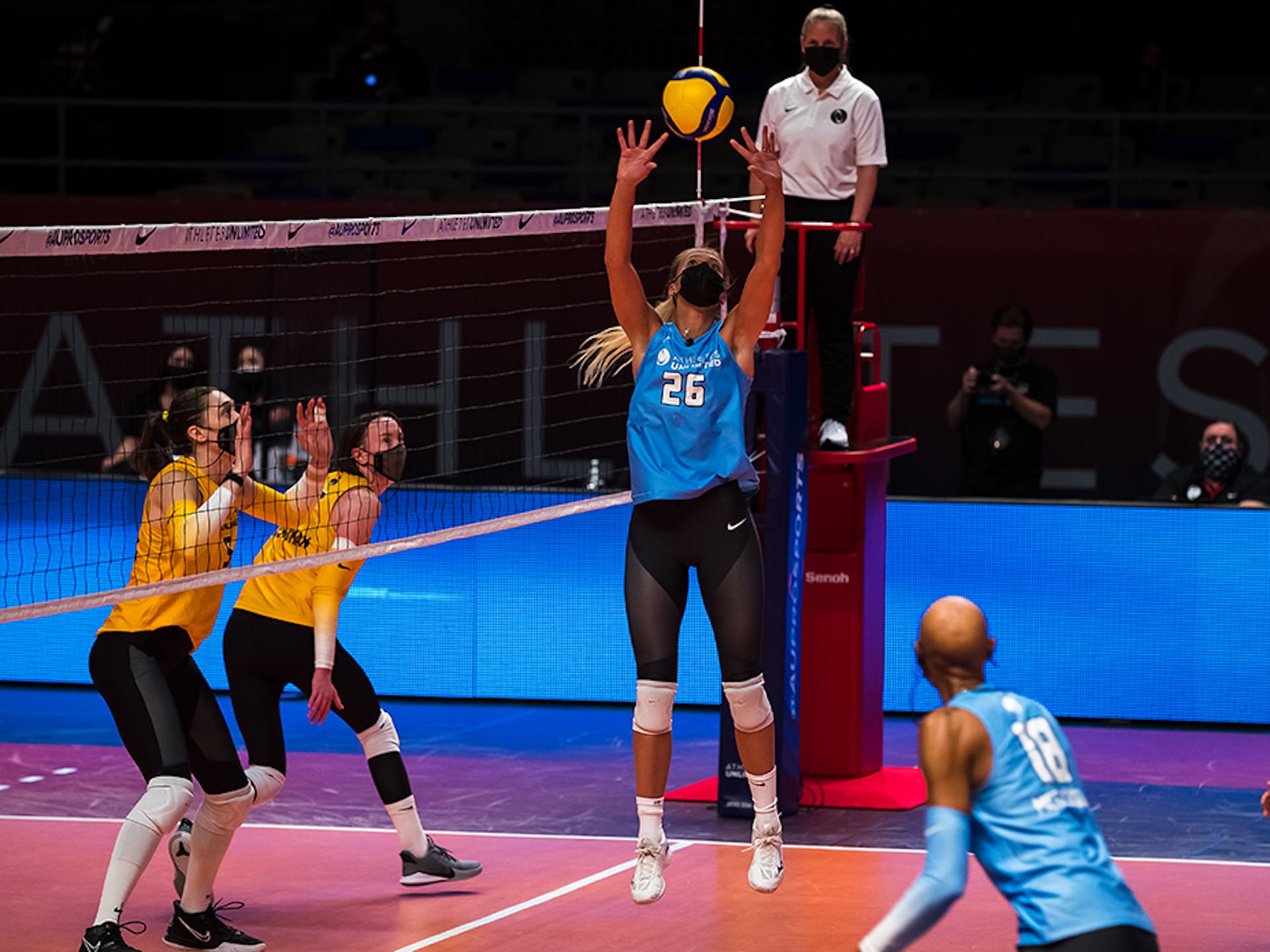 Despite dropping the first set 25-20, Team Lowe (Blue) found their footing in the second set and rallied for a comeback two-set and overall 70-67 victory over Team De la Cruz (Gold).

Although outside hitter Bethania de la Cruz and opposite Karsta Lowe had been teammates in Week 3, this week they were on opposite sides of the court.

As the second set began, Team Lowe emerged from their team huddle with a more relaxed and confident court presence.

“Our mentality this whole week was an underdog mentality. You know Betty [De la Cruz] and Jordan [Larson] always have really strong teams, so I knew playing them was going to be a challenge,” Lowe said. “Our mentality was to maintain our energy, our fire, and we don’t have to do a lot; we all just have to do our part, and hopefully it’ll come together, which it did so that’s great.”

Throughout the second set, Team Lowe minimized their errors and rallied more consistently than they had against Team De la Cruz in the first set. A key rally happened for Team Lowe at 9-6 as Brie King was serving. King’s serve caused Team De la Cruz to be out of system and outside hitter Cassidy Lichtman rolled the ball back over the net. Lowe attacked from the right side but was blocked. A quick touch from King kept the ball alive, but sent it towards the back of the court. Outside hitter Symone Abbott recovered it as she dove and made an incredible touch with one hand. The save allowed her team to reset for Taylor Morgan to end the point with a stuff block against middle blocker Molly McCage, and Team Lowe erupted into celebration.

The play showcased the energy and fire that Team Lowe had struggled to show in the first set.

Yet, Team Lowe responded to the challenge to overcome the point differential in the final set.

In the final game, the two teams were neck and neck until the midway point when King went on a 7-point serving run. Team De la Cruz could never stop Team Lowe’s momentum and string together their own serving run. They ultimately lost the set 18-25, and lost the overall match by three points, at 67-70. Team Lowe earned 140 points for their wins while Team De la Cruz earned 40 points for their one set win.

Lowe was voted MVP 1 for her outstanding performance during the match, helped by her excellent connection with King, who was her first selection of the Week 4 Draft. She finished the match with a .450 attack percentage from 25 kills on 49 attempts and had two blocks. She earned 60 points for the MVP vote, for 410 overall points.

Outside hitter Deja McClendon also had a standout performance with seven kills on 22 attempts for a .270 attack percentage, 14 digs, and one block. She was named MVP 3 for an additional 20 points for 287 in total.