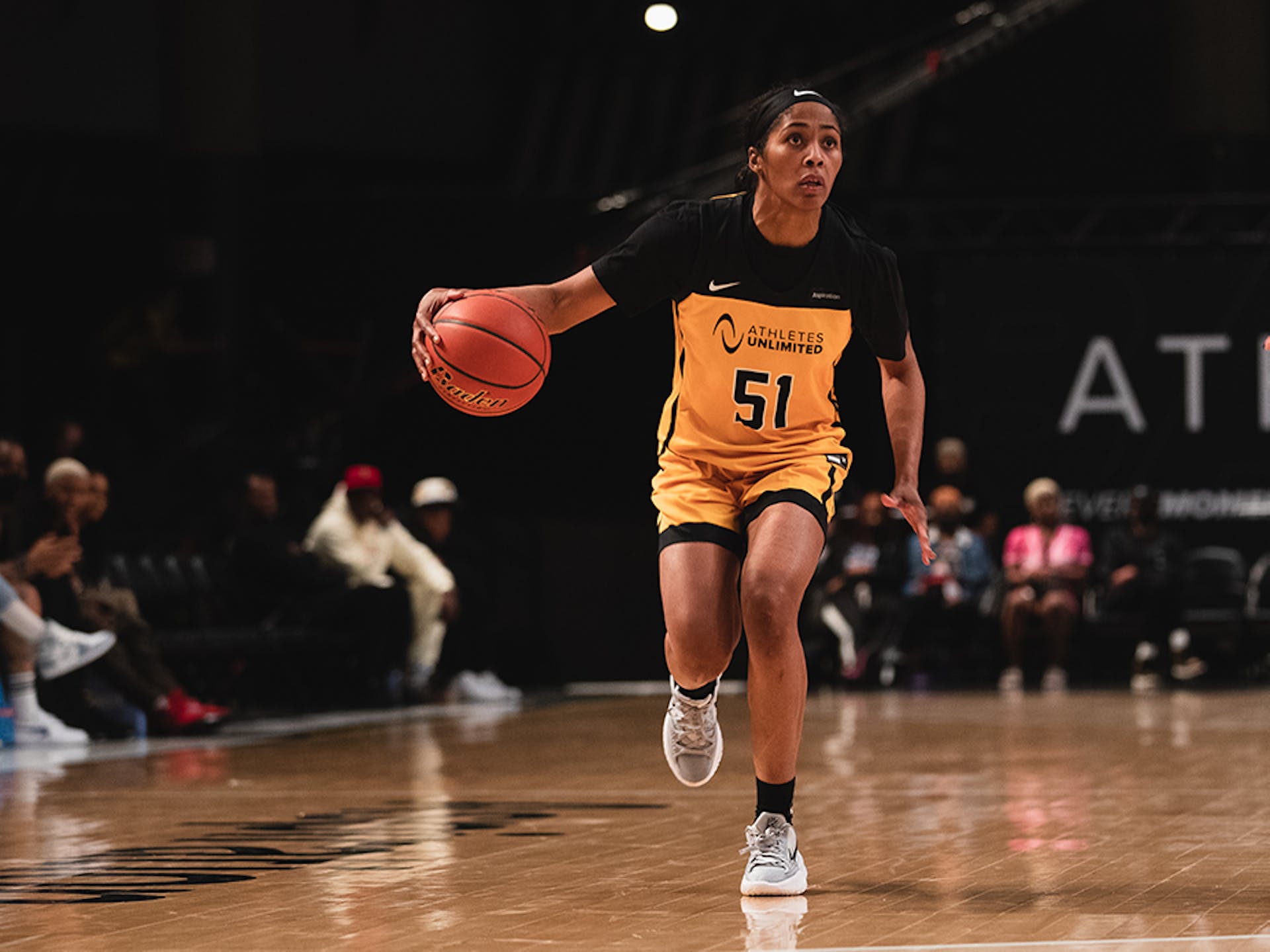 LAS VEGAS — Losing by 25 points can leave a bad taste in your mouth.

Still seething from a dismal performance to start Week 3, in a 79-54 loss to Team Harrison, there was no way captain Tianna Hawkins was going to allow her team to play in the same manner.

Thus, Hawkins scored 28 points and grabbed 13 rebounds and her squad turned the tables in a resounding 90-70 victory over Team Cloud at Athletes Unlimited Arena at Sport Center of Las Vegas.

“I told myself I wasn’t gonna lose no sleep over (Wednesday’s loss),” said Hawkins, who posted her league-leading eighth double-digit scoring effort and fourth double-double of the season. “I know when I came back this morning I told them that can’t happen again. We talked about a lot and we did a lot better today.”

Sydney Colson had a season-high 20 points and nine assists, Air Hearn registered season-bests of 14 points and four 3-pointers off the bench, and Destinee Walker contributed with 11 points.

“We talked about a lot of things that took place in that game being on us,” Colson said. “It was about pride, being on defense, effort, we didn’t have energy. It was embarrassing as a professional athlete. It was trash the way we played.

“We knew we needed to correct what we could correct and we tried to do that tonight.”

Team Cloud was led by DiJonai Carrington, who had 24 points, seven rebounds and six assists. Drew Edelman had season-highs of 15 points and 14 rebounds, and Essence Carson chipped in with 13.

“You can’t win a game with 20 turnovers, it’s simple as that,” Carson said. “We turned the ball over which isn’t like us. We have a lot of savvy guards that can take care of the ball and tonight we just allowed the ball to get away from us.”

Team Cloud pushed its lead to 10 by taking a 52-42 edge, but Team Hawkins showed its resiliency and came alive to close the third quarter on an 18-6 run sparked by Colson’s offense and Hawkins’ defensive presence. Colson started the run by converting a 3-point play, Hearn hit a couple of 3-pointers, Walker added a trey of her own, and Colson finished the period with slashes to the bucket. Team Hawkins shot 52.6% (10 of 19) in the third, while Team Cloud hit just 7 of 17 (41.2%).

“It was mainly a confidence thing, and my teammates believing in me,” said Hearn, who also grabbed a season-high five rebounds. “My teammates were kind of on me this game, telling me they knew I had another level.”

NOTES: Colson, who was everywhere on the court for Team Hawkins, was named MVP 1 for 90 points. She finished the night with 481 points overall. Earning MVP 2 honors (+60) was teammate and captain, Hawkins, who accumulated 533 points. Hearn added 30 points for being named MVP 3 and tallied 384 points.

Team Cloud picked up 100 points for its first and second quarter wins, while Team Hawkins added 200 win points from its quarter and game win.

Team Hawkins converted all 10 of its free throws, marking the second time this season a team has been perfect at the charity stripe after Team Harrison was 14-of-14 against Team Russell last Saturday. … Team Hawkins outscored Team Cloud, 30-12, in the fourth quarter – the largest margin in a quarter this season. … Team Hawkins held a commanding 23-2 edge in bench points over Team Cloud. … Hawkins set a league season-high with 13 defensive rebounds. … Edelman’s 14 rebounds are the most by an Athletes Unlimited Basketball player this season. … Forward Jessica Kuster made her first start of the season in the win over Team Cloud and scored eight points while contributing a season-high seven rebounds.