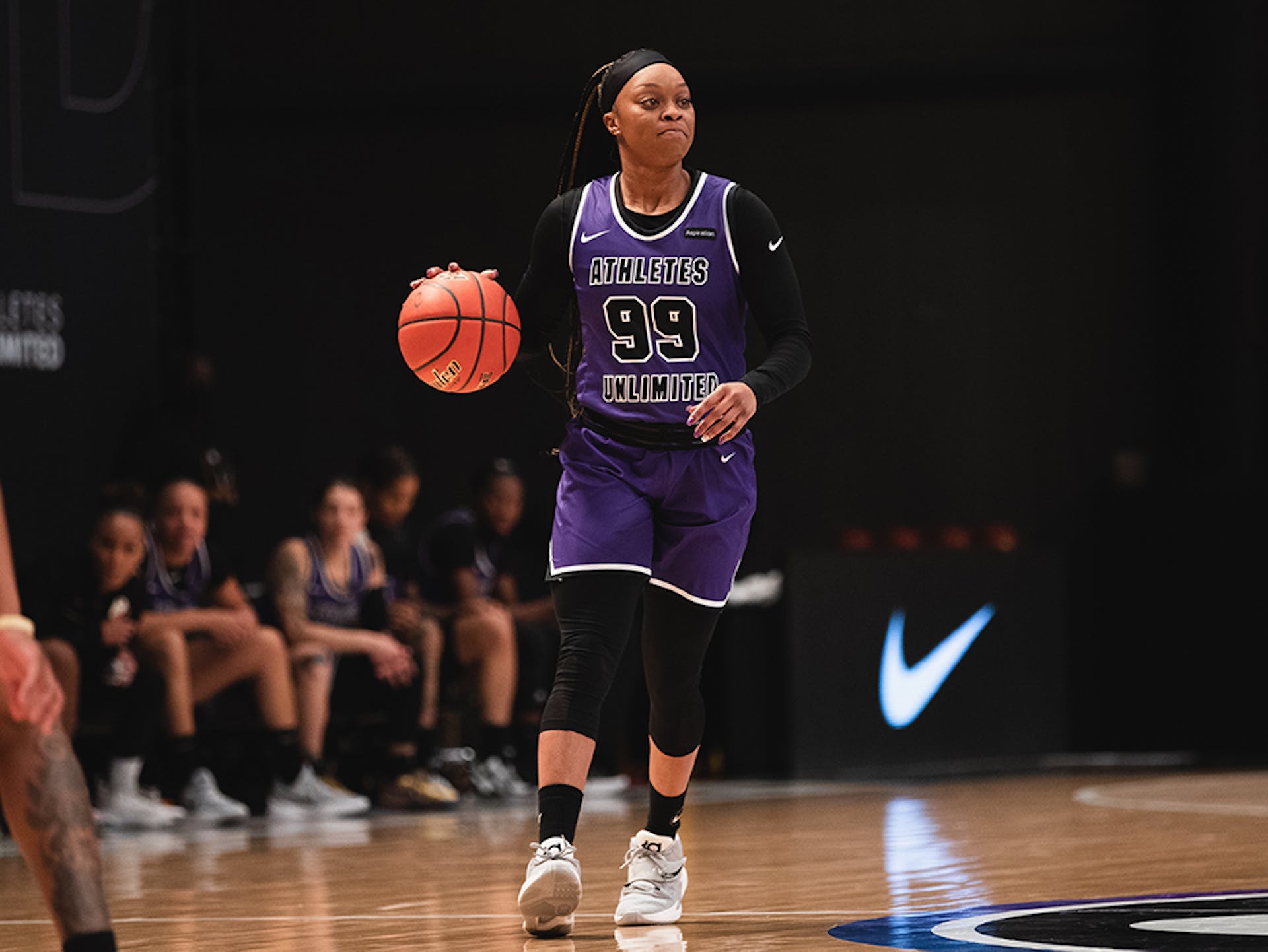 It was something Courtney Williams discussed Wednesday night in a “Chair Chat” during Team Harrison’s win over Team Hawkins. Williams wanted everyone to know there is another dynamic duo in the league – not just Natasha Cloud and DiJonai Carrington, and Lexie Brown and Taj Cole – that being her and captain Isabelle Harrison.

Friday night the sauce was overflowing inside Athletes Unlimited Arena at Sport Center of Las Vegas.

“I said Izzy (about the duo) – but it’s everybody,” said Williams, who secured her second double-double in the last three games. “It started with (Odyssey Sims). O bring that defensive intensity, she telling us, ‘get down, play D.’ I learned from O baby. Once we got down, we got those stops, man we strung together stops and it made our offense easy. When you get those stops, it’s like put your foot on the gas.”

Said Harrison, who posted her second game with 25 or more points, and shined in the second half by scoring 19 points on 7-of-9 shooting from the field: “I’ve been playing with Courtney for years, and I know what she can bring to the team – she can literally will her team to win. That’s how I go into every Sunday thinking about who I want to play with. Again, we’ve been playing (together) for years. She brings that energy I need. As a coach I can’t see everything, I can’t always bring that energy, but she supports me, she’s my co-captain and I love playing with Court.”

Sims, a Week 1 captain, registered her second double-double of the season with 16 points and 13 rebounds. Nikki Greene and Ty Young each chipped in with 11.

Sims said Team Brown spent the first half of the game out-hustling Team Harrison, grabbing loose balls, defending, getting easy shots up and running the game at their tempo to build their double-digit lead.

Thanks to a stingy and smothering defense, Team Harrison held Team Brown to just 10 points over the final half of the fourth quarter, while using a 17-10 run to close things out. The 21-point deficit marked the largest comeback by a team in Athletes Unlimited Basketball this season. Team Harrison outscored Team Brown by 20 points (56-36) in the second half and shot 70.0 percent from the field (21-for-35) after the intermission.

“It was easy for them in the first half and I think we came out with a little more intensity, little more energy,” said Sims, who registered her second double-double of the season. “It started with defense. Turn the page, denying, not letting easy catches for the guards and it turned around and we were able to chip away and take it possession by possession.”

Team Brown was led by Jantel Lavender, who poured in 22 points. Brown and Cole each had 14, while Dominique Wilson added 12.

After falling behind by 21 in the first quarter, and 20 in the second quarter, Team Harrison woke up out of intermission.

Team Harrison came out of the half sparked by an offensive surge from Kirby Burkholder and Harrison, as both accounted for all the team’s points during a 12-7 run to start the period. Trailing by 10 at that point, Brown stopped the bleeding with a nasty 3-pointer off a crossover move on Burkholder. But Team Harrison went right back to work, closing the quarter on a 13-5 run that included a pair of treys and a 3-point play by Sims. Team Harrison shot 58.8% (10 of 17) in the third, including 3 of 5 (60%) from 3-point range. Team Brown committed six turnovers in the quarter, while Team Harrison capitalized and scored six points off those miscues.

“This is the second game that we did this,” said Wilson, who has scored in double figures in four consecutive games. “We came out hot the first half, in the second half honestly we just got too comfortable. Every time you get comfortable a team is gonna smack you in the mouth. I thought we learned better from the first game, but we did it again.

“This is a good team, so when they go on a run and they end up being up, it’s hard to come back from that.”

The teams started the game competitive, trading buckets early with Team Brown holding a 10-6 lead. Then the floodgates opened. Team Brown broke free on a 17-0 run, with contributions across the board from all five players on the floor during the spurt. It was the largest run by a team this season. Team Harrison was held scoreless for 4:40 in that stretch, going for 0 for 6 before scoring the final seven points of the quarter, as Team Brown led 27-13 after one. While Team Brown was red-hot to start the game, hitting 11 of 20 (55.0%) from the floor, including 4 of 6 (66.7%) from 3-point range, Team Harrison struggled to find its groove and shot just 25% (4 of 16) from the field in the opening quarter.

The energy carried over to the second quarter, where Team Brown quickly doubled up Team Harrison with a 38-19 lead midway through the period. Though Team Harrison made a mini-run with a couple of buckets from Harrison and two free throws by Greene, it wouldn’t get closer than 14, as Team Brown responded with four quick points before Ty Young drained a 3-pointer at the end of the quarter. Team Brown, which led 45-30 after one and won both quarters, finished the first half with a 44.7% (17 of 38) clip from the floor, including 6 of 13 (46.2%) from long range. Team Harrison, meanwhile, stayed in neutral offensively and finished the half hitting 9 of 31 (29%) from the floor and 3 for 7 (42.9%) from 3-point range.

KEY MOMENT: Trailing by a 69-66 margin, forward Isabelle Harrison converted a traditional three-point play to even the score at 69-all and ignite a 16-5 spurt that gave Team Harrison an 82-74 lead with 1:10 remaining in regulation. Harrison and Courtney Williams combined to score 12 of the 16 points during the outburst.

Team Harrison out-rebounded Team Brown by a 42-38 margin, including a 13-12 edge on the offensive end. … Team Brown knocked down 11-of-24 3-point attempts in Friday’s loss … It is the fourth time this year a team has made 11 or more 3-pointers in a game. … After shooting 44.7 percent from the field in the first half, Team Brown was limited to just 13-of-33 shooting (.394) after the intermission. … Cole also dished out a team-high eight assists, marking the fourth time this year she has tallied six or more assists in a game. … Harrison now owns five 20-point games this season, which is tied for the most in the league with guard/forward DiJonai Carrington, who played in the nightcap for Team Cloud.

Our Season 1 Volleyball Athletes and their Causes