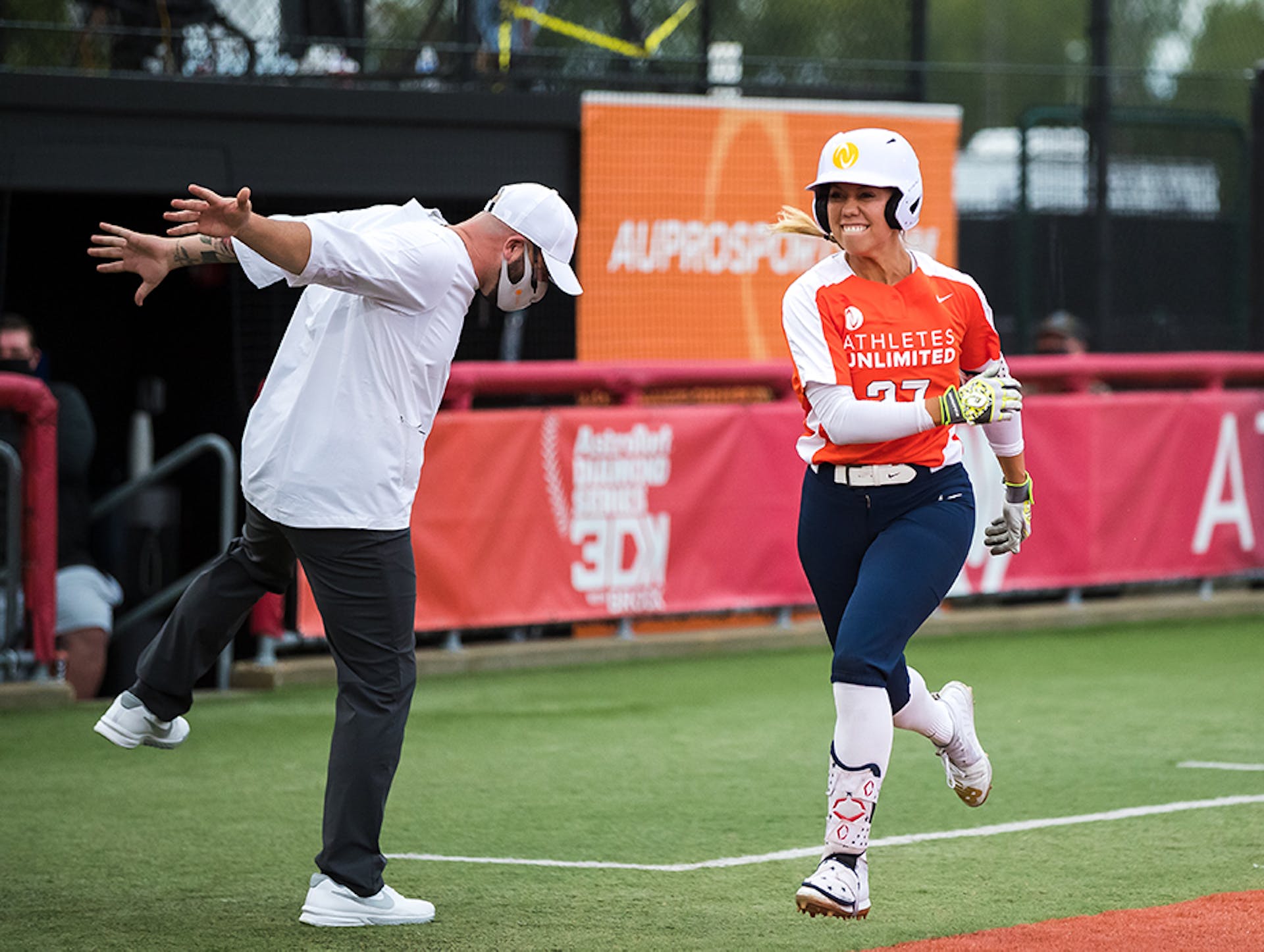 There was no shrouding this one in either mist or mystery.

The hitters on Team Piancastelli brought their power game Saturday.

Megan Wiggins and Morgan Howe each took turns hitting home runs over the scoreboard in right-center field, and Sahvanna Jaquish added the clincher with a fifth-inning grand slam to deep left-center as Piancastelli’s Team Orange slugged past Team Sanders (Purple) 7-4.

The game began with a light mist falling from the Rosemont sky, and it ended in a steadier drizzle.

There seems to be a little competition going as far as taking aim on that 36-foot-high board at the Parkway Bank Sports Complex. Howe has two that have cleared the board this season, and now Wiggins has one.

“Yeah, I totally asked her that after she hit her home run, that she was trying to hit it farther than I did,” Wiggins said of Howe. “It’s all fun. We’ve just been working hard in the cage and really trying to be the best we can be. It was really fun to see her be able to be successful off J.B. (pitcher Jessica Burroughs).”

A five-run bottom of the fifth for Team Piancastelli erased a 3-2 deficit.

Wiggins got things going in a big way in the bottom of the third as Team Piancastelli broke a scoreless tie with a two-out rally.

Kelsey Jenkins led off the inning with a single, but she was erased when Howe grounded into a 6-3 double play. Nicole Pendley kept the inning alive with a single to right field. Wiggins followed with a two-run blast that cleared the 36-foot-scoreboard in right-center. If that sounds familiar, it’s because Howe accomplished the same feat last Saturday.

Team Sanders took a 3-2 lead in the top of the fifth. Kelsey Stewart dropped a double between the infielders and outfielders in left field. She took third on Jazmyn Jackson’s groundout to the pitcher. After AJ Andrews walked, Kylan Becker bounced one to second baseman Caleigh Clifton, who elected to throw home instead of taking the easy out at first base and conceding the run. Catcher Piancastelli could not come up with the ball, and a run scored on the fielder’s choice.
Team Sanders scored twice more, on an RBI groundout by Nerissa Myers and a throwing error by third baseman Jaquish.

The five-run fifth inning happened with two outs. Howe sent one over the board with nobody on base, and later in the inning Jaquish hit her slam.

“The weather conditions, I think it was a little misty, but there was no wind,” Jaquish said. “They (relieved with Morgan) Foley and put J.B. back in. I felt like I was seeing her really well. So I kind of just trusted what I was seeing before. Also, I made a throwing error, so I was like, ‘All right, you got to do something big here for my team and step up in a big way.’ So I just swung for the fences and that’s what happened.”

Not to be overlooked was the pitching performance of Team Piancastelli’s Haylie Wagner.

Wagner tossed a complete-game five hitter, giving up four runs (two earned). She ran her record to 3-3 for the season. With the way she has carried the workload for her teams, Wagner has been an unsung hero of the competition, as she has operated in the long shadow cast by Cat Osterman, who has dominated hitters in the early going.

For Saturday’s efforts, Wagner earned MVP 1 honors for 60 additional points to the 100 win points and 64 stat points. Wiggins was MVP 2 for 40 additional points, and Jaquish picked up 20 extra points for being MVP 3.

“Every day is a chance to get better,” Wagner said. “I think as I keep going I just want to continue to do that and do my part for the team. As a pitcher, all I want to do is get my team back in the dugout so the offense can produce.”

The conditions definitely presented a challenge.

“Mist is definitely the worst for a pitcher as I personally think,” she said. “But being able to play college in the Midwest (at Michigan), I’ve learned how to have a different windup and keeping the ball dry, (using) rosin and having a towel to keep you hand dry is key. You just have to adjust to it.”

Burroughs, who was inactive last weekend, pitched 5.1 innings in her return to action. She gave up eight hits and six earned runs. Kelsey Stewart had a double and a walk for 30 stat points for Team Sanders to go with the 20 innings points her team won.

As far as the “longest-drive” competition between Wiggins and Howe, Wiggins put it in perspective.

“I’d rather have the most home runs rather than the furthest home runs,” Wiggins said with a smile.