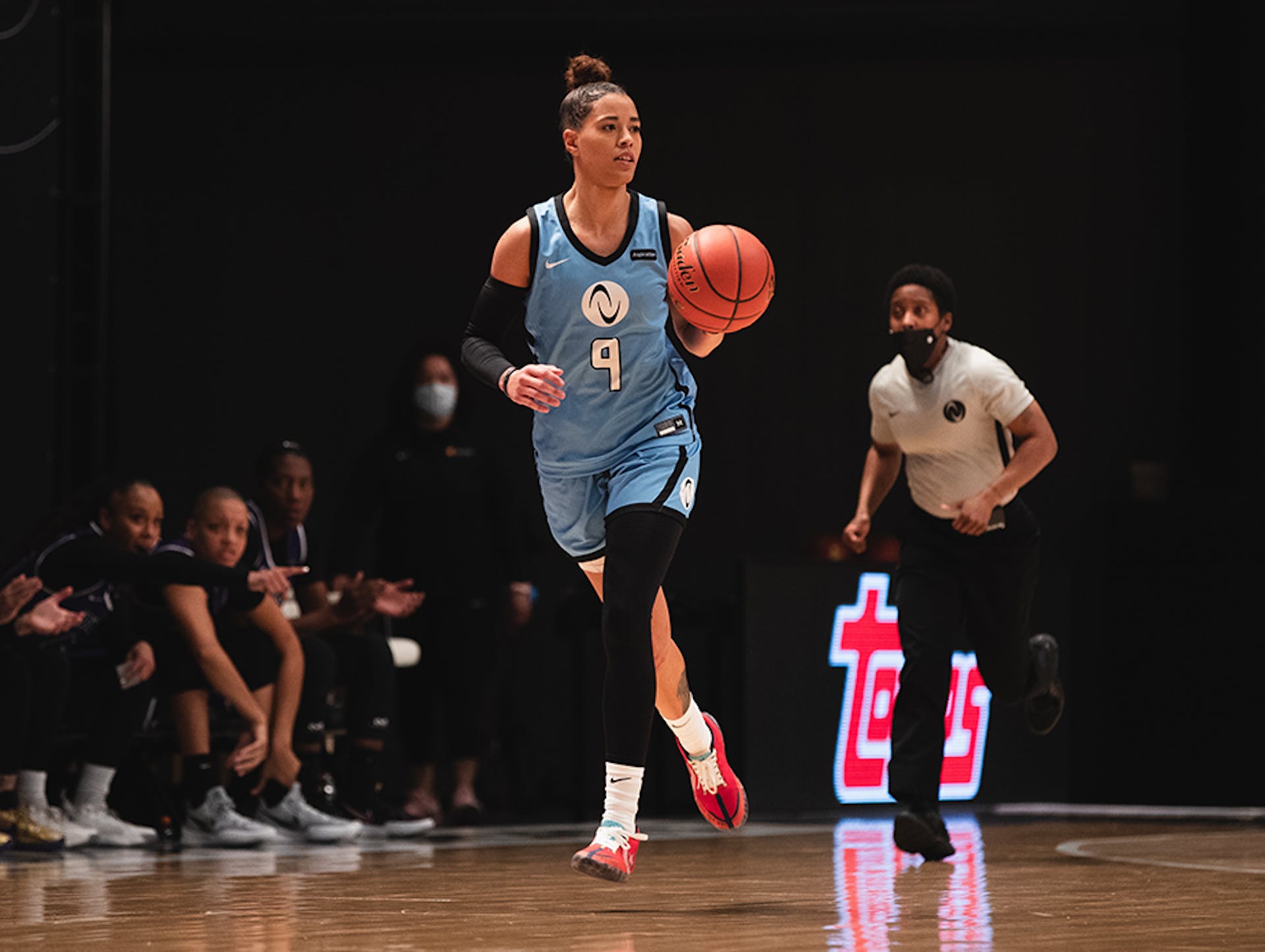 Courtney Williams added her second double-double of the season with 16 points and 12 rebounds, while captain Isabelle Harrison had 18 points.

Team Harrison is the third team to post a three-game sweep, joining Team Carrington in Week 1 and Team Brown in Week 2.

“We had a couple people from last week that she re-picked, and we already had our chemistry with a couple from last week,” said Sims, who reached double figures in scoring for the eighth time this season. “We were able to continue with that same energy and we were connected. That flowed over to this week and we just played basketball. We had a desire to win all three.”

Captain Natasha Cloud registered the league’s first-ever triple-double after finishing with 17 points, 10 rebounds and 10 assists. Kalani Brown, who left Friday’s game with an undisclosed injury, returned for a strong night with 17 points and six rebounds. DiJonai Carrington added 15 points and seven boards, while Drew Edelman chipped in with 10.

Despite an off-night of shooting percentage-wise, Team Cloud made it interesting down the stretch after falling behind by 16 in the fourth quarter.

Team Cloud hit 8 of 9 free throws during a game-ending 14-3 run, but it wouldn’t be enough for a come-from-behind win.

“Regardless of the loss, I’m really proud of our team for coming back from a really frustrating game last night and coming out there and competing today,” Cloud said. “(Team Harrison) had a solid squad … but I’m just proud of us for competing.”

Harrison, who improved to 8-1 on the year, remained in the top spot on the individual leaderboard, which will likely keep her place as captain for Week 4. Sims stormed into fifth place, which could work in her favor this week, as Lexie Brown is due to miss two games next weekend, which would disqualify her from being a captain. Brown sat in fourth place prior to Saturday’s nightcap, and if she remains there, the fifth-place player moves into the captain’s seat.

Team Harrison controlled the action early, opening an 8-2 lead thanks to game-opening, back-to-back 3-pointers by Harrison and Sims. With Team Cloud struggling to catch an early vibe, Team Harrison was able to build its lead to 17-8. Team Cloud closed the opening quarter with a 7-0 spurt sparked by Carrington, who had five of the points. Team Harrison hit 7 of 17 (41.2%) in the first, while Team Cloud shot just 35.3% (6 of 17), including 1 for 6 (16.7%) from 3-point range.

Team Cloud flipped the script in the second quarter, using a 19-13 run to take a 34-30 lead, with balanced scoring from its starters and bonus contributions from bench players CC Andrews and Laurin Mincy. Team Harrison responded quickly, as a 3-pointer by Sims sparked a 7-0 run that shifted the lead to 37-34. Team Cloud closed the quarter outscoring Team Harrison 6-2 and went into halftime with a 40-39 lead. Team Cloud improved its shooting dramatically by hitting 8 of 17 (47.1%) in the second period, while Team Harrison kept its hot hand by hitting 8 of 15 (53.3%). Team Cloud finished the half a perfect 10 for 10 from the free-throw line.

Team Harrison wasted no time out of intermission, as a 20-9 run sparked by the captain gave them a 10-point lead, at 59-49. Harrison scored nine of the 20 points. After a quick five-point answer by Team Cloud, it was another surge from Team Harrison, which closed the third with a 10-4 run to open an 11-point advantage, the biggest lead of the game. Team Harrison continued to improve from the field, hitting 12 of 18 (66.7%) in the third, including 10 of 14 (71.4%) inside of 2-point range. Team Cloud’s hot hand from the second quarter cooled, as it was just 5 of 14 (35.7%) from the floor in the third.

KEY MOMENT: Team Harrison overcame a one-point deficit at the start of the third quarter by scoring eight of the period’s first 10 points, taking a 47-42 lead on a jumper by Williams with 6:45 left in the period. Team Cloud trimmed the margin to 71-66 with 7:37 remaining in regulation before Team Harrison sealed the win with an 11-point run.

NOTES: Sims was named MVP 1, earning herself an additional 90 points and 564 points on the night. Williams ended Week 3 with 425 points after 60 points were added for earning MVP 2 honors. Captain Harrison added 30 points to her league-lead in MVP points with MVP 3 honors. She finished with 478 points.

Team Cloud earned 100 points for its second and fourth quarter wins, while Team Harrison took home 200 points for the game and remaining quarters.

In six games since missing Week 1, Williams has tallied 45 assists. … Cloud, who played all 40 minutes, also posted her fourth double-double of the season after shooting 3-for-9 from the field and a perfect 9-of-9 at the free-throw line. … Team Cloud sank 27-of-28 free throws in the game and out-rebounded Team Harrison by a 40-35 margin. … Carrington also played all 40 minutes in the contest, matching a season-high.