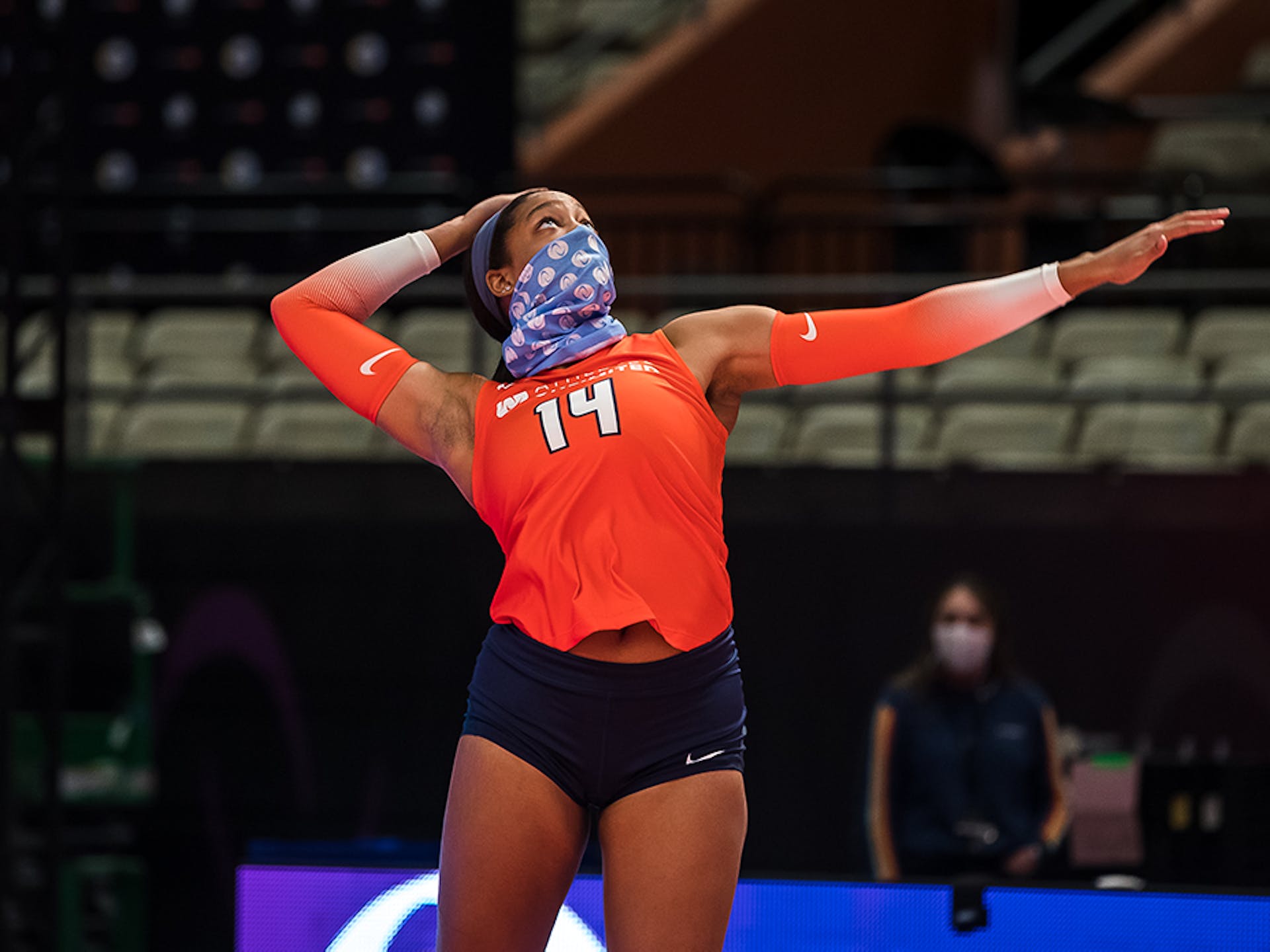 Leah Edmond did not enter her rookie season quietly.

Instead, the outside hitter appeared confident and poised from the moment she stepped onto the court for her first professional match with Athletes Unlimited. The University of Kentucky graduate was a spark of energy on the floor, stomping her feet and smiling anytime her team managed to win a big point.

In the first weekend alone, Edmond obtained 34 kills and five blocks while keeping her errors to a minimum. Her solid level of play placed her third on the leaderboard, making her a captain for Week 2. Another strong performance in Week 2 kept her in the same captain’s chair for Week 3, and, although Edmond fell out of the first four spots heading into Week 4, she was ultimately the first-round draft pick for the fourth week of play.

Yet, watching Edmond compete in Week 4, she didn’t seem like herself. She was making more hitting errors than usual. She wasn’t scoring and she averaged a 0.127 attack percentage, which was substantially lower than any of the previous weeks. Edmond, who always appeared bubbly, intense and passionate on the court, seemed deflated.

A few days later, Edmond announced she was ending her rookie season early. She’d been having increasing amounts of pain in her right shoulder. When she met with a doctor, Edmond was told she had a torn labrum and that she’d likely need to have surgery to repair it.

With only one more week of competition left in Athletes Unlimited’s inaugural volleyball season, Edmond decided to return home to begin her recovery process.

“At that point, I don’t even think I could have made it through a practice,” Edmond said. “I was on heavy painkillers and needed a 45-minute warmup to lift my arm above my shoulder. Because of how I played in Week 4, I knew I would have been doing a disservice to whatever team I ended up on because I clearly was not at 100%.”

Even with the pain in her shoulder, making the call to return home wasn’t an easy one. Edmond isn’t a stranger to playing through pain, citing that she’d previously played with a sprained ankle, knee issues and shoulder pain.

“I think the whole realization I was having during my rookie season was that I was still thinking in the college mindset,” Edmond said. “I realized that I can’t think of it like college because that’s not the stakes we have here; this is a whole different ballgame. So my big first pro decision was to stop playing.”

Despite the initial diagnosis, when Edmond returned to Kentucky, her doctors advised against having the surgery to repair her labrum. Instead, they recommended a rigorous rehab program. Edmond said that her doctors told her there’s a large margin of error for the labrum surgery. If they reattached her labrum even a fraction of an inch too tightly, Edmond wouldn’t be able to take her arm past 90 degrees. As a result, she wouldn’t be able to swing with the same amount of power she’s known for – even after her shoulder was completely healed.

Edmond agreed to give rehab a chance for a month. With aspirations to continue her professional volleyball career, she didn’t want to waste too much time and miss playing in Athletes Unlimited’s second season. If she had to relearn how to swing again after the procedure, she’d do it.

Rehab involved Edmond going to physical therapy three times a week for several hours. None of it involved attacking or even touching a volleyball. However, her shoulder began to feel slightly better and Edmond decided to stick with the program instead of having surgery.

Edmond wasn’t allowed to touch a ball again until September. Even then, practice came with strict stipulations.

Edmond was given a 10 step program, and for steps one through six, she could only hit a ball for 10 to 15 repetitions at 40% of her usual power. If she felt even an ounce of pain, she had to stop and then take two days off. For Edmond, a player who’s used to pushing through pain, constantly being honest with herself about how her body was feeling was a challenge.

“It was hard because I was getting so frustrated that I was in pain,” Edmond said. “I’ve never been a 40% hitter; I’ve always been 100% or you’re getting a tip. There is no in-between. So relearning that was hard.”

In September, Edmond graduated to hitting the ball at 60% and stayed there through the month of October. In November, she was finally cleared to swing at the ball with 100% power. Even better, she was completely pain-free.

“The first time I hit and I wasn’t in pain, I cried,” Edmond laughed.

As Edmond enters her second professional season, she’s prepared to play like her normal self.

“Going into this season, it’s exciting knowing that every day I feel good, unlike before where I felt good one day and was in pain the next,” Edmond said. “It’s exciting for me because I feel like I’ll finally get to show who I actually am as a player without being hindered by my arm.”

If Edmond was difficult to stop last season – when she quickly rose to the top of the leaderboard although she was in near-constant pain – she’s certainly going to be a force to be reckoned with this season when she’s feeling 100%.