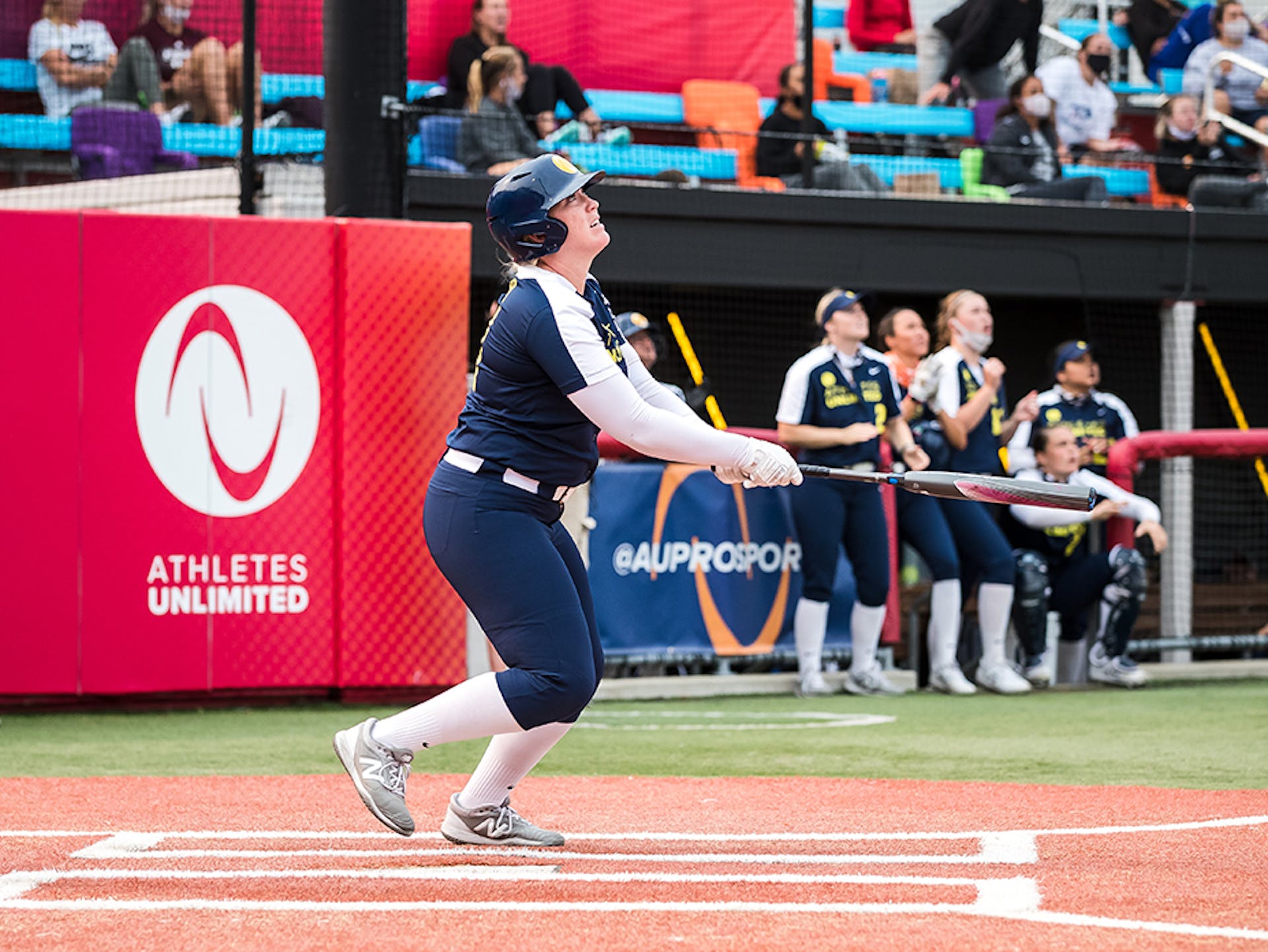 You didn’t need to see the stadium lights all lit up to know that the power was back on at Parkway Bank Sports Complex.

The hitters of Athletes Unlimited provided all the juice.

There has been only one game this season in which there was not a home run. Last Monday’s 2-0 victory for Team Osterman over Team Reed ended a streak of 23 games with at least one.

Things went back to business as usual Saturday.

In the day’s first game, Teams Ocasio and Warren combined for five homers. In the nightcap, Teams Osterman and Piancastelli hit four home runs between them, two coming by captain Erika Piancastelli in a losing effort.

Piancastelli moved into the Athletes Unlimited lead in homers with teammate Sahvanna Jaquish, with both having eight.

The day’s happiest homer, however, may have been he three-run blast hit by pinch hitter Jordan Roberts in the bottom of the fourth inning to give Team Osterman a 3-1 lead after Piancastelli hit one in the top half.

For Roberts, it was her second homer of the season in only eight at-bats. Earlier this season, she homered in her first professional at-bat.

Her smile as she rounded the bases may have been the widest of the entire day.

“It was amazing,” said Roberts, who earned MVP 1 honors and 60 points on top of her 40 for the homer and 120 team points. “It’s a great opportunity to be here, just to have the chance for Cat (Osterman) to trust me in that position. To help the team was amazing. I was really happy.”

Piancastelli earned MVP 2 and 40 points to go with her 80 for the two home runs. Her three-run drive to left-center in the fifth against Osterman – who had relieved starter Haylie Wagner – highlighted a four-run top of the fifth.

It was Piancastelli’s second multi-homer game of the season.

“I was seeing the ball pretty well today,” she said. “I think I was just having a lot of fun with my team, and when I’m having fun with my team, it allows me to be at peace in the box and just be myself and focus on the pitches. My team helped me a lot today, and I’m really proud to be on the Blue team.”

Vidales added icing and insurance in the sixth with a solo homer, a big hit over the all in left field. In the third inning, she flied out to the wall in right.

This time she made sure to get it all.

“It was funny because Erika and I were actually talking about that before the game,” she said. “I was just really comfortable in the box. When I’m able to spray to every side of the field, that’s how you know you’re really seeing it and your body feels right, and you’re on it. I had to make sure I got one before I got out of there.”

“She was definitely seeing it,” Piancastelli chimed in.

The players of Athletes Unlimited are making sure to have fun. Team Gold home run hitters were presented with a large chain to wear around their necks after the rounded the bases.

Now for the back story.

“It was actually kind of funny,” Vidales said. “Mizuno sent (teammate) Samantha Show a chain that she had. She brought it out and was like, ‘Hey, funny story. They just sent this to me. I just got it. Let’s put it on whoever hits a home run.’ Jordan actually put it on the first time. I think we weren’t ready for it, for someone to hit a home run. So it was kind of delayed. Whenever I hit mine, it was already in the spot it was supposed to be in at a good grabbing spot.

“It was just really fun. It was just something that we do. We like to plan on each team the home run celebration. It was all good fun.”

There was some good pitching in this game, despite the home run barrage. Osterman earned the win in relief of Wagner and improved to 9-1. Wagner was very good. She worked the first four innings and then finished in the seventh. In her five innings, she allowed five hits and only one run.

Team Gold outfielder Morgan Zerkle used her speed for two singles, including an infield single. She also stole second and third in the fifth, getting 10 points for each of those steals in addition to 10 each for the singles.