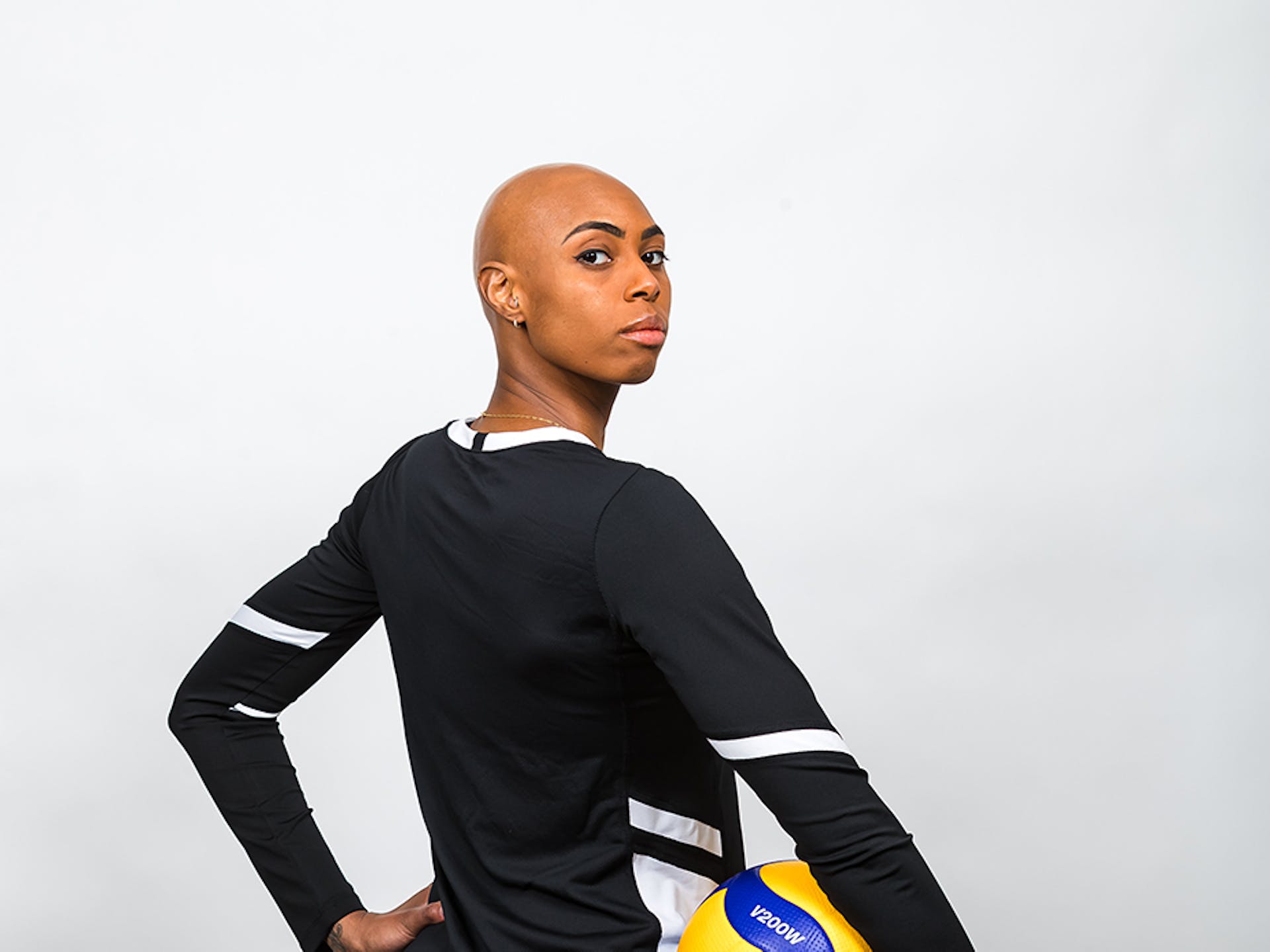 In 2019, while playing professional volleyball in Brazil, I was harassed by a fan who posted racist comments directed toward me during an online stream of a live match. While, unfortunately, this situation wasn’t anything new to me the experience of the comments being shared worldwide was. The following morning the remarks had spread throughout the entire online volleyball community. My phone exploded with reactions to the viral moment, many condemned the hate speech and some did not. An experience that in the past had been short private moments of pain had very quickly turned into public shame I had to relive every time the offensive message was shared with the next source.

Although there was action taken by my club to issue an anti-racism stance and condemn the hateful message, there was no one to make sure my voice was heard, nor to take into consideration the emotional toll this would have on me. The following day I had to show up to practice, perform, smile and proceed with “business as usual,” an unfortunate reality for many Black Americans.

After the incident, I had a choice to make: to tough it out and move on like I had done in the past or to take personal and legal action. I made the decision to report the incident to the police and charge the perpetrator not just for me, but because I know that racism is alive and well in the world of sports and it’s time for something to be done about it. I needed to show all the women and girls that look like me, who I know will face the same injustices as athletes, that they aren’t alone, and they shouldn’t be ashamed to speak up about the adversities we face.

The truth is racism in sports is individual, organizational and structural and it touches every single Black, Indigenous, and person of color (BIPOC) across every sport. So, what are we doing to break this cycle?

We’ve seen racism show up in various ways across sports. Soccer players are having bananas thrown at them on the field. Volleyball players are receiving threats on social media. Racial slurs are yelled at basketball players from the sidelines. These are the individual actions of racism that we read about, and while most people claim to not condone this behavior, athletes continue to feel diminished and oppressed whether these actions are big or small. In fact, I would challenge that it’s the constant microaggressions that people don’t even recognize as racism that truly do the most damage. It’s when a coach thinks it’s playful to call the Black girls ‘the chocolates’ or when a teammate says you’re only able to jump higher because you’re Black. These are my stories but all BIPOC players have them.

Jazmyn Jackson, a former USA softball national team player and member of Athletes Unlimited says that she one hundred percent has experienced microaggressions within her sport. “I don’t know if anyone ever saw me play without weave, braids or clip-ins in my hair because the one time someone saw my natural hair, they asked me ‘what happened?’ in a condescending tone. When [the] definition of a ‘cute game day hairstyle’ has nothing that’s natural to your own hair,” sometimes we don’t feel included in our own sport.

Every small jab, whether it’s about appearance, capabilities or even hair is a constant reminder to Black women that we’re different and it insinuates we don’t belong.

Organizational racism shows its face almost immediately in the entry level of sports with costs involved to play. I am privileged to have grown up in a middle-class income household. My parents sacrificed their wants to pay thousands of dollars a year to enroll me in club travel ball. Programs and organizations do exist like Starlings, a volleyball club that has minimized costs and allows work opportunities in exchange for monthly dues. Still, they can only cover so many kids and the problem remains. BIPOC players are the first to be cut out of sports because of costs.

Mira Shane, an Athletes Unlimited lacrosse player going into her rookie pro season has felt the financial strain sports has had on her family. She remembers exactly how shocking the cost of her first set of goalie gear was and recounts hearing her mom say, “’I hope we can get this money back,’ as in ‘I hope we get a return on this investment.’” That was a moment that she often revisited while in college. Her mindset was, “I am playing this sport as a career. I have to work harder each season and get better so I can get those scholarship bumps. This is a privilege.”

The barrier created by financial costs has contributed to both a lack of representation and tokenism in sport. I have played fourteen years of volleyball and every single team I have played on has been majority white. My family was so proud that I chose a collegiate program that had five out of twenty-one players of color. At the time that felt like a lot and we are slowly beginning to see this change but not drastically enough.

Even for those of us who are able to pay and endure the individual racism, it’s still hard to gain visibility even at the pro level. As the lacrosse world is slowly trying to shine light on its BIPOC players, they are few and far between. Shane shared, “[As a bi-racial woman] I wish I could do more. Lacrosse needs more accessibility, exposure and authenticity. More pros in the BIPOC community should be able to share their experiences as well as have White allies amplifying them.”

Structural racism in sports can be seen in the lack of exposure to our young athletes of color. “It’s a trickle-down effect,” said Shane, “a mix of what kids are seeing and what athletes in certain sports are ‘supposed’ to look like”. Shane experienced this personally last summer with a new youth player she was coaching. “When I introduced myself the student said, ‘My mom told me I was going to get a coach and I thought she’d have blonde hair and different color eyes [than you].’ I wasn’t going to be mad at a six-year-old but it really highlighted what everyone else sees in our sport.”

Just like Shane, I didn’t realize at the time that these experiences were taking such a toll on me. They were slowly internalized and affected my confidence. I didn’t feel like I could be a vocal leader unless I was proving myself all the time as a physical leader. Shane feels that being one of a few BIPOC women in her sport is an added weight on her shoulders. “I have a responsibility to do this for the community and for the culture. It’s an intense reality.” We want to change these issues surrounding us but we really just want to play the game that we love.

There is one organization that is going above and beyond to break this cycle. Athletes Unlimited, a network of next generation professional sports leagues, is designed with a player-centric model and has given athletes, especially women of color, not only a spot at the table but a chance to make a real impact.

Prior to the launch of its inaugural softball season in 2020, Athletes Unlimited created a Racial Equity Working Group to address inequities within sports and to make sure its own work is in alignment with its commitment to racial equity. Athletes Unlimited takes into account every level of the organization from the players to the staff as well as content, partnering organizations, and down to the referees. Shane, a lacrosse rep for the group says, “Over the year we’ve created 46 initiatives that span every single facet of the league. Not only are we talking about them, we are implementing them.”

One of those initiatives is called Friday Night Lights, a weekly in-season session dedicated for Athletes Unlimited athletes to learn and discuss issues such as gender, mental health, LGBTQ+ rights and racial equality in sports.

Athletes Unlimited has also created free and lower cost tiers within their Unlimited Club, and is streaming eight matches without a paywall to make more matches accessible to all fans.

Most recently, Athletes Unlimited has begun partnering with the Starlings organization, which works with low-income and underrepresented young volleyball players. Once a week via zoom pairs of professional players will mentor groups of youth players from various sister branches all over the US, providing exposure to those who are most unrepresented.

I have never had a safe place within my sport to speak openly about some of the injustices that have happened to me but being a part of a league that not only acknowledges the issues that I face as an athlete of color but is also taking steps to make real change is more than I ever imagined. I am proud to be an Athletes Unlimited athlete.