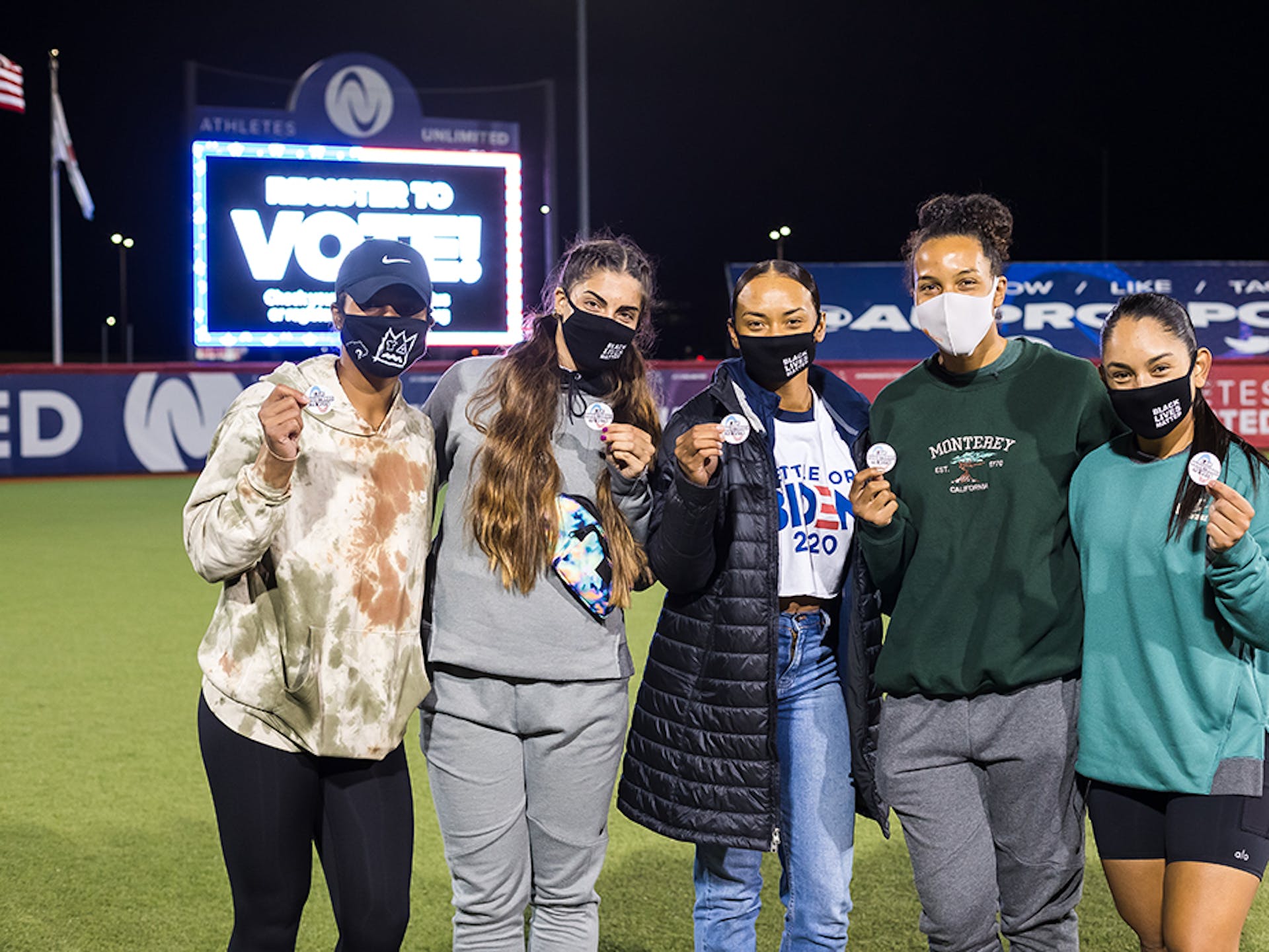 If athletes have proven one point over the course of 2020, it’s that they’re unafraid to unite, facing social injustice together while they simultaneously pursue greatness on the field.

That was the impetus behind what Athletes Unlimited players Jazmyn Jackson, Aleshia Ocasio and Erika Piancastelli dubbed, Friday Night Lights. Born out of a list of recommendations made by the racial equity working group within Athletes Unlimited, Friday Night Lights has evolved into a series of weekly meetings within the Athletes Unlimited shield where players can talk about issues they’re facing, such as LGBTQ+ rights, racial discrimination or battles with body image. Opening up about individual experiences helps them see how to tackle these causes together.

“Being able to get on the same page about everybody being educated on these topics is so important,” Jackson said.

It was that conviction that prompted Jackson, Ocasio and Piancastelli to jumpstart the initiative, even though neither of the athletes have jumped into that type of leadership role in the past.

“I didn’t know I liked talking in front of people,” Piancastelli said. “I thought I was very introverted. It’s probably one of the first times I’ve been hands on, but in the space we’ve created, I feel super comfortable. It’s been a blast to be myself and guide them through Friday Night Lights.”

Each meeting starts with an ice breaker they liken to speed dating, where they ask seven questions and have players talk to a new athlete for every question. Then, they’ll share some facts about the night’s issue before giving athletes in attendance the chance to tell their own stories from the mic.

“I think all the topics are absolutely necessary to talk about and be educated on as a group, given that we have so many different personalities and backgrounds here. It’s so important to get a sample of different women in the country and what page we’re all on,” Jackson said.

The meetings are meant to encourage community and learning, taking advantage of the diverse age range and personal experiences of Athletes Unlimited players. None of the leaders force a particular viewpoint but see themselves as merely facilitating discussion and trying to embrace everyone.

“It’s a great atmosphere to get to know the walks of life the person next to you came from,” Ocasio said.

Even though athletes become friendly with each other over the course of their careers, the intense focus on competition usually doesn’t leave a lot of time for deep discussions about racial inequities or body image. Add to that the extra complications of daily life such as school, work or family responsibilities, and players often miss the opportunity to learn from each other’s experiences in life off the field.

One side effect of the Athletes Unlimited shield in Chicago has been the extra free time with almost no outside commitments, leaving more opportunity to connect.

“There’s a heavy focus on practice and competition usually with teams and there’s no space or time to have these conversations. It’s kind of cool that we’re in a bubble. That really helps the situation,” Jackson said.

The initiative was met with support from Athletes Unlimited staff, who found ways to foster the ambitions of the players. “They give us snacks while we’re walking out of Friday Night Lights, they give us a mic, they stay and they wait in the facility for us to leave. They’re very supportive of the efforts we have in our bubble. They’ve been extremely supportive,” Ocasio said.

“We’re usually allowing others to take it in, learn, talk to one another and engage,” Ocasio said. “It’s gratifying for me to be able to give other people the opportunity to get to know one another in a safe environment. Every time we leave, my bucket is completely filled whether I tell my story or hear others, just knowing people are opening up their world and being vulnerable.”

That vulnerability is something athletes are grateful for. “After the LGBTQ+ session, I looked around and saw people having conversations and crying. People have come up and thanked me so much for the opportunities to get to know one another and open their eyes and learn,” Ocasio said.

There’s only one thing the women wish they could change about Friday Night Lights — being able to host more of them.

“We wish we could speak about so many other things because so many things are important to this world,” Jackson said.

With the season coming to a close and the time in the shield over, it’s now up to them to take on the next step — heading out into the world to apply everything they’ve learned from their fellow athletes.