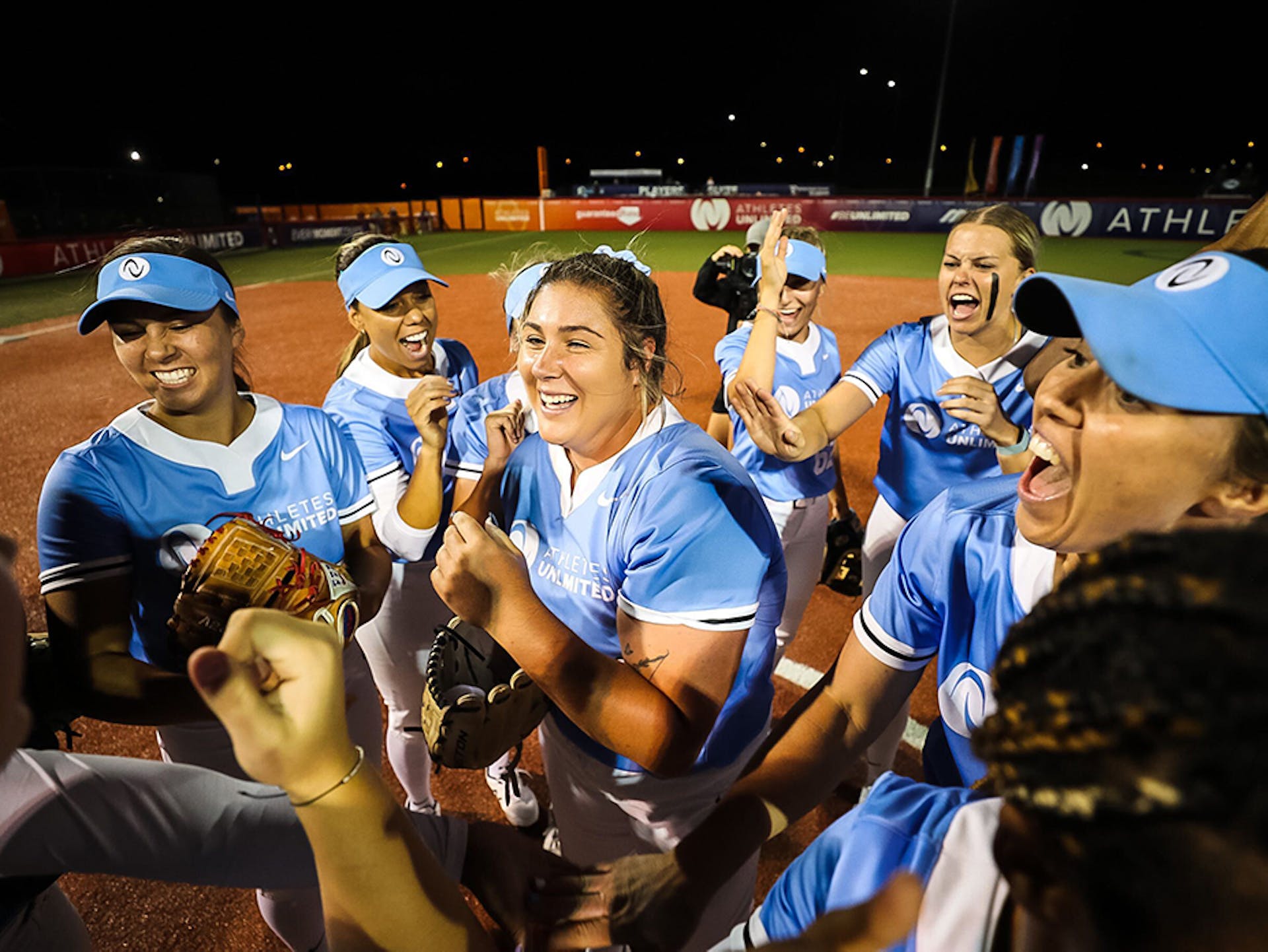 Taylor McQuillin had that look about her, the one pitchers get when they dare you to take the ball out of their hand.

McQuillin kept the ball in her left hand and kept Team Jaquish (Blue) in the game long enough Sunday night for her teammates to take care of things on the offensive end.

It took extra innings for that to happen, as a tie-breaking RBI double by captain Sahvanna Jaquish followed by a two-run homer by Amanda Chidester gave the Blue team a 5-2 victory over Team Osterman in eight innings.

McQuillin came on in relief of Carrie Eberle in the second inning and stranded three runners. She worked 6.1 innings and gave up four hits and one run for her third win of the season against no losses. She also pitched four innings Saturday in gaining a win.

Going deep again was not a problem.

“I think that was the goal,” McQuillin said. “We’re trying to save as many of the pitchers’ arms as we can. When I go out there, the intention is go as long as I can for the other pitchers on our staff to save their arms for the rest of the games. I had all the faith in Carrie in the world. She started again for the second day, so she’s a little fatigued as well. So I knew I had to go out there and do it for her and shut it down and keep our team in the ballgame.”

When asked if she could pitch again Monday, McQuillin did not hesitate.

“Absolutely,” she said. “I’m doing whatever Captain over there says what’s going on.”

Speaking of captains, Jaquish and Gold captain Cat Osterman managed this one like the deciding game of a playoff series, with moves back and forth, pinch hitters and pinch runners.

“I feel like this has challenged my coaching abilities to the utmost, the highest level,” Jaquish said. “I’m trying to pull people in and take people out. These are all professional athletes. Thank God I have Joey Lye; she’s a great facilitator for us. She’s great level-headed … when things get up and down, Joey’s just steady.”

Team Osterman scored a two-out run in the first inning on singles by Kelsey Stewart, Gwen Svekis and Jessi Warren against Eberle.

Team Jaquish strung together three straight hits to tie the game in the third. Lilli Piper doubled to left-center, with Ciara Bryan running for her. A single by Sis Bates sent Bryan to third, and Aliyah Andrews brought Bryan home with a single to right.

The Gold team got the run back in the bottom half against McQuillin. With the bases loaded and one out, Katiyana Mauga pinch hit for Jazmyn Jackson and hit a sacrifice fly.

Gold starting pitcher Odicci Alexander was in the middle of all the action in the fifth, when Team Jaquish tied the game at 2-2. Bates led off the inning with a double to left field. Andrews singled back to Alexander, who threw the ball into right field for an error that scored Bates. Alexander quickly redeemed herself when the next batter, Kelsey Harshman, bunted the ball. It looked like it might die in front of the circle, but Alexander reacted quickly and made a diving catch.

Osterman’s machinations included turning to Jessica Burroughs after Alexander pitched five strong innings. Osterman put herself in for a 1-2-3 seventh before going back to Burroughs for the decisive eighth.

Harshman started the extra inning as the runner at second base. She came home as Jaquish wasted little time greeting Burroughs with her double. Chidester put things out of reach with her Athletes Unlimited-leading sixth homer.

McQuillin was the game’s MVP 1, followed by Chidester and teammate Sis Bates, who had a single and a double.

“It’s been incredible,” said Bates, a first-year player in Athletes Unlimited. “My experience so far has been like anything I could have dreamed of. Playing with these athletes I’ve watched my entire life, it’s the coolest thing ever. SJ being my captain, I’ve looked up to her for a long time. I’m seriously having the time of my life.”