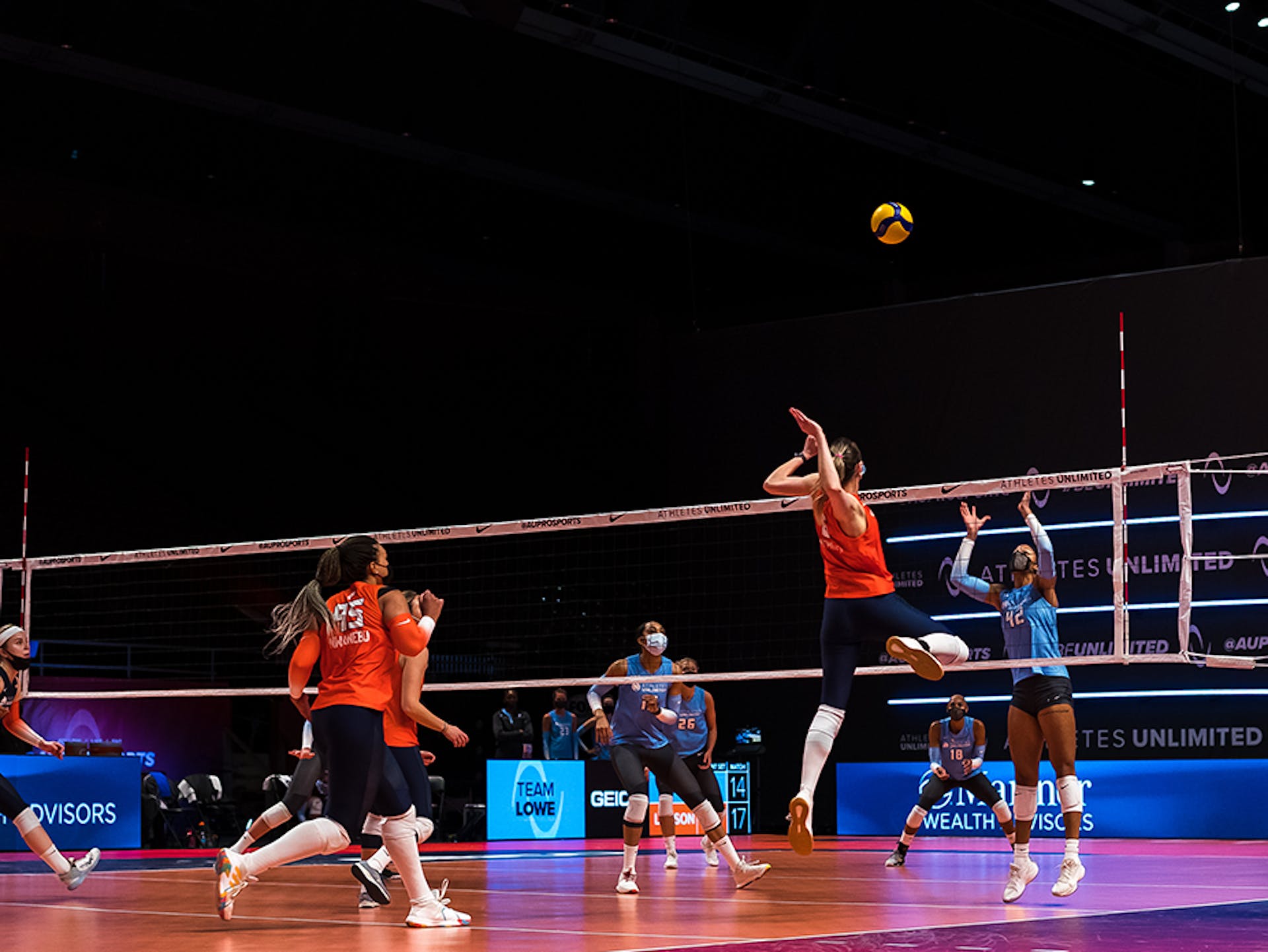 In their second match of the weekend, Team Larson defeated Team Lowe in two out of three sets and won the match 70-58. Team Larson obtained 13 blocks throughout the match, making it difficult for Team Lowe to consistently obtain kills.

Heading into the night, Team Larson was prepared for what to expect from Team Lowe’s attack strategy.

“We had been practicing against this team during the week, so we knew that they were going to be running a little bit of a faster tempo,” middle blocker Taylor Sandbothe said. “I think our overall strategy was to block up and over and straight. Obviously, they have a lot of powerful hitters and Karsta [Lowe’s] getting a lot of those balls, so we were always keeping an eye on her, but our plan was to just stay balanced and make clean moves on everybody across the board.”

Team Larson established a strong win margin in the first set, defeating Team Lowe 25-16. The team quickly built a 7-2 lead with three blocks, two that were against Lowe and one that was against outside hitter Symone Abbott. Midway through the set, Team Lowe stalled Team Larson’s efforts and closed the gap to 14-17, but Team Larson maintained their lead. At 21-16, Larson stepped to the back line and closed out the set with four consecutive serves.

Contributing to their win was the fact that Team Larson ran a more evenly distributed offense, with Larson, Aury Cruz, and Ebony Nwanebu each obtaining four kills in the first set while setter Kaylee Manns earned two. On the opposite side, Lowe earned five kills and was the only member of her team to gain more than two.

A similar theme followed the second set as Team Larson continued to get more digs than Team Lowe and serve received more efficiently. Although outside hitter Deja McClendon and Lowe combined for 11 kills, it wasn’t enough to overcome Team Larson’s efficiency as Manns continued to find success with multiple hitters, and Team Larson took the set 25-17.

Entering the third set, Team Larson led 50-33 in overall points, and it seemed highly unlikely that Team Lowe would manage to overcome the point difference to win the match. Yet, 40 win points still hung in the balance as both teams headed into the last game.

In the final set, Team Lowe jumped to a quick 7-1 lead as Team Larson made several hitting errors and Abbott had two consecutive kills. Abbott continued to be a crucial scorer throughout the rest of the game, ending the set with seven kills.

While each team managed to accumulate multiple serving runs throughout the set, Team Larson could never overcome the gap that Team Lowe had built in the beginning of the game. Team Lowe finished off the final set 20-25, but Team Larson won the entire match 70-58. For their two set wins and their match victory, Team Larson earned 140 win points for each team member, while Team Lowe earned 40 win points.

Larson finished the night with both a strong defensive and offensive game, earning eight digs and three blocks while also having two aces and 15 kills. She was voted MVP 1, earning 60 points from the vote for a total of 390 for the match.

Cruz finished the night with a .390 attack percentage and 9 kills on 18 attempts. She had one block and 10 digs and earned MVP 2 honors for 40 points, putting her at 288 overall.

Sandbothe earned four blocks throughout the match, along with four kills and two aces, earning MVP 3 honors. The vote granted her 20 points, putting her at 268 in total.