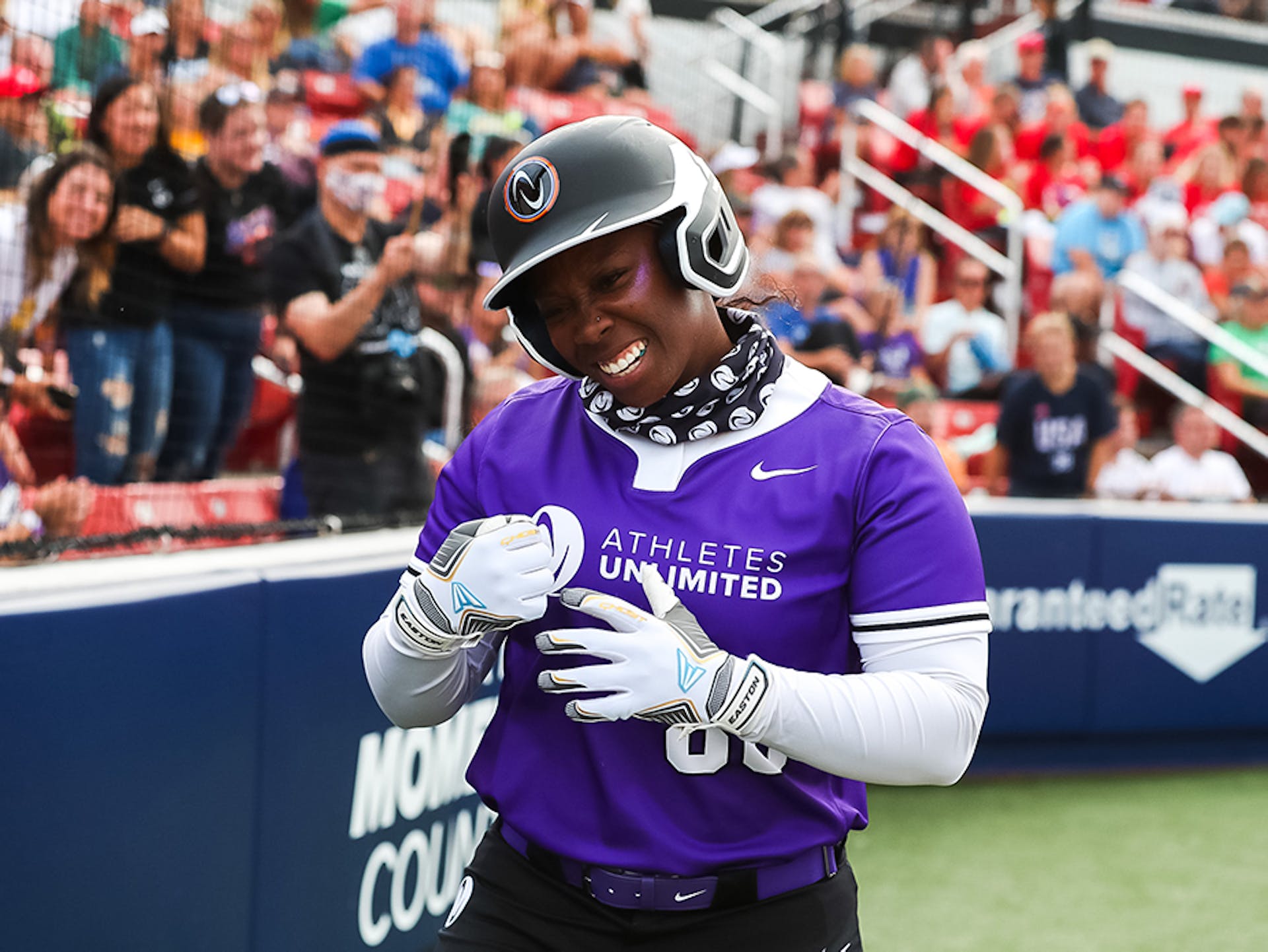 That’s Cat as in Cat Osterman, who is retiring after Monday night’s season finale.

There was so much to appreciate on this warm and windy autumn afternoon, from power hitting to great defense to exciting plays at home plate.

When it was all done, it was the fans in the big crowd who were doing the appreciating after perhaps the most deliciously entertaining game in the two-year history of Athletes Unlimited.

Osterman figured prominently in the game, coming within inches of victory but eventually taking the loss in relief.

On one hand, the game was a great advertisement for Athletes Unlimited. Ever gracious in defeat, Osterman said everyone should be beyond that by now.

“I think at some point we need to be tired of calling it an advertisement because we’re putting great games up day in and day out right now,” she said. “Ninety percent of the games we’ve played this season have been tough, great games that no one wants to be on the losing side of.

“This sport is amazing. I just want to tip our hats to Athletes Unlimited for giving us the opportunity.”

There is a lot to unpack from this game.

The teams were tied at 7-7 after seven innings, thanks to heroics by both sides’ players. Each team scored in the eighth before Purple pushed across two in the top of the ninth against Osterman. Sydney Romero hit a bases-loaded sacrifice fly to score the go-ahead run, Nadia Taylor bunted for a single to add an insurance run.

Taylor enjoyed the long and the short of it. Her solo homer in the top of the seventh with two outs tied the game. Riding a favorable wind, the ball hit the top of the wall in right-center and bounced over, preventing Osterman from getting a victory in relief.

Such are the vicissitudes of softball.

“I thought I hit it well,” Taylor said of the home run, her first of the year. She also earned 60 bonus points for being named MVP 1 of the game. “I didn’t know that it was going to get out. I was just trying barrel it up.”

As far as getting her hits off Osterman, Taylor said it was special.

“Honestly, she’s amazing,” Taylor said. “She is the best, I would say. Those are my first two hits ever off of her. Kudos to her and what she does. She’s amazing.”

In the half-inning before Taylor’s homer, Team Chidester scored three runs to go ahead 7-6. Jessi Warren hit a solo homer to lead things off, and Jordan Roberts later connected on a two-out, two-run homer to put her team up 7-6 against reliever Odicci Alexander.

In came Sara Groenewegen to relieve Alexander. She quickly ended the inning with a strikeout and then worked out of bases-loaded trouble in the top of the seventh.

“As long as you get the team back to your dugout with the least amount of damage, that’s all you can ask for,” said Groenewegen, the game’s MVP 3. “When you’re put in moment where you have to compete, it either elevates you or it makes people crumble. I think I’m built for those moments.. I was happy to get my team back in the dugout with the least amount of damage that I could so they could score runs.”

Team Jaquish jumped to a 3-0 lead in the first inning, with two runs coming on a homer by Tori Vidales. Taylor later added a run-scoring double.

Amanda Lorenz led off the bottom of the first with a home run, her first of two on the day and her second multi-homer game of the season. She earned MVP 2 honors.

Morgan Zerkle hit a two-run homer for Team Jaquish in the second to make it 5-1, but Team Chidester refused to go away, scoring single runs in the third, fourth and fifth innings before exploding later.

As for Osterman, she gets one more day in the sun – or under the lights Monday night. She credited Chidester for helping her soak up the sights and sounds of the final weekend.

“I have to actually thank Chiddy,” Osterman said. “She did a really great job. She told me I was going to be in relief the first two games, and we would figure Monday out later, just to kind of let me relax and be ready to go. For whatever reason this season, relief (pitching) has been better for me. I’ve come in a little bit looser.

“You know, I’ve known this is going to be it. It’s not like I’ve just decided this a couple weeks ago. I’ve known this. Just soaking up being around the great people, because that’s what this endeavor gives us – great people to hang around and be around. Just trying to pour into my team,  pour into anybody I’m hanging out with to talk the game, talk life, whatever it is. But just trying to make the most of it and have fun out there on the field.

“I think for a while I had forgotten this game is supposed to be fun.”