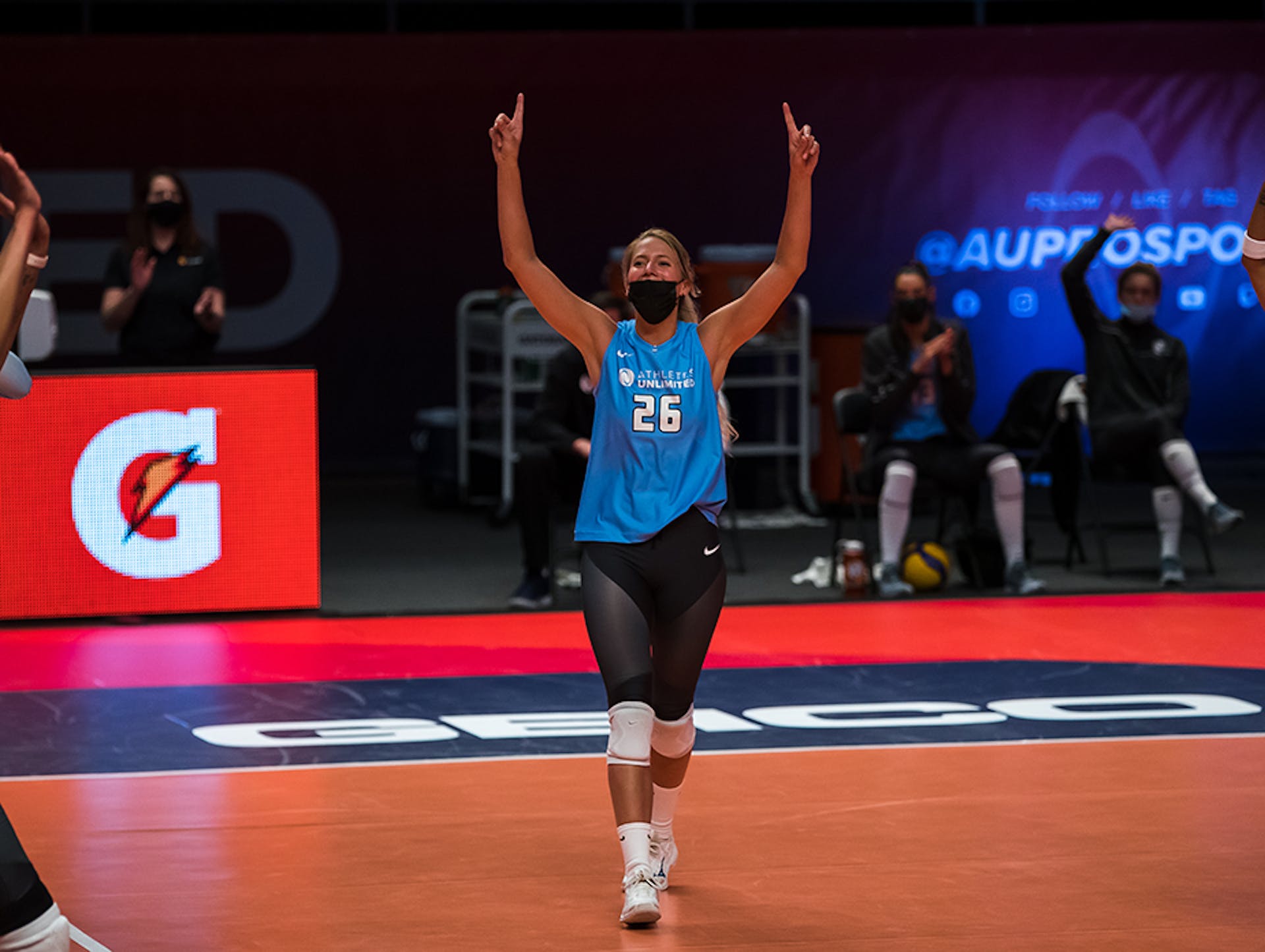 In the second sweep of the Athletes Unlimited Volleyball season, Team Edmond defeated Team Lowe 25-14, 25-20, 25-22 and won the match 75-57 — the largest point margin win by any team yet. For their win, each team member on Team Edmond received 180 win points.

Coming into the match, opposite Karsta Lowe was second on the leaderboard and outsider hitter Leah Edmond was fifth, but after the match, Edmond had overtaken Lowe for the No. 2 spot.

“Our strategy really was to focus on our side, what we were doing, and how we could bring things to the table that could potentially stop them,” middle blocker Taylor Sandbothe said. “Being conscious of what they were going to do, obviously teams have patterns, but we were really more focused on handling ourselves and accomplishing what we wanted on our side of the net.

Team Edmond had been evenly distributing their offense throughout the weekend, and Sandbothe contributed five kills and two blocks to her team’s victory on Monday night.

Team Edmond took the first set in dominating fashion, winning 25-14. An aggressive serving stance allowed Team Edmond to control the momentum of the game, finishing the set with four aces.

Five blocks from Team Edmond also made it difficult for Team Lowe to establish a high level of energy or find their flow and allowed Team Edmond to build on their momentum. Team Edmond was never in service receive for more than two points.

In Set 2, Team Edmond continued their level of intensity and maintained a lead throughout. Blocking continued to be a large point contributor as they tallied another five.

Going into the third set, Team Lowe would need to hold Team Edmond to just 14 points to win the overall match down 35-50.

A sub at 6-8 for Team Lowe put setter Erica Handley in charge of running the offense, and she immediately found a fast connection with her hitters. A spark of fire finally emerged from Team Lowe as Lauren Gibbemeyer, Lowe, and Odina Aliyeva each had a kill three consecutive points in a row and they took their first lead of the match at 9-8.

Handley also contributed a block and a kill shortly after entering the match to help her team gain the lead.

Yet, midway through the set, three consecutive kills from outside hitter Aury Cruz gave Team Edmond the lead again. A fourth kill on her fourth consecutive attempt put Team Edmond up at 16-15, and secured them the match.

“I had not one clue [we won the match so early],” Edmond said. “I think because the point differential was so big in that match, I thought that whatever happened, we would still win it. Yesterday, and the day before, we knew that, ‘Hey, we need to get to this point, ’ so I think it just depends on the match.”

Cruz also finished off the third set with a kill, having her best attack percentage of the weekend at .390 for 10 kills on 23 attempts. On top of her impressive hitting performance, Cruz had nine digs and two aces, earning MVP 1 honors for 60 points and 383 in total.

King finished the night with 37 assists, one ace, and four stuff blocks, an incredible amount of blocks for a setter in one match. She was voted MVP 2 honors for an additional 40 points, to finish the match with 355.

Edmond had another impressive night overall and had five blocks and 10 kills, being voted MVP 3 honors for 327 total points. She stands in the No. 2 spot on the leaderboard and is likely to be a captain in the Week 3 Draft, happening live on Facebook on Tuesday, March 9 at 6:00 p.m. ET/5:00 p.m. CT.