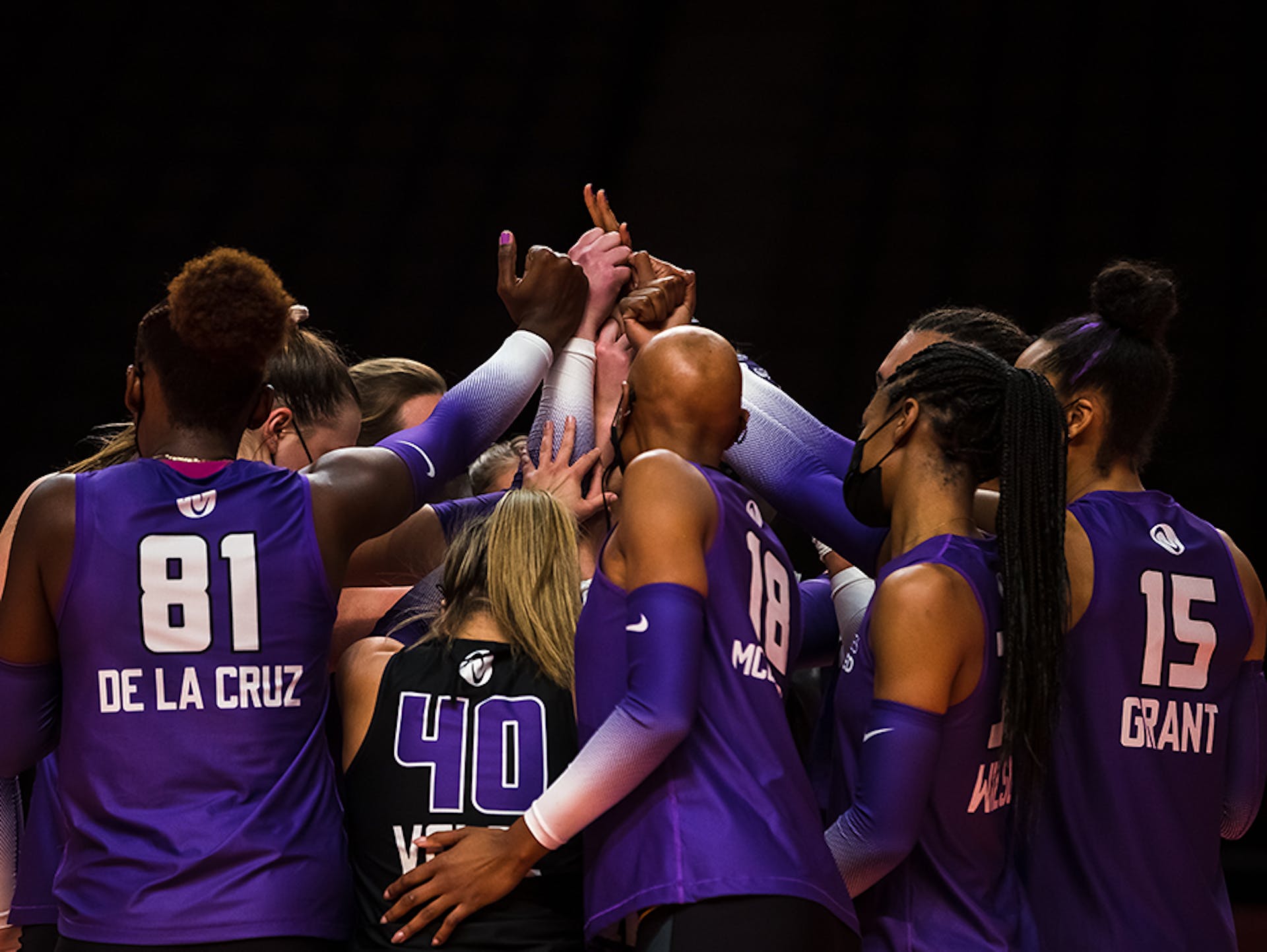 In Sunday’s matchup between Team De la Cruz and Team Edmond, defense was key, making it difficult for either team to terminate the ball and creating numerous long, suspenseful rallies throughout the match.

In the first set, a four-point serving run from middle blocker Ali Bastianelli helped Team De la Cruz gain momentum. During the run Olympian and team captain Bethania De la Cruz had two kills and a block from Nia Grant helped build a small lead at 6-4. Team Edmond middle blocker Taylor Sandbothe ended the run with her own block, turning to give one of the teammates a chest bump – something that is becoming one of her signature cheering moves.

Bastianelli earned four kills in the first set, with several of them taking place on a slide. Setter Kelly Hunter involved herself in the offense and had three kills on three attempts by the end of the set. Her attacks forced Team Edmond’s block to alter their focus and stalled the block long enough to open up the net for her outside hitters.

“It’s kind of interesting because Kelly and I haven’t played together until yesterday, so we’ve had a very limited amount of time to get that connection going,” Bastianelli said. “I think just having played against her in the Big Ten, I know what she’s capable of and we were kind of leaning on each other, just making up for what miscommunication happened and I think we did a good job of talking about every set.”

Steady play from Team De la Cruz, along with several long rallies ending in their favor, allowed them to build their lead to eight points, finishing the set at 25-17 and earning 40 win points for each team member.

In Set 2, Team Edmond emerged with a renewed sense of energy and intensity.

De la Cruz and opposite Ebony Nwanebu led their team in kills with three each, but three stuff blocks from Molly McCage and two from setter Brie King made it difficult for any hitter on Team De la Cruz to get into a rhythm. With each block, Team Edmond’s energy increased as they came together to celebrate in the middle of the court.

Late in the game, outside hitter Aury Cruz had three kills on three attempts, helping her team build their lead to 19-13. From there, Team Edmond maintained their lead and won the set 25-17, the same score they were defeated by in the first set.

Entering the third set, the two teams were tied at 42-42 overall, which meant whichever team won the final set would claim the overall match as well, and 100 win points (+40 for the set win and +60 for the match).

Team De la Cruz became more creative in their scoring tactics again in the third set, relying on numerous hitters to find the floor. De la Cruz had four kills, Nwanebu had eight, and outside Erica Wilson had one. Diversifying their offense helped to win Team De la Cruz the set at 25-17 and the overall match at 67-59, earning each team member 100 win points.

Nwanebu hit .240 with 11 kills on 33 attempts and eight digs for 92 stat points. For her impressive play and the intensity that she brought to the court, she was voted MVP 1 for an additional 60 points to put her at 316 overall.

Hunter earned MVP 2 honors and earned 40 points. For the night, she had 33 assists, eight digs, and three blocks for 313 points total.

Team Captain De la Cruz finished the match with 13 kills and a .333 attack percentage. She earned 20 points for being voted MVP 3 and had 314 points overall.

All the feels! Athletes Unlimited Softball players gear up for final games of the season