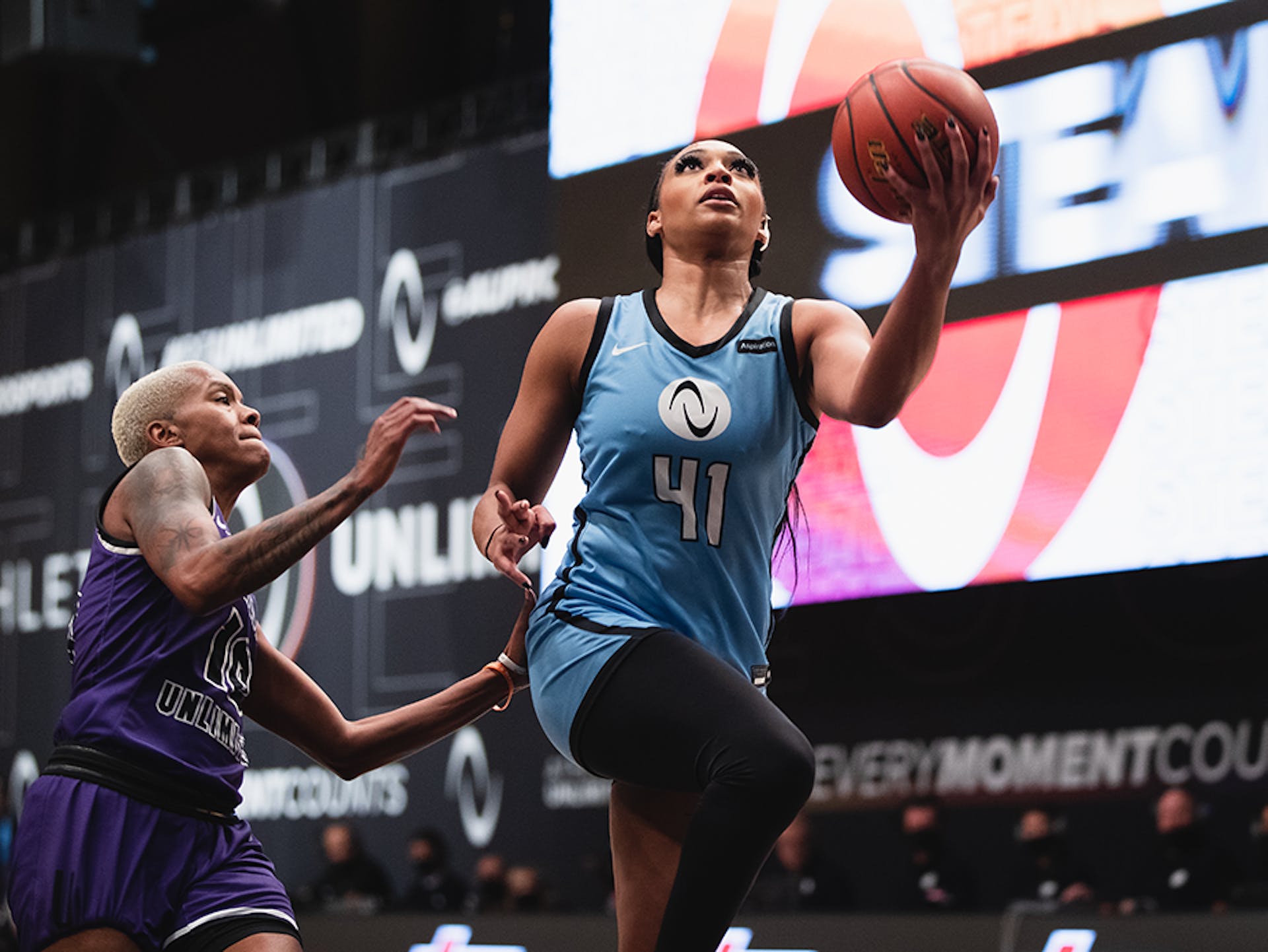 Carrington scored 28 points and grabbed 11 rebounds to lead Team Cloud to a 91-81 victory over Team Sims at Athletes Unlimited Arena. Team Cloud closed Week 4 with a 2-1 record, while Team Sims dropped to 1-2.

Though Carrington admitted she was also tired, it became a mental challenge after she and Cloud conferred pregame.

“She was very transparent with me about the fact that she needed me to pick her up, and pick up what she couldn’t bring today,” said Carrington, who registered her fourth double-double this season. “As a leader I definitely respect that she is cognizant of her own abilities day to day.

“At the end of the day she still was our leader, she still was the vocal person who was in everybody’s ear. For the physical part I had to step up and put some points up there.”

Lauren Manis notched her second double-double with 16 points and 11 rebounds and Drew Edelman chipped in with 13 points.

Team Cloud took advantage in the paint, where it dominated the rebounding battle, 50-30, and outscored Team Sims (36-22). Team Cloud also had an overwhelming advantage with second-chance points, 19-1, while holding the slight edge with fast-break points, 8-2.

“I think yesterday we just realized how good we were on the offensive boards and just showing up for each other,” said Imani McGee-Stafford, who finished with nine points and five rebounds. “We talked about how it was gonna be mental because we all were feeling it. And those things are hustle, those things are effort. We were just trying to make sure everybody left it on the floor today.”

Odyssey Sims led her team with 28 points, while Courtney Williams finished with 17 points and Nikki Greene chipped in with 10 points and nine rebounds.

“It was definitely frustrating,” said Greene, of Team Cloud’s domination with the hustle stats. “You can’t doubt their weakside help. DiJonai is definitely a good person that plays the passing lanes really, really well, so we had to be very cognizant of when it is her on the weakside. We kind of had a little bit of those slips and it kind of got frustrating on the offensive end.”

The bigger moment was what appeared to be a serious knee injury to Sims, who collided with Manis and needed assistance to leave the floor. After being tended to by trainers and working it out on the exercise bike, Sims was back on the floor in the second quarter.

Team Cloud raced out to a nine-point lead, at 37-28, as Grace Hunter and McGee-Stafford came off the bench to spark a 13-2 run to start the second period. But trailing 39-31 midway through, Team Sims flipped the script and used its own 13-2 run to snag a 44-41 lead late in the period. With time dwindling, Manis scored consecutive buckets and off back-to-back steals Air Hearn added a pair of buckets to give Team Cloud a 49-44 lead at halftime. Team Sims’ hot hand cooled dramatically, as it hit just 37.5% (6 of 16) from the floor.

Team Cloud dominated the paint in the first half, outscoring Team Sims there, 24-6, while also holding the edge in fast-break points, 6-0.

After Team Sims was able to tie the game at 60 in the third quarter, Team Cloud was able to build momentum for the home stretch by closing out the stanza on a 6-0 run. Team Cloud buried 8 of 10 from the free-throw line in the third, outscored Team Sims 17-16 in the quarter, and then won the fourth 25-21 to seal the victory.

KEY MOMENT: With the score tied at 60-all late in the third quarter, Team Cloud exploded for a 14-2 run over a four-minute span to take a 74-62 lead it did not give up. Carrington led the charge by scoring six points while Manis chipped in five points of her own.

Team Cloud’s 50 rebounds rank as the second-highest total in a game this season. … Manis has scored in double figures in four of her last six games. … Carrington, who has scored in double figures in all 12 games this season, posted her league-leading ninth 20-point effort of the season. … Williams fashioned her third double-double of the season. … Team Sims guard Laurin Mincy blocked four shots to match the league single-game high in addition to scoring nine points with three steals.