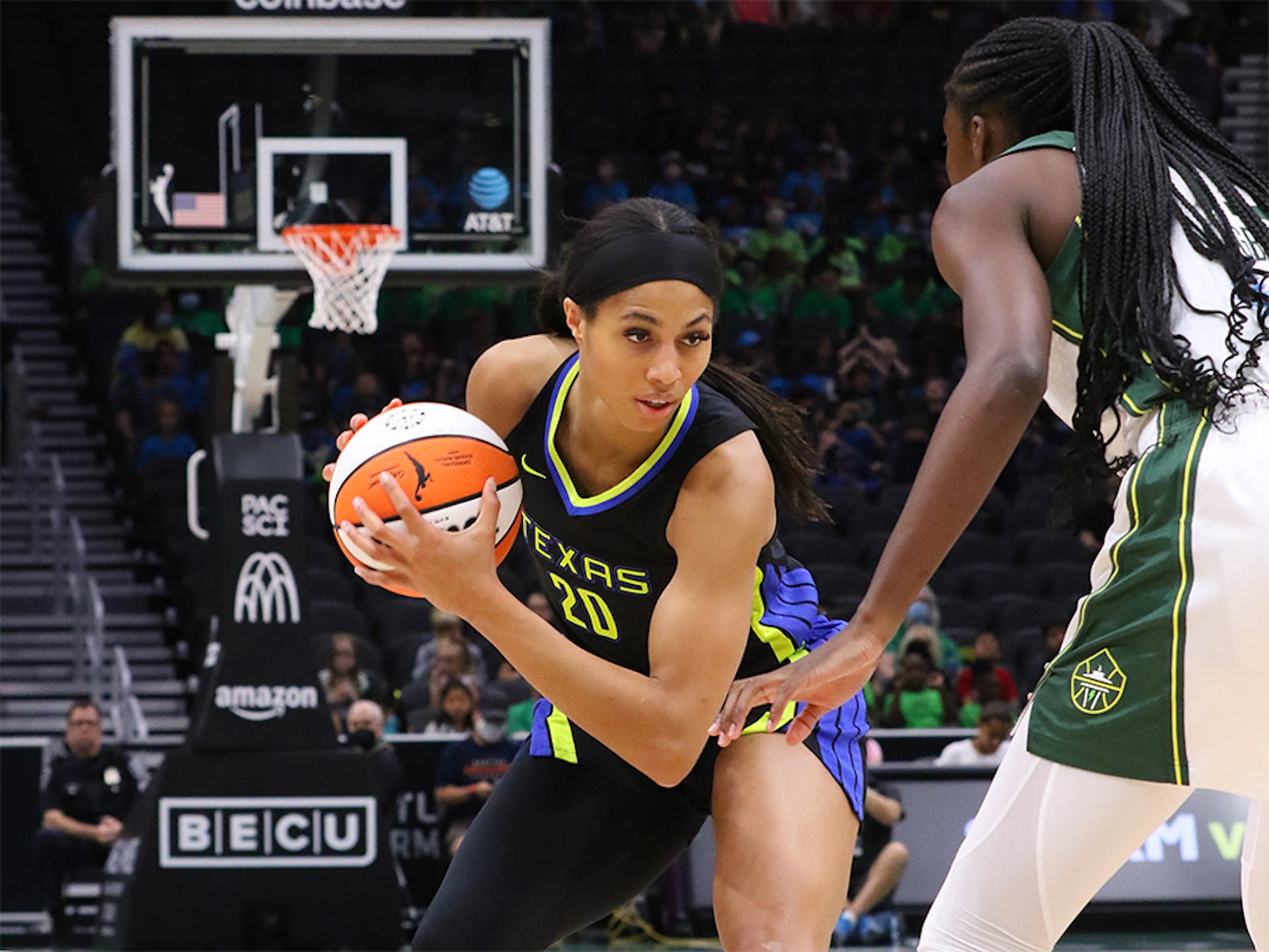 LAS VEGAS — Isabelle Harrison may be cut from a different cloth.

It’s rare her spirit can be broken. Her will is invincible.

And with an infectious personality, dazzling smile and impeccable taste in fashion, Harrison brings as close to the perfect package when it comes to representation in professional sports.

“She is a key player,” Dallas Wings coach Vicki Johnson said. “She is a starter. Unfortunately we have six or seven starters on our team. She’s coming off the bench, what she does off the bench is amazing. But she plays starter’s minutes, and she has a responsibility as a starter. Just because she’s not called in the first five, doesn’t take anything away from who she is on our team. She’s a very important piece on the offensive side and the defensive side of the ball for us.”

As quick as Harrison can charm Instagram followers with her gameday outfits, is as quick as she can break into the paint off a head fake. And don’t believe for a moment she won’t bang at the glass, as she will mix it up with an unmatched physicality when her team needs a crucial rebound.

“She works hard, she’s super athletic, her motor is crazy, so she’s just an all-around,” Las Vegas Aces veteran guard Sydney Colson said. “She can step out and shoot it. She’s a force and I think people saw that in Athletes Unlimited, and they continue to see it during the W season.”

So as Harrison and the Wings will take their homecourt in a do-or-die Game 3 battle against the Connecticut Sun – and fellow AU-alumni Courtney Williams and DiJonai Carrington – it’s hard not to appreciate the 2022 AU Defensive Player of the Year.

In what some might say has been a coming-out season for Harrison, she credited her inaugural season with Athletes Unlimited for an evolution in her game.

It was the style of play, and individuality the league creates that brought a new appreciation for the game she’s loved as a little girl.

“It changed me in the best ways,” Harrison said. “It made me uncomfortable, and it made me think about my game more than I ever have before. And I did it with great talent around me. Honestly, it was a blessing that I got to experience that before the (WNBA) season. I am a vet, but for this year I think it’s just changed my mentality.”

Harrison, who finished the season third on the AU leaderboard with 5,373 points, said every stop along the way during the WNBA season has come with rave reviews from her peers and opposing players and coaches.

What they’re seeing is someone whose confidence level has been on high since the start of the season.

“She’s a great player. Just the way she’s been playing this year, I mean it’s been great,” said Wings teammate Allisha Gray, a gold medalist in Women’s 3×3 basketball at the 2020 Summer Olympics. “She’s been big for us in a lot of games. Izzy has just been playing phenomenal. You can tell her confidence is through the roof. She’s more outspoken this season more in a leader role. She sees something, she speaks up. You can just tell Athletes Unlimited has just elevated her game.”

The leadership aspect is no surprise considering she started all 15 games during the AU season and captained four teams.

And while the numbers may not match, her presence is invaluable.

“Just watching her from afar, and then being in AU, she’s definitely developed more of an on-court vocal leadership,” said Colson, who played with Harrison in San Antonio, before the Stars moved to Las Vegas and became the Aces. “I think that comes with time for some people. It helps when you play well, because then you have that confidence and when you do the right things you have the respect from your teammates to be able to lead and have them listen.”

Off the court, one of Harrison’s best friends described her as gentle and somebody that’s easy to talk to.

Perhaps that’s why she was the recipient of May’s WNBA Cares Community Assist Award.

“You get around her, you understand, like the energy is just super soft,” Aces forward Dearica Hamby said. “I know a different side of her than a lot of people.”

A side, maybe, more people are learning about with her efforts in the Wings’ Fresh Kicks Giveaway in collaboration with national non-profit HaveASole benefiting youth at For Oak Cliff, a local nonprofit.

During the event, which provided 55 children living in a marginalized community with more than $5,500 worth of free shoes, Harrison shopped and engaged with the youth, spoke to them while providing support, inspiration and encouragement, and of course, fashion tips.

Her maturity in such situations circles back to her evolvement from the first five years of her career, to Athletes Unlimited, to what’s been a reintroduction to one of the most vibrant personalities on and off the court.

“My role this year, just a veteran presence, and bringing that knowledge and confidence and poise from the court for us I think is good,” Harrison said. “I’m not surrounded by the players I had in the AU, but I still have really great talent around me … players I know it would help them and help their game. So I’ve been happy and pleased so far what I’ve been able to do for them.”