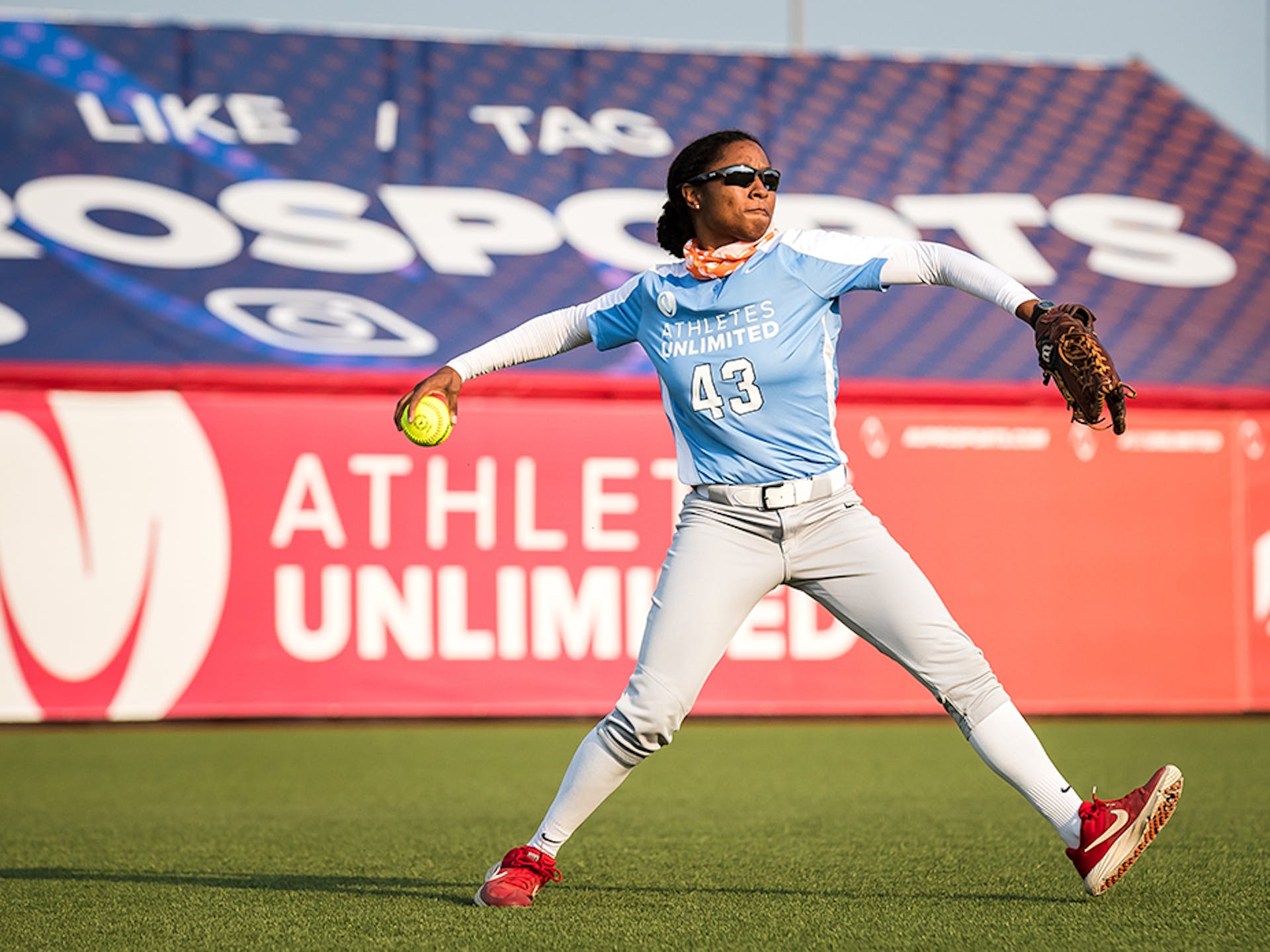 Monday afternoon was all about tight pitching and taut defense.

As temperatures cooled just a bit Monday night, the action on the softball field at Parkway Bank Sports Complex only heated up, with players running the bases with abandon – sometimes reckless abandon – and making things happen all over the diamond.

Team Purple, captained by Jazmyn Jackson, jumped out to a 4-0 lead with single runs in the first and second innings and two more in the fourth. They held on for a 4-2 victory over Team Blue and captain Michelle Moultrie.

The play was a little looser in the evening.

Kylan Becker got things going right away for Team Jackson with a walk against Kelly Barnhill. Jackson singled back to the pitcher, but when Barnhill’s throw got away at first base for a throwing error, Team Jackson had runners on second and third. After a pop-out, Jessie Warren doubled to score Becker, with Jackson being tagged out at the plate.

Becker had an RBI single in the second and Team Jackson added a pair of unearned runs in the third on another throwing error, this one by third baseman Kelsey Stewart, to grow their lead to 4-0.

Team Moultrie managed to put across single runs in the bottom of the third on Stewart’s sacrifice fly and in the fifth on a double by Caleigh Clifton that scored AJ Andrews, who opened with a triple to right-center, to cut Team Purple’s lead in half. It looked for a second like Andrews thought about heading home for an inside-the-park home run, but she held at third base.

While Team Moultrie was unable to overcome Team Jackson’s lead, the team earned 20 inning points for their efforts.

Team Jackson picked up 50 points for the win in addition to 50 innings points for 100 points overall. The individual points were well spread out among the hitters. Warren added a walk to her double to score 30 individual points and 130 overall. She was named MVP 1 of the game, notching 60 additional points for a 190 point total.

For Team Moultrie, Andrews had 40 points for her single and triple plus 20 inning points for 60 overall. Andrews was also named MVP 2, giving her 40 additional points for 100 overall. Abby Ramirez and Clifton each had 20 individual points and 20 innings points each, for 40 overall.

After both scrimmages of the day, Haylie Wagner (240), Haylie McCleney (200), Jessie Warren (190), and Samantha Show (154) sit in the top spots and will be captains for day two of scrimmages. Close behind are Amanda Sanchez (150), Aubrey Leach (150), Taylor Edwards (140), and Becker (140), who will be looking to add to their totals in hopes of gaining one of the top four spots to earn the captain title for Week 1 of competition.

But when every moment counts, it’s anybody’s game.

Up next are tomorrow’s scrimmages, featuring matchups between Team Wagner and Team McCleney in game one, and Team Warren and Team Show in game two.

In the face of adversity, Amanda Peterson brings her new appreciation for life to the court