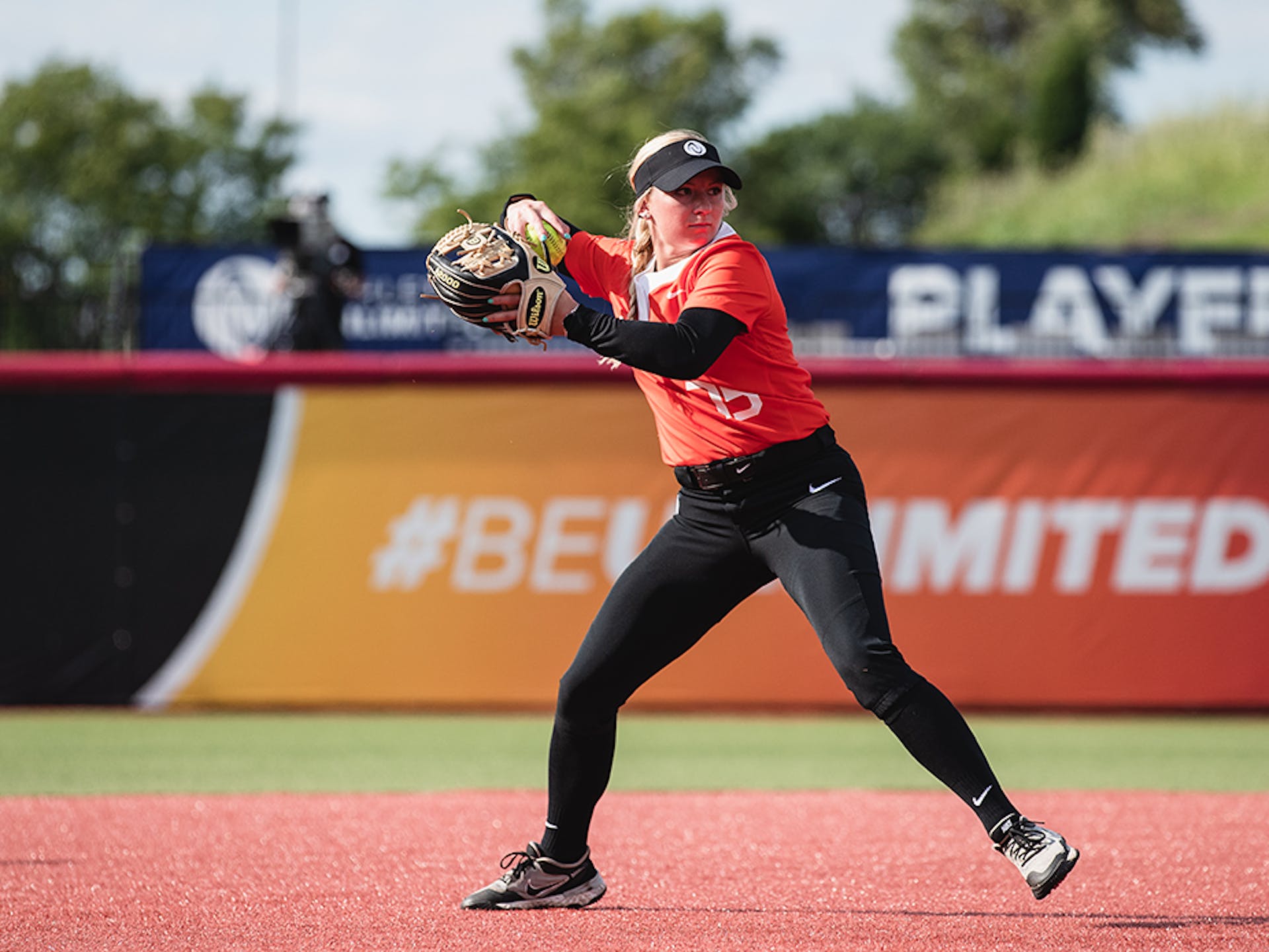 To watch Aubrey Leach on the softball field is to watch a player who looks like she’s making up for time missed.

There’s a kinetic urgency to Leach’s game, whether she’s spraying and slapping hits all over the field, running the bases with abandon or flashing leather at second base.

Leach is back with Athletes Unlimited after missing the 2021 season. But let’s not mistake time missed for time wasted, because Leach was in noble pursuit. After playing in the 2020 season and finishing 17th on the individual leaderboard, Leach stepped away from AU last year to study law at the University of Tennessee, where she starred on the softball diamond for the Volunteers.

The door was left open for Leach’s return this season, and she burst through. Entering the final weekend of the Championship season, Leach ranks 17th on the leaderboard, up three spots from last weekend. She is 13-for-35 (.371) at the plate with a .450 on-base percentage. More importantly, she’s relishing her time back on the field.

“I’m so glad to be back,” she said. “It was a really strange break. I loved supporting, but I was also kind of jealous to see everyone playing and I was in law school. The season (last year) being in the fall conflicted with the fall semester, so I just wasn’t able to be here last season. But now that they’ve moved it more into the summer, I’m here and I’m hoping they keep it that way and I can be back next year, too.

“It was so tough to watch because I wanted to be out there. Being on the GA/coaching side, it’s kind of hard to sit on that side of the fence. And then to see all my professional peers playing, too, it was itching me to be back on the field. They said I was always welcome. They’ve given me everything I could have asked for in support for my decision to go to law school. It was really nice to be welcomed back. As soon as I saw the schedule change, I shot them an email, and they were like, ‘Yes, please come.’”

The fall session of law school for Leach has begun, but she is able to Zoom classes before she has to head back to school in person. She has become an expert at balancing all she has going on in life.

“It’s been a lot,” she said. “I was really excited the first four weeks here; I didn’t have any school. It was freedom, just being able to play and get out there and grind when I needed to grind and not have any worries that I was spending too much time at one place or the other, so it was nice.”

Being a longtime student-athlete has helped Leach budget her time and juggle softball and law school.

“Definitely,” she said. “Being able to work together, being able to communicate. Time management is huge. I think I was at a great advantage already being a student-athlete having to study and play at the same time. And now, I think it’s helped me so much. I don’t have that learning curve that a lot of people do just with the demand of law school.”

Aubrey Leach is carrying on quite the heritage in diamond sports. She was coached extensively by her dad, Todd, whose own father, Lynn, played fastpitch softball. Todd’s mother, Wilma Ann Williams-Leach, was a member of the Rockford Peaches of the All-American Girls Professional Baseball League, immortalized in the movie, “A League of their Own.”

On a wall in the concourse of the Parkway Bank Sports Complex in Rosemont is a tribute to Williams-Leach. Included is a quote from her, which reads: “Those are the same stars, and that is the same moon, that look down upon your brothers and sisters, and which they see as they look up to them, though they are ever so far away from us, and each other.”

The display also includes photos of Leach and her grandmother, with a touching inscription from Aubrey: “Wilma Ann Williams-Leach was at the forefront of competitive women’s sports. She blazed a trail, excelling at multiple sports, and making a name for herself as a true athlete. As my Grandmother she has always been an influence on our family and a driving force behind our love for Softball. Without women like Wilma Ann Williams-Leach, I would not have the opportunity to compete today. We stand on her shoulders.” Leach did not get to meet her grandmother, her inspiration resonates.

“Huge,” she said. “And I don’t think I always knew it. She has definitely trickled down through our family. My dad’s side is very athletic, but he always instilled her trailblazing nature of, ‘Just go do it. If you’re passionate about it and you think this is your right direction, just go do it.’ That was kind of her m.o. She loved sports. She played volleyball in high school, but as soon as the (baseball) tryout (came), she grabbed her brother and went. That’s something that I’ve been able to take and just go, go do it. And then the passion. I think we all have her softball in our family. That comes from her.”

Leach says she has not yet watched the new series of the same name on Amazon Prime, but she has heard about her grandmother’s reaction to the movie, “A League of their Own.”

“I have always been told that she used to joke that the part in the movie where they sneak out and go dancing, and she’s like, ‘Oh we never did that.’ She had to have appreciated how much detail they did in the movie,” she said.

Carving out her own legacy

With a refreshed spirit, Aubrey Leach is enjoying life at Athletes Unlimited and its player-driven environment.

“I feel like a true professional here,” she said. “They treat us with such respect. They give us so much freedom, but I think that’s also what comes with the territory of being a professional – you’re on your own, you’re training on your own, you’ve got to know what you need and then to add in the coaching aspect from the four captains each week. I think that’s a huge step in the right direction for softball.”

Unlike two years ago, when the onset of COVID-19 kept fans away from the ballpark, this season has been a revelation for Leach, who gets to ply her trade in front of enthusiastic spectators.

“It’s been great, not only to see people inspired by us, but also to be inspired by them, coming out and their dedication to the sport,” she said. “I’ve had people from Tennessee here. It’s just wild to see how well softball travels and how important our game is to people.”

The future may hold a career in contract law for Leach so she can remain in sports – she has been shadowing sports-agent contract lawyers – but whatever that future holds, softball will be a part of it.

“I’m not ready to give it up,” she said. “The first season of not playing college ball and having to sit and wait for the pro season, I was dying because I had always been used to softball all year round. So it’s definitely been a big change. I want as much of it as I can get.

“Softball has taken me so many places I would have never gone. It’s earned me not only an undergrad education but now a law degree. I couldn’t have even seen that as a possibility when I was that 10-year-old picking up a softball.”