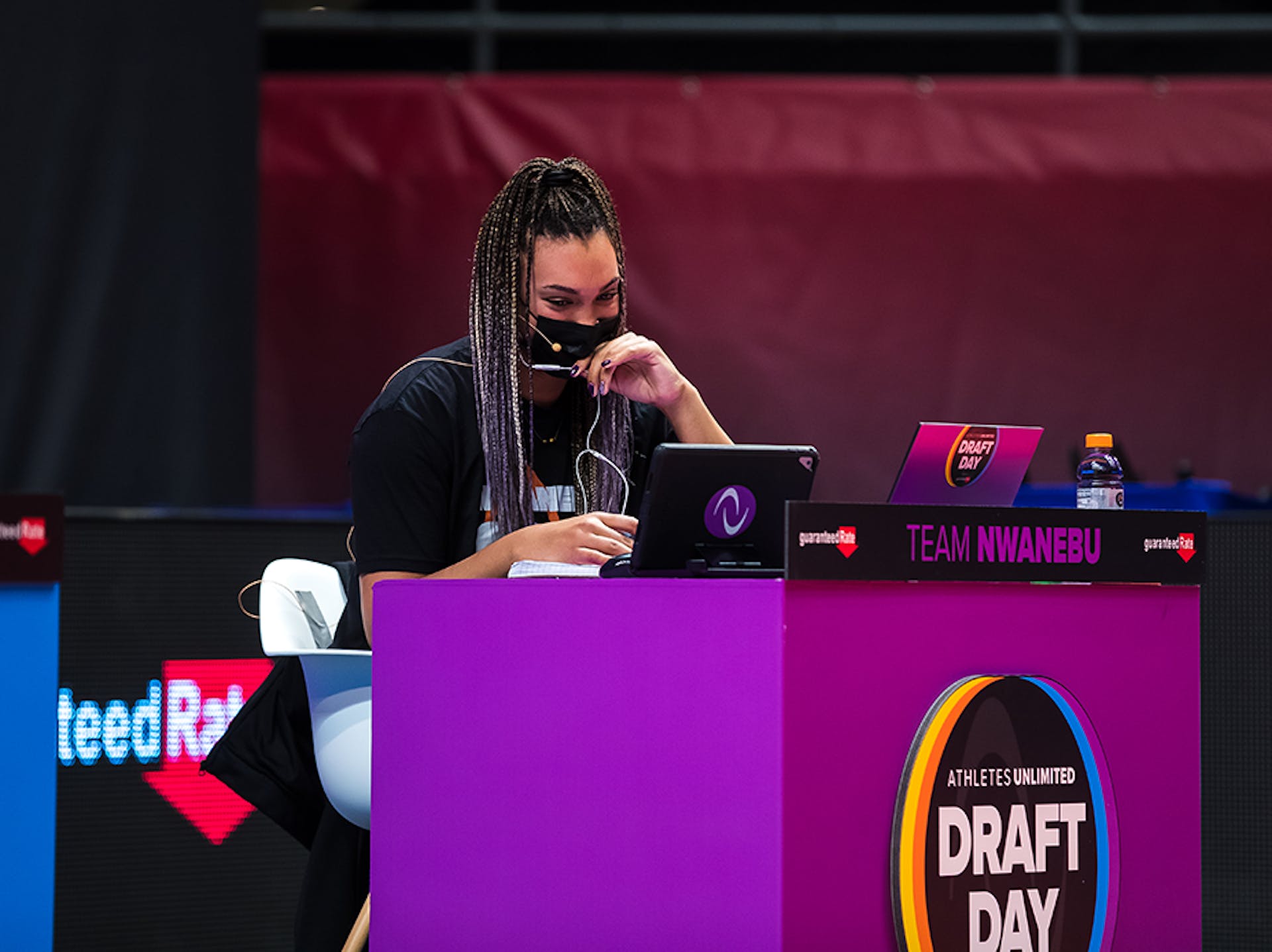 Outside hitter Jordan Larson (Gold), outside hitter Bethania de la Cruz (Orange), outside hitter Leah Edmond (Blue), and opposite Ebony Nwanebu (Purple) selected their captains for a new week of competition at the Week 3 Draft on Tuesday night. Both Larson and Edmond maintained their positions from the previous week, while De la Cruz advanced from No. 4 to No. 2 on the leaderboard.

Nwanebu was ranked 11th on the leaderboard entering last week’s draft, but was selected No. 1 overall by De la Cruz. After earning 860 points during Week 2 matches, Nwanebu got to have the first pick during this week’s draft.

Nwanebu chose outside hitter Cassidy Lichtman as her No. 1 pick. Lichtman was inactive last week, but Nwanebu and Lichtman had previously been teammates on Team Clark during Week 1.

Edmond repeated her first round pick from the second draft, choosing outside hitter Aury Cruz. Throughout the weekend, Edmond and Cruz had put up a strong defensive front, both with serve receive passes and digs. The two outside hitters also pose a strong offensive force.

De la Cruz selected the former No. 2 captain from the week before, opposite Karsta Lowe. Lowe had 53 kills over the weekend, the most of anyone in the league.

Larson’s first round pick was middle blocker Molly McCage. Once McCage dropped into the “zoom room,” the pair began to discuss who they thought the next pick should be to start off the second round, ultimately deciding on setter Brie King.

“I think that [middle and setter] connection is really important. They played together on Blue last week, and I saw that their connection seemed really good,” Larson said. “So, that for sure played into the decision.”

Setters proved to be the popular pick in the second round, with each captain taking a setter for their team.

De la Cruz picked setter Kelly Hunter for her second round pick. De la Cruz had also selected Hunter in the second round the previous week to run the offense and Hunter had 109 assists over the weekend.

In Round Four, De la Cruz selected the first libero of the draft, taking Nomaris Vélez Agosto. Vélez Agosto, who had 37 digs on the weekend, was also selected by De la Cruz last week.

In the fifth round, Larson picked long-time competitor, Sheilla Castro. Sheilla won gold with Brazil at the 2008 and 2012 Olympics, defeating Team USA in both championship matches. While not on the national team in 2008, Larson was a part of the Team USA lineup in 2012.

With her next pick, Larson took libero Kristen Tupac, her teammate from the previous week. The selection gave Larson four out of five members that are on the Volleyball Player Executive Committee.

The captains will practice with their teams for the next three days before competing in their first match with their new line ups on Saturday.

Recap: Kady Glynn rises 20 spots on the leaderboard in 8-7 win