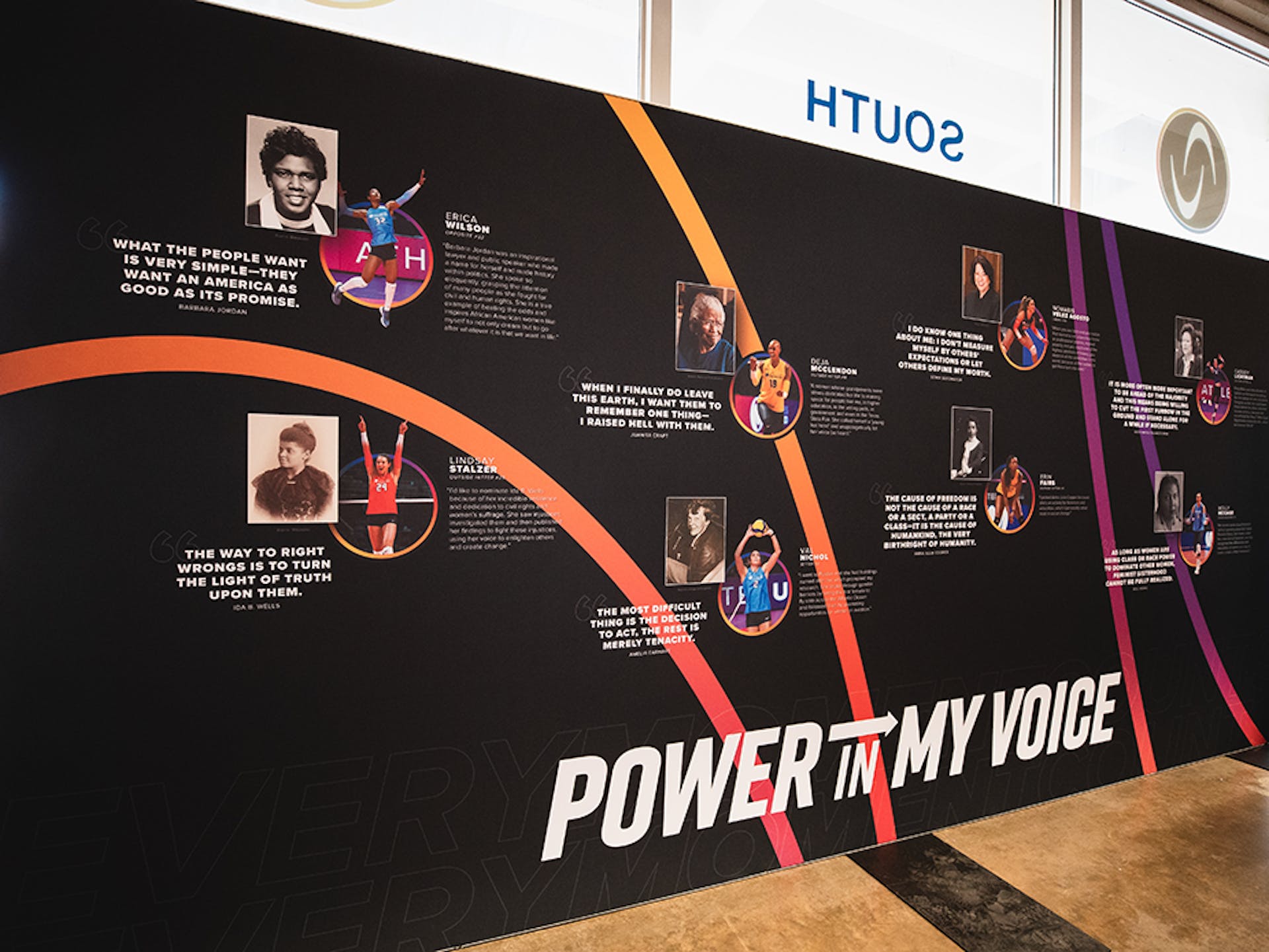 At Athletes Unlimited, honoring and supporting women doesn’t end on the court or field – it transcends through all aspects of the league, including the arena.

In honor of Women’s History Month and in the spirit of the “Power in My Voice campaign”, volleyball athletes choose eight women to highlight on a women’s wall inside of Fair Park Coliseum.

“Power in My Voice” is a year-long campaign to inspire voter participation, demonstrate that there is power in every person’s voice and encourage fans to exercise their power through their vote and other forms of civic engagement. The women chosen embody that power as civic leaders, blazed new trails and used their voices on behalf of those who have been given the least space.

Learn about the eight women and their impact on history and why they were chosen by each Athletes Unlimited player.

A staple inside of the arena this season is the women's wall. A part of @AUProSports's Power in My Voice campaign and to celebrate Women's History Month, the wall is a collection of civic leaders who inspire the athletes.

If you can't check out the wall in person here's a look! pic.twitter.com/naQxElShYQ “What the people want is very simple – they want an America as good as it’s promise.”

Nominated by Erica Wilson: “Barbara Jordan was an inspirational lawyer and public speaker who made a name for herself and made history within politics. She spoke so eloquently, grasping the attention of many people as she fought for civil and human rights. She is a true example of beating the odds and inspires African American women like myself to not only dream but to go after whatever it is that we want in life.”

Jordan earned a law degree from Boston University in 1959 and became involved in politics the following year. She helped execute a get-out-the-vote program in Houston’s 40 African-American precincts as a part of John F. Kennedy’s presidential campaign.

In 1966, she became the first African-American state senator in the U.S. in 83 years and soon thereafter was elected to Congress. As a freshman Member of the Judiciary Committee, Jordan gained national recognition because of her powerful opening remarks she delivered at the House Judiciary Committee hearings during the impeachment process against Richard Nixon. “The way to right wrongs is to turn the light of truth upon them.”

Nominated by Lindsay Stalzer: “I’d like to nominate Ida B. Wells because of her incredible resilience and dedication to civil rights and women’s suffrage. She saw injustices, investigated them and then published her findings to fight these injustices, using her voice to enlighten others and create change.”

Wells was born into slavery during the Civil War. During Reconstruction, her parents were active in politics. After losing both her parents, she cared for her siblings and provided for them as a teacher. Wells moved with her sisters to Tennessee and was involved in an incident that would spark her to begin writing about the issues of race and politics in the South. Wells filed a lawsuit against a railroad company for unfair treatment after being thrown off a first-class train despite purchasing a ticket.

She became a published journalist and the owner of two newspapers whose investigative work exposed lynching; this became a focal point of her career in activism in American and abroad. She was a founder of the National Association of Colored Women’s Club which was created to address issues dealing with civil rights and women’s suffrage. Image courtesy of Repository: Schlesinger Library on the History of Women in America.

“When I finally do leave this Earth, I want them to remember one thing – I raised hell with them.”

Nominated by Deja McClendon: “A woman whose grandparents were slaves dedicated her life to making space for people like me, in higher education, in the voting polls, in government and even in the Texas State Fair. She called herself a ‘young hot head’ and unapologetically let her voice be heard.”

Juanita Craft was born and raised in Texas who went on to have an influence in her home state on civil rights and politics. At 33 years old she joined the National Association for the Advancement of Colored People and over her 11 years of involvement, organized 182 branches of the NAACP. She was the Dallas NAACP membership chairman in 1942, Texas NAACP field organizer in 1946 and was also appointed Youth Council advisor of the Dallas branch that same year.

As Youth Council advisor, she advocated to enroll the first Black Student at North Texas State College and organized pickets and boycotts of restaurants, theaters, transposition and the State Fair of Texas.

Her involvement in community did not end there – she served two terms on the Dallas City Council and was a member of her church, theDemocratic Women’s Club, the YWCA, the League of Women Voters, and the National Council of Negro Women. “The most difficult thing is the decision to act, the rest is merely tenacity.”

Nominated by Val Nichol: “I went to Purdue and she had buildings named after her which prompted my research. She broke though gender barriers by being the first female to fly solo across the Atlantic Ocean and followed it up by promoting opportunities for women in aviation.”

Amelia Earhart is one of the world’s most celebrated aviators. She set flying records such as being the first women to fly solo above 14,000 feet, across the Atlantic Ocean and the first person ever to fly solo from Hawaii to the U.S. mainland. Her defiance of traditional gender roles started when she was young – she played basketball, took a mechanics course and briefly attended college.

She served as a Red Cross nurses aid During World War 1 and this is where her love of aviation was sparked. In 1921 she began flying lessons, purchased her first airplane, “the Canary” and passed a flight test to obtain a license.

Earhart helped to form the Ninety-Nines, an international organization for the advancement of female pilots. She was the organizations first president and the group still exists today, representing women flyers from 44 countries. Image courtesy of Collection of the Supreme Court of the United States, Steve Petteway source

“I do know one thing about me: I don’t measure myself by others’ expectations or let others define my worth”.

Nominated by Nomaris Vélez Agosto: “When you are born and you realize that normal is not a luxurious home or professional parents, instead poverty and you reach one of the highest positions in history… you deserve all the admiration in the world; because all the battles to get there turn into wars.”

She received her J.D. from Yale Law School and began her career as an assistant district attorney in Manhattan. She later worked her way up to partner of a private practice firm and gained attention for her pro bono work.

She was presidentially nominated and confirmed as the U.S. District Court judge for the Southern District of New York City and then the U.S. Second Circuit Court of Appeals.

While serving as on the federal court, she has ruled in the majority which upheld the Affordable Care Act and in Obergefell v. Hodges, to legalize same-sex marriage in all 50 states. “The cause of freedom is not the cause of a race or a sect, a party or a class-it is the cause of humankind, the very birthright of humanity.”

Nominated by Erin Fairs: “I picked Anna Julia Copper because she’s an activist for feminism & education, which I personally value most in social change.”

Born into slavery in 1859, Cooper became one of the most prominent African-American scholars in U.S. history through her teaching, writing and activism.

She became the fourth African American woman to earn a doctoral degree, which she received from the University of Paris-Sorbonne in history. Her book, A Voice From the South by a Black Woman of the South (1892) became a classic African American feminist text.

She was involved in the Black Women’s Club Movement and became a dynamic public speaker. Through her speeches and writing, she advocated for the education of women – in particular, Black women and girls. Cooper was the epitome of intersectionality before the term had ever been coined. “It is easy enough to vote right and be consistently with the majority. But it is more often more important to be ahead of the majority and this means being willing to cut the first furrow in the ground and stand alone for a while if necessary.”

Nominated by Cassidy Lichtman: “Patsy Mink overcame all kinds of barriers on the way to becoming the first woman of color elected to Congress so that she could lower those barriers for others. And that includes all of us, because she co-authored the Patsy T. Mink Equal Opportunity in Education Act, which we know as Title IX.”

A 1948 graduate of the University of Hawaii trained in chemistry and zoology, Mink, intended on becoming a doctor but was denied admission by all the medical schools she applied to.

Instead, she attended the University of Chicago Law School. No Chicago law firm would hire Mink so she returned home to Hawaii and became the first woman of Japanese-American ancestry to practice law in her home state. She went on to pursue a political career, and was elected to Hawaii’s House of Representatives and later won a seat on the Hawaii state senate. During her public service, she was committed to gender and racial equality, affordable childcare, bilingual education, and was a co-author of Title IX. She also contributed to bills the Early Childhood Education Act, the Women’s Educational Equity Act, and was first Asian-American to run for U.S. President.

Mink remained a member of Congress until her death in September 2002. “As long as women are using class or race power to dominate other women, feminist sisterhood cannot be fully realized.”

Nominated by Molly McCage: “We cannot speak about feminism without speaking about bell hooks’ Feminist theory. bell hooks called for a new form of feminism, one that recognized the differences and inequalities of women as a way to create a more unified movement. ‘As long as women are using class or race power to dominate other women, feminist sisterhood cannot be fully realized.”

bell hooks was an American scholar, writer and activist whose pseudonym was the name the name of her great-grandmother. She did this to honor female legacies and also preferred to spell it in all lowercase letters to focus attention on her message rather than herself.

Her work proposed a new definition of feminism that instead of solely focusing on the fight for equality of women and men, her theory recognizes that other social classifications such a race, gender and class are interconnected. She criticized the feminist movement’s propensity to center and privilege white women’s experiences.

hooks was the author of over 30 books, including Ain’t I a Woman: Black Women and Feminism (1981), which she wrote while still in undergrad at Stanford University.