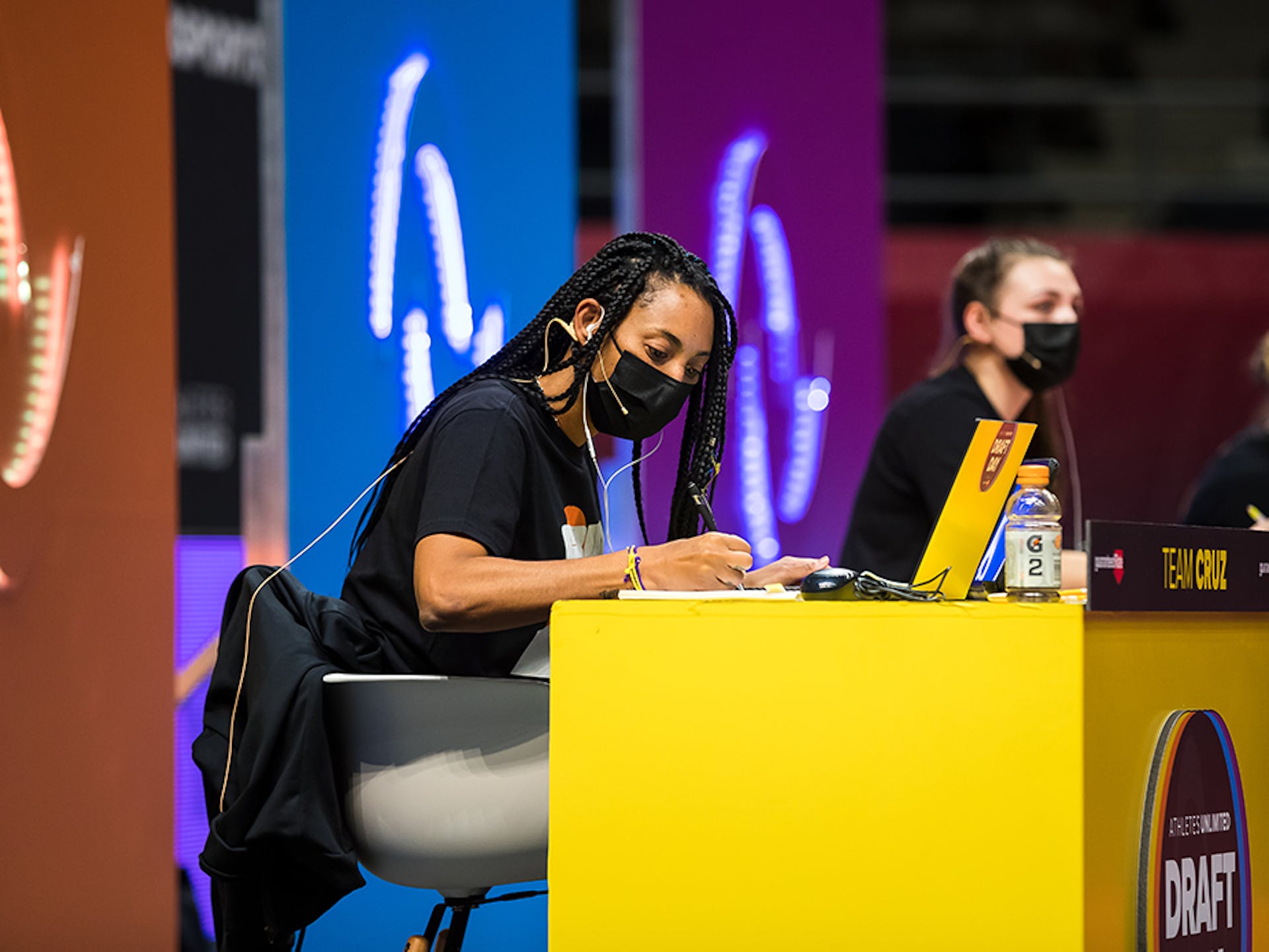 Athlete Unlimited’s inaugural volleyball season began on Tuesday night with the first official draft. The teams picked will play together for the first weekend of the season, before new teams are selected again next week.

“I met with [Larson] before the draft and told her that she’s who I’m picking,” Sybeldon said. “I then met with my coach and [Larson] helped with the strategy of it.”

Larson won a D1 NCAA championship with the University of Nebraska in 2006 and is a two-time Olympian for Team USA, winning silver in 2012 and bronze in 2016.

Larson hit .500 with 21 kills on 68 attempts in the first three scrimmages. On top of her impressive offense, Larson helped her teams defensively by getting 25 digs and 5 blocks.

For her first pick, Clark chose opposite Ebony Nwanebu. Bastianelli picked outside hitter Bethania De La Cruz, an Olympian from the Dominican Republic. De La Cruz was a first round round pick in both of the scrimmage drafts.

Cruz, who was a Team Gold captain for the two scrimmage drafts, stuck with her strategy and selected a setter as her first pick. Tonight, that setter Samantha Seliger-Swenson – a familiar pick to Cruz from Monday’s scrimmage draft.

Seliger-Swenson had 21 assists in Monday’s match, with Cruz earning six of those kills.

“As the week has been going, I’ve just been seeing and experiencing players,” Cruz said. “Yesterday, I saw how [Seliger-Swenson] was running the games, but now it’ll be totally different because we have a week to prepare.”

Cruz’s next pick was opposite Willow Johnson, the captain of Team Blue for Monday’s scrimmage and Cruz’s teammate from the first two scrimmage matches. For the scrimmages, Johnson hit .269, getting 30 kills on 78 attempts. Johnson has proved highly effective at earning kills from the back row thus far.

Cruz was allotted back-to-back picks with the new draft order for volleyball. On odd numbered rounds, the order is Purple, Blue, Orange, Gold, while Gold, Orange, Blue, and Purple is the selection order for even numbered rounds.

Sybeldon’s second pick was Karsta Lowe, another member of the USA’s national team and a 2016 Olympic bronze medalist. Lowe hit .328 on the weekend with 71 attempts and 27 kills.

Despite not picking a setter until the sixth round, Sybeldon was able to secure a solid choice with Kaylee Manns. Manns was named best setter in the Norwegian League and Philippine SuperLiga twice.

In Athletes Unlimited Volleyball, players earn points from their individual performances and their team’s wins. For each set won, a player will earn 40 points. Players will gain 60 points for a match win. Match wins are based on the total number of cumulative points from the three sets, not the number of sets won. If the teams tie on overall points, they will play a set to five to determine a winner.

The teams will have the next four days to practice together before the opening matches on Saturday night, where Team Sybeldon will take Team Bastianelli, and Team Clark will face Team Cruz.

Watch the first match on 2/27 at 5 PM/ CT across Athletes Unlimited digital platforms and the second match at 8 PM/CT on FS2. Check out the full Week 1 rosters below.