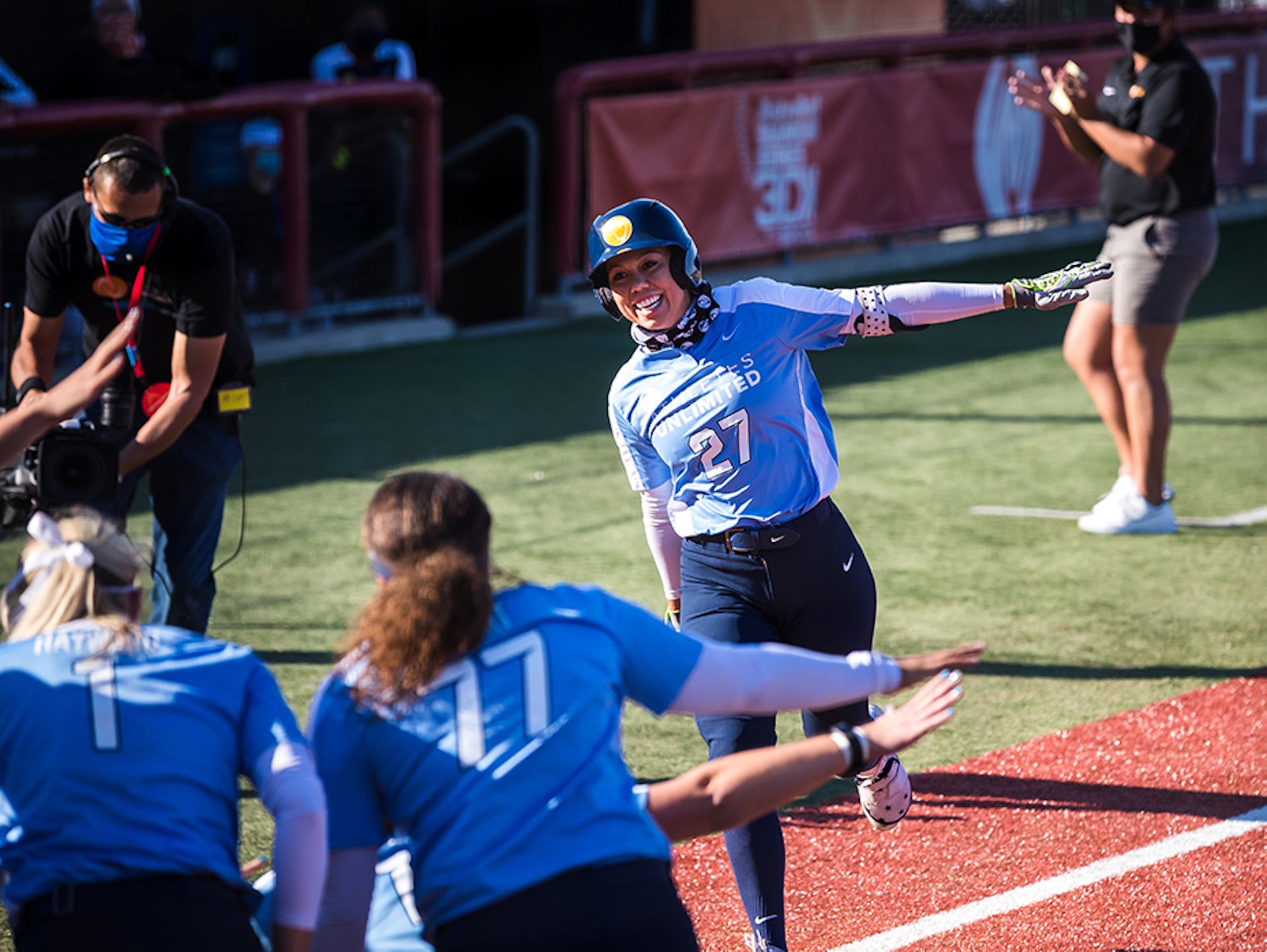 Haylie Wagner has drawn the toughest card in Athletes Unlimited Softball play so far, but on Saturday, it was Wagner who came up aces.

For a fourth time this season, Wagner went up against fellow lefty Cat Osterman as her pitching opponent. Each time out, Wagner acquitted herself well, but finally on Saturday, she came out on the winning side as Team Hayward got the best of Team Osterman 4-1 in the day’s second game at the Parkway Bank Sports Complex in Rosemont.

Team Hayward got a pair of homers from Sahvanna Jaquish, who has three homers in her last two games against Osterman.

With Saturday’s game still in doubt in the top of the seventh at 2-1, Jaquish and Haylie McCleney hit back-to-back solo homers to give Wagner a little breathing room.

Wagner worked a 1-2-3 bottom of the seventh and then waded into a sea of appreciative teammates.

“It’s definitely a great feeling, especially the fourth time around,” said Wagner, who improved to 4-4 after giving up four hits, including a first-inning RBI triple to DJ Sanders. “But she (Osterman) is a great competitor. I love competing against her, and I know when I go out there that it’s going to be a tough game, and she’s going to bring her best stuff.”

“Absolutely,” she said. “You have to no matter with anybody in this league. You have to attack ’em. You have to go after ’em. You just have to keep going for it and bring your best stuff that day.”

Wagner earned MVP 2 honors for an extra 40 points to go along with the 110 team points and 74 pitching points.

Earning MVP 1 honors was Jaquish, who took over the Athletes Unlimited overall lead in homers with six.

“I’m just being aggressive,” said Jaquish, who earned 40 points for each homer and another 10 when she was hit by a pitch. “She (Osterman) is a great competitor, like Wags was saying. So it’s a battle every time I step in the box against her. Just being aggressive and trusting myself.”

McCleney had a single and a stolen base in addition to her homer, which she hit seconds after Jaquish finished running the bases and getting mobbed by her teammates.

“Cat’s one of the best pitchers in the world so you know she’s going to try to get ahead early, especially after she gives up a home run,” McCleney said. “Just looking for something over the middle of the plate to drive. There’s a reason Cat doesn’t get a lot scored against her. We all bought in as a group as an offense of just trying to support Wags as best we could. She did her job. The offense did their job and came out with the W.”

McCleney, who earned an extra 20 points for being voted MVP 3, has played both for and against Osterman this year.

“She’s one of the most competitive people I’ve ever met,” she said. “I think that is what has gotten her to this point, all of her accomplishments. She’s a Hall of Famer in every single Hall of Fame that exists in my book. You don’t get that far without being competitive. She wants to win more than anybody. She’s fun to compete against. She’s fun to compete with. She’s a true professional in that way. The game better because of her.”

Things should be very interesting the rest of the weekend. Osterman had not been on a losing side until Saturday. Team Hayward will play Team Reed Sunday (1 p.m. ET/noon CT, ESPN2), and Team Osterman will play Team Warren (4 p.m. ET/3 CT, ESPN2).

“I love being on this team and the Blue Angels and just knowing this team has my back no matter what, and I’m going to have theirs,” Wagner said. “I love this team. It’s great.”