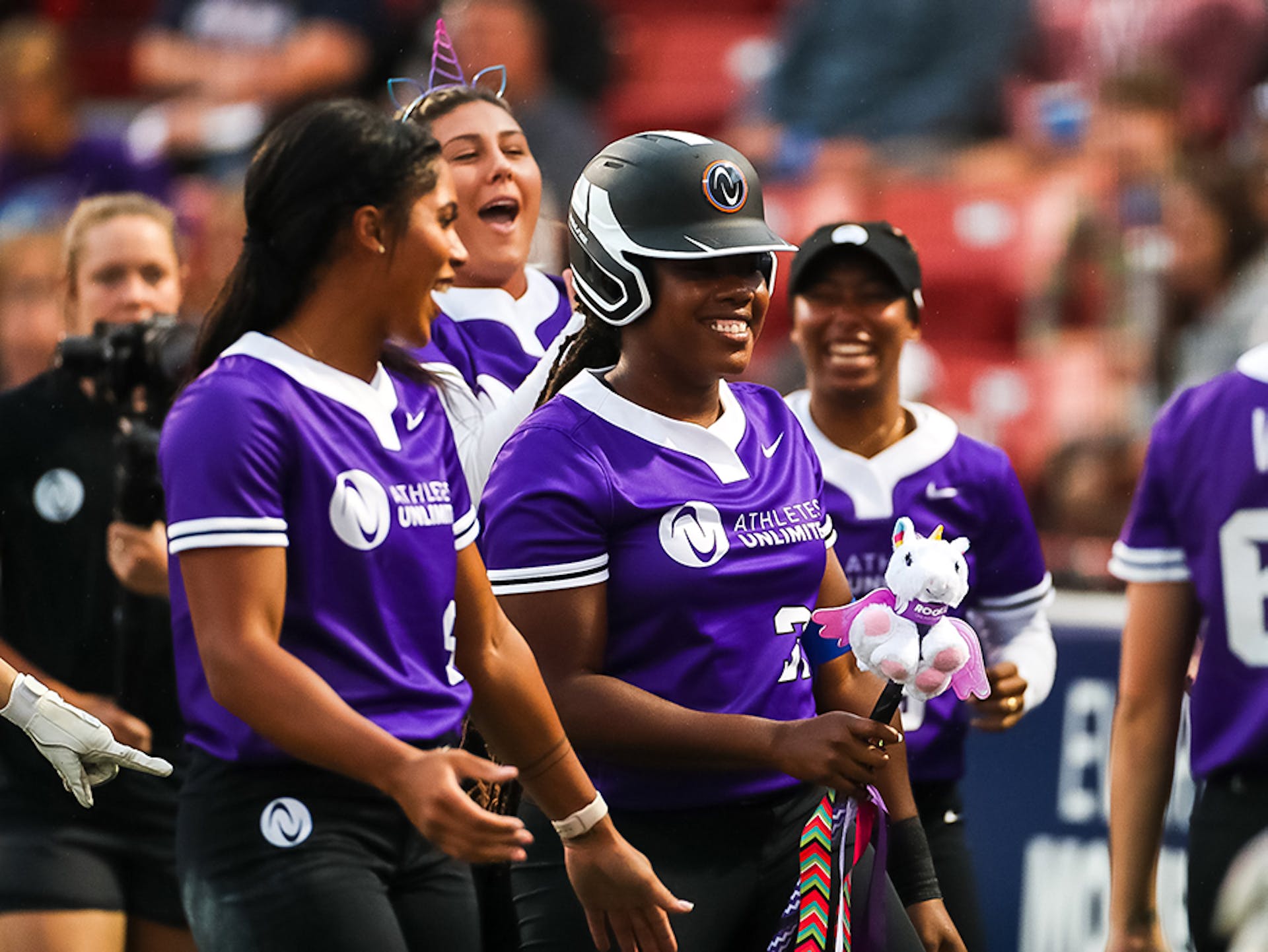 A light rain fell for much of Saturday night’s second game of Athletes Unlimited Softball.

A Purple rain, perhaps? And if Lilli Piper’s Team Purple continues to play as it did in a 4-1 victory over Team Gold, could we be looking at a Purple reign?

That all remains to be seen, but Piper’s perceptive and astute drafting appears to be paying off early in Week 2.

Ocasio walked only one and struck out five as she faced 26 batters.

It all made for a fun night for Piper’s Purple players.

“I was honored to be picked first,” said Ocasio, who improved to 2-0 this season. “Really, my goal this week was to give my team a chance and try to keep the score down for the opponent.  Lilli put together a good team. It showed tonight that we work really well together and feed off each others’ energy. We had a lot of fun, and I think that was most important in this win.”

Gold captain Sahvanna Jaquish gave her team the lead with a one-out solo homer in the top of the first inning. The homer was Jaquish’s second of the season.

But that was it, as Ocasio settled into a nice groove. For her efforts, she earned 60 extra points for being named MVP 1. Her 626 points for the season place her second overall to fellow pitcher Cat Osterman.

“I felt really good,” she said. “I just wanted to compete. I think I’m a fierce competitor. I was in the circle and did my best to keep people off base and off balance as well. I was really using my off-speed pitch and really mixing well. Gwen (catcher Svekis, Piper’s second-round pick) called a really great game, and I give a lot of credit to her and to the defense because the pitchers are nothing without their fielders.”

Team Purple powered its way to a 3-1 lead in the bottom of the second. Caleigh Clifton led off with a walk against Sara Groenewegen. DJ Sanders followed with her second home run of the season, a drive to left. Seconds later Amanda Sanchez homered to center, her first of the season.

The team has adopted a unicorn as a mascot, and the home run hitters got to take it for a ride.

“It is really fun,” said Sanders, the MVP 2. Sanchez was MVP 3. “We actually practiced just to make sure we would nail it, our little home run trot. This is a fun group for sure.”

Purple got one more in the fourth. Jazmyn Jackson doubled to right with one out. After Kelsey Harshman flied out, Ali Aguilar singled to center, scoring Jackson. Team Gold got good relief from Amber Fiser and Odicci Alexander, each of whom tossed scoreless ball after Groenewegen went 3.2 innings.

This is Aguilar’s first season in Athletes Unlimited, so she is getting used to the changing weekly dynamic of being on a different team.

“Yeah, I think it’s always different, depending on the different types of players you have together,” she said. “I feel like this team obviously has a lot of fun. We’ve all bought into our team name, if you can’t tell. Yeah, it’s just a lot of fun. Each week is getting better.”

And pretty soon, this team may have people believing unicorns are real.