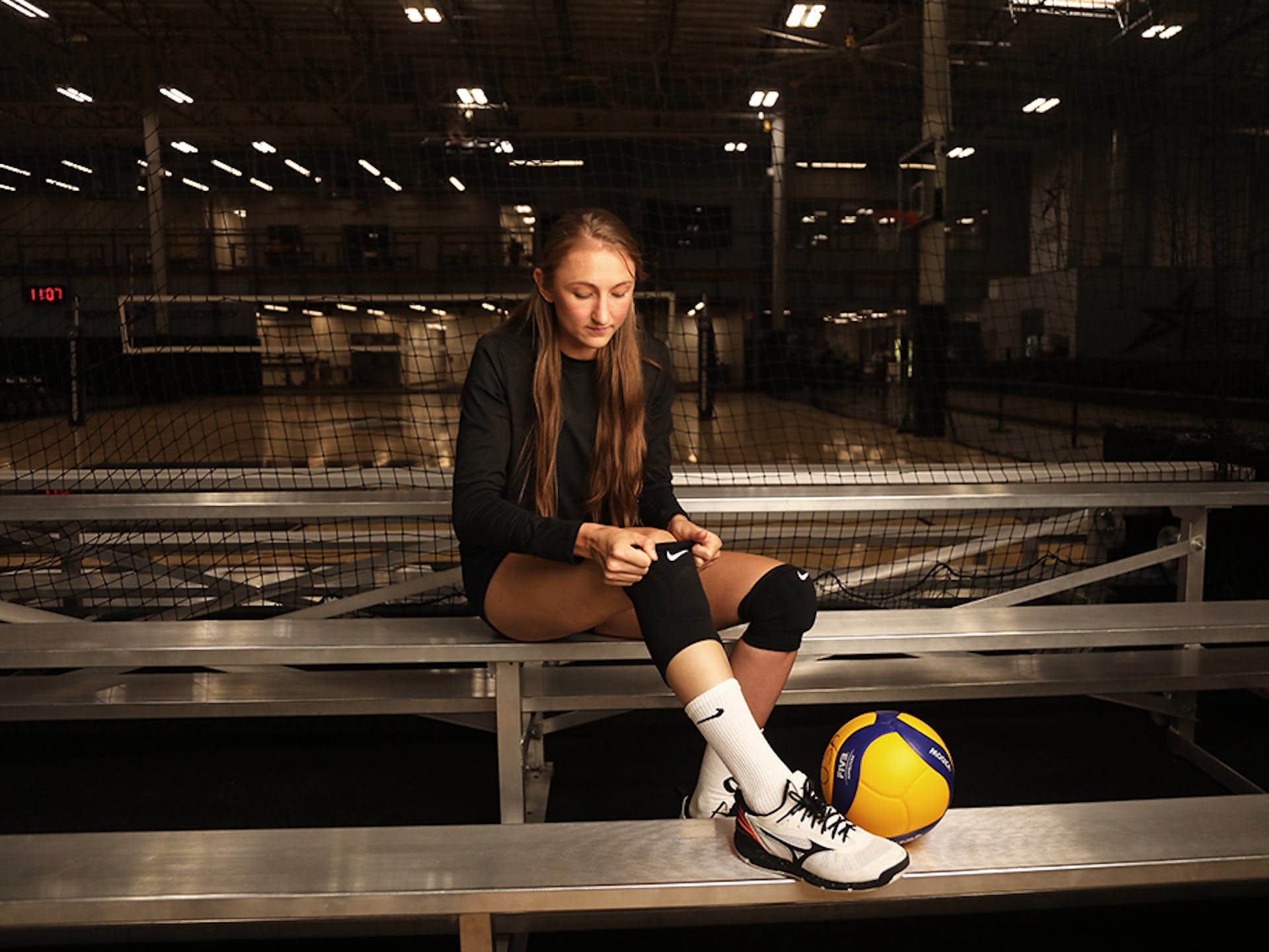 The scoring system of any sport does a lot of heavy lifting when it comes to how the sport is played and experienced. It provides a framework and definition for what athletes and coaches determine as success. In the case of volleyball, striking the ball into the other team’s court counts as a point; earning enough points is worth a set; and winning enough sets equals a match victory. This fundamentally guides how athletes, coaches, and fans think about volleyball.

Imagine if a volleyball player was only allowed to take a certain number of steps to execute a skill, like how a basketball player can only take one step after they stop dribbling. This would significantly change how athletes and coaches would strategize and train, all because of a minor adjustment to the scoring system.

Fortunately, we don’t have a rule like that in volleyball, so players are free to run exactly where they need to go to win a rally. But simply measuring team victories in terms of sets ignores a lot of exciting events that take place in a match, particularly if those exciting events are performed by the losing team. Athletes Unlimited captures what is normally lost in a match by assigning value to these events, so that every moment counts towards the final outcome. By balancing team, individual, and MVP points, individual athletes can paint a fuller picture of their skill and prowess over the course of a season.

But…how exactly do we balance these categories? Weigh team points too lightly, and individual players may get fed up with working together and start acting out of self-interest. Weigh MVP points too heavily, and athletes may be motivated to strategize and collectively reward or punish a player for personal or competitive reasons. The scoring system plays a huge role in encouraging certain types of behavior and discouraging others, so what statistical choices can we make to prioritize teamwork while still rewarding individual performance?

Thankfully, Athletes Unlimited didn’t have to start from scratch. When the softball scoring system was first built, all that we had to go on were some simulations of historical data and a dash of gut instinct. Now, with a full season’s worth of data under our belt, we could observe actual trends that took place for each of the league’s 57 athletes. 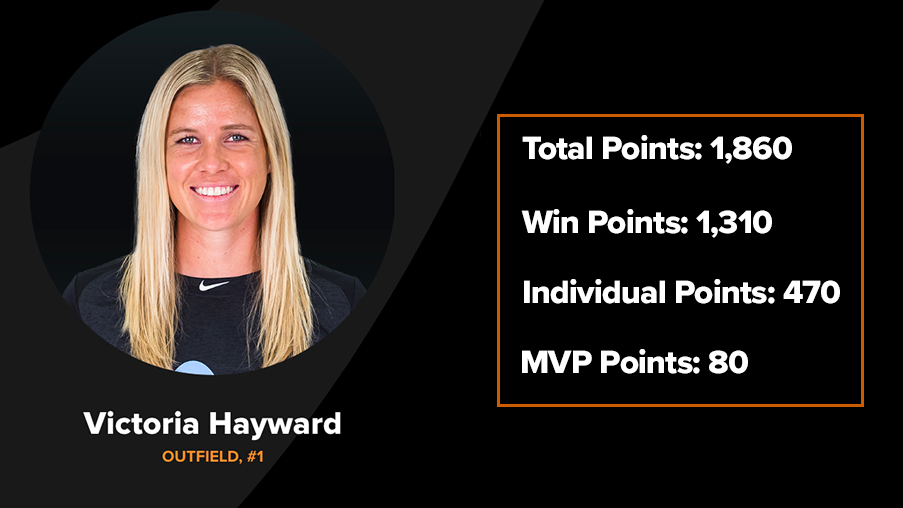 You’ll notice that Hayward’s win points make up about 70% of her total score, with individual points hovering around 25% and MVP points at 5%. If you repeat this exercise for all 57 athletes, you’ll see that this balance remains consistent in aggregate: the average player could expect to have a composite score that looks like Hayward’s.

This 70:25:5 ratio is a good place to start, as it achieves the goals of the scoring system that motivate the competitive behaviors we’re looking for. However, softball and volleyball are different sports, and the path towards victory looks different for individual players. While softball athletes do have to work together to win games, certain athletes can set themselves apart quite a bit from their teammates, particularly strong pitchers and hitters. Keeping the weight of win points high makes it less likely for these athletes to act in their own self-interest.

In volleyball, the success of a rally is more dependent on the collaboration of multiple teammates. An outside hitter who’s delivering kill after kill is probably going to finish the match with more individual points and a stronger chance at an MVP spot, but that outside hitter is still reliant on a good dig and pass from their teammates to make the kill. While an athlete could still try to act in their own self-interest — a server could choose to be aggressive in their serves to try and win aces, at a higher risk of serving errors — it’s less likely due to the inherent nature of the sport. We can probably adjust the ratio to 65% for win points, 30% for individual points, and 5% for MVP points and still keep things equitable for all players.

Now that we know the ratio we want to achieve, how can we go about determining the point values for each of the three categories?

As a reminder, here is the breakdown of the individual points: Finally, we need to determine how to divy up the 180 points across each set, as well as how much should be available for winning the match. First, we know that the winner of the match should walk away with more points than the loser. Second, we know that the winner of the match needs to win at least one set in order to win the match. Therefore, (match win + set win) > (set win + set win). However, we can’t weigh the match victory so heavily that a team who has been behind for the first two sets, then sweeps the third set and ultimately the victory, dominates over the other hardworking team who showed more consistency across the match.

With these assumptions in mind, we conducted simulations using different breakdowns of win points and cross-referenced them with common sense reactions from volleyball experts to yield the final result: 40 points for a set win, and 60 points for the overall match victory. This satisfies the equation we laid out earlier and is the most appropriate distribution of points given the potential outcomes of a match. Two very closely matched teams can finish the match with only a 20 point difference (80 vs. 100), but a team that is clearly more superior will still walk away with a majority of points (140, or even 180 points). Check out this post to see this play out across three hypothetical matches.

MVP points are a fascinating method of introducing the athlete perspective into scoring outcomes. Unlike other models, it provides athletes with the opportunity to weigh in on how well they think their teammates did and directly reward their teammates (or even their competitors) for superior performance at the highest level of the sport.

At the same time, MVP points can’t be weighted so heavily that players will be motivated to manipulate the vote in their own self-interest; we want to avoid athletes ganging up on certain players to overly reward or punish them for how well they’re doing on the leaderboard. Keeping MVP points at 5% of the total pie is an appropriate percentage to promote this opportunity to players while not giving too much power to them.

MVP points were folded into our data simulations last, once the balance of team and individual points had been figured out. Luckily, awarding 60 points to the first place athlete, 40 points to second place, and 20 points to third place achieved this 5% balance. It also has the added benefit of continuity from the softball season, where existing fans of Athletes Unlimited will already be familiar with this aspect of the system.

The Athletes Unlimited scoring model is unique in how it assigns value across three categories of performance: team, individual, and MVP. Unlike most traditional sports, which only places value on a team’s victory and shunts isolated events into a statistics tracker relevant to only the most dedicated fans, Athletes Unlimited makes every moment count by factoring each moment’s value into a match’s outcome in real time. A well-designed scoring system should not only make this intuitive to athletes and fans, it should also motivate the appropriate competitive behaviors to keep the sport interesting to play and to watch.

Therefore, striking the right balance between these three categories is essential to the proper functioning of the scoring system. Encouraging teamwork and collective effort has always been a priority for Athletes Unlimited. At the same time, we want to acknowledge the talent, skill, and execution of the players, as well as let the players acknowledge those factors in each other. By weighting these objectives statistically within the context of the scoring system, we can manifest these objectives into the volleyball that we know and love.

In the face of adversity, Amanda Peterson brings her new appreciation for life to the court