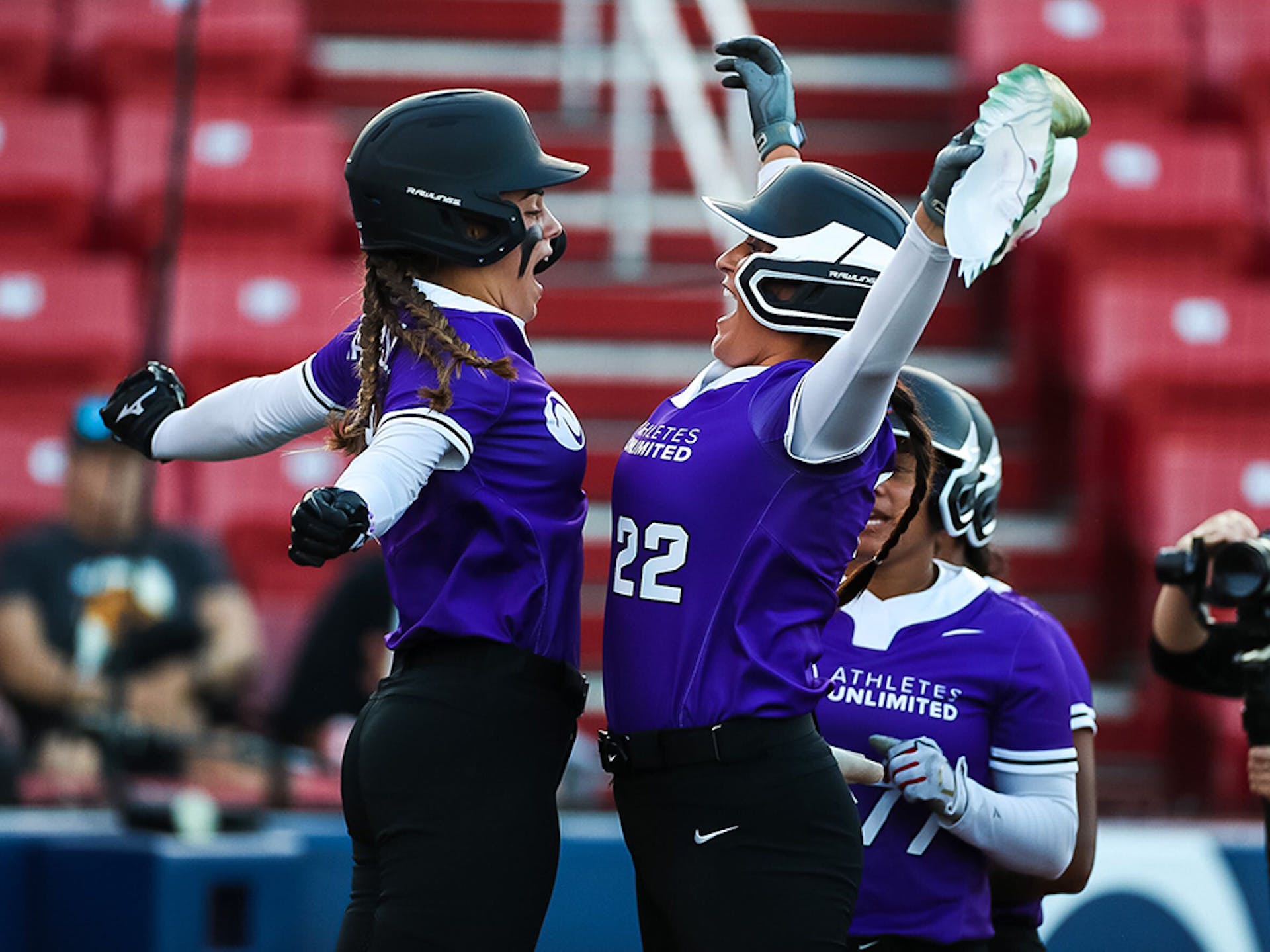 Sanchez, who turned 25, wasted no time getting the party started in a 5-0 victory for Team Ocasio (Purple) over Team Osterman (Blue) in the first game of Monday night’s doubleheader.

She hit a three-run homer in the top of the first inning, and Team Ocasio swept all 70 innings points as well as getting 50 for the victory.

“It was awesome, but I think the best part was the team win,” Sanchez said. “That was my birthday wish today, so I’m glad I could make it come true.”

In addition to making here presence felt at the plate, Sanchez got some nice presents and birthday wishes, as well.

“Yeah, I got a lot from my teammates,” she said. “My captain (Aleshia Ocasio) got me a little cookie cake. I celebrated with my team. It was awesome. It was also awesome to have my mom and my brother in the stands.”

Sanchez got the birthday celebration started with a Roman candle of a blast in the top of the first inning.

Kelsey Stewart doubled with one out, and Erika Piancastelli was hit by a pitch from Taylor McQuillin. One out later, Sanchez hit a high drive to center field for a three-run homer.

Blue captain Cat Osterman replaced McQuillin in the third after McQuillin walked Piancastelli to open the inning. Gwen Svekis doubled Piancastelli to third base. Osterman looked like she might get out of it as she retired the next two batters, but Lilli Piper hit a double to drive home two runs.

“Cat is Cat,” Piper said. “When she comes in, everyone starts to worry, and you try to bring your best swings on a good pitcher. But I think it was just important to tack on as much as we could and give our pitchers a comfortable lead just so they could do their thing on the mound and not worry about anything else.”

In the circle, Ocasio was sharp. She improved to 4-4 by pitching five innings and giving up three hits while walking just one and striking out five.

“I felt really good,” she said. “The biggest thing was to give my team a chance coming off a loss two days ago. I wanted to make sure today that I gave my team a chance. I knew I wanted to go short for five and have someone come in for relief. We stuck with the plan. Odicci (Alexander) came in to close, and we threw a combined shutout, so we did our job.”

On defense, Team Ocasio got nice catches from all three outfielders: Amanda Lorenz in left, Janie Reed in center and Jazmyn Jackson in right. Catcher Gwen Svekis also threw out a runner trying to steal.

“Oh, my God, defenders make a pitcher,” Ocasio said. “I wouldn’t be a pitcher without my defenders. All three of them made plays. Jaz out there, I thought that ball (by Riley Sartain-Vaughan) was over, but she just completely stuck a glove up and robbed it off the fence. Janie and Amanda with web gems, that was really cool to see. They had my back, and that’s all I could ask for.”

Osterman did a nice job in relief, finishing for her team with five innings of four-hit, one-run ball. McQuillin fell to 3-2 after she worked two innings and allowed three hits and four runs.

Sanchez was the game’s MVP 1, good for 60 bonus points, followed by Piper (40) and Ocasio (20). Entering Monday’s second game, Ocasio found herself atop the overall points leaderboard with 1558.

“I don’t necessarily think about it too much,” Ocasio said. “When people try to talk to me (about it), I kind of stop them in their tracks. It is about the team. On the leaderboard, in the top four, you have to draft your team as you see fit, what you want in your lineup. It is all about the team because even being a captain, you don’t win without your team.”