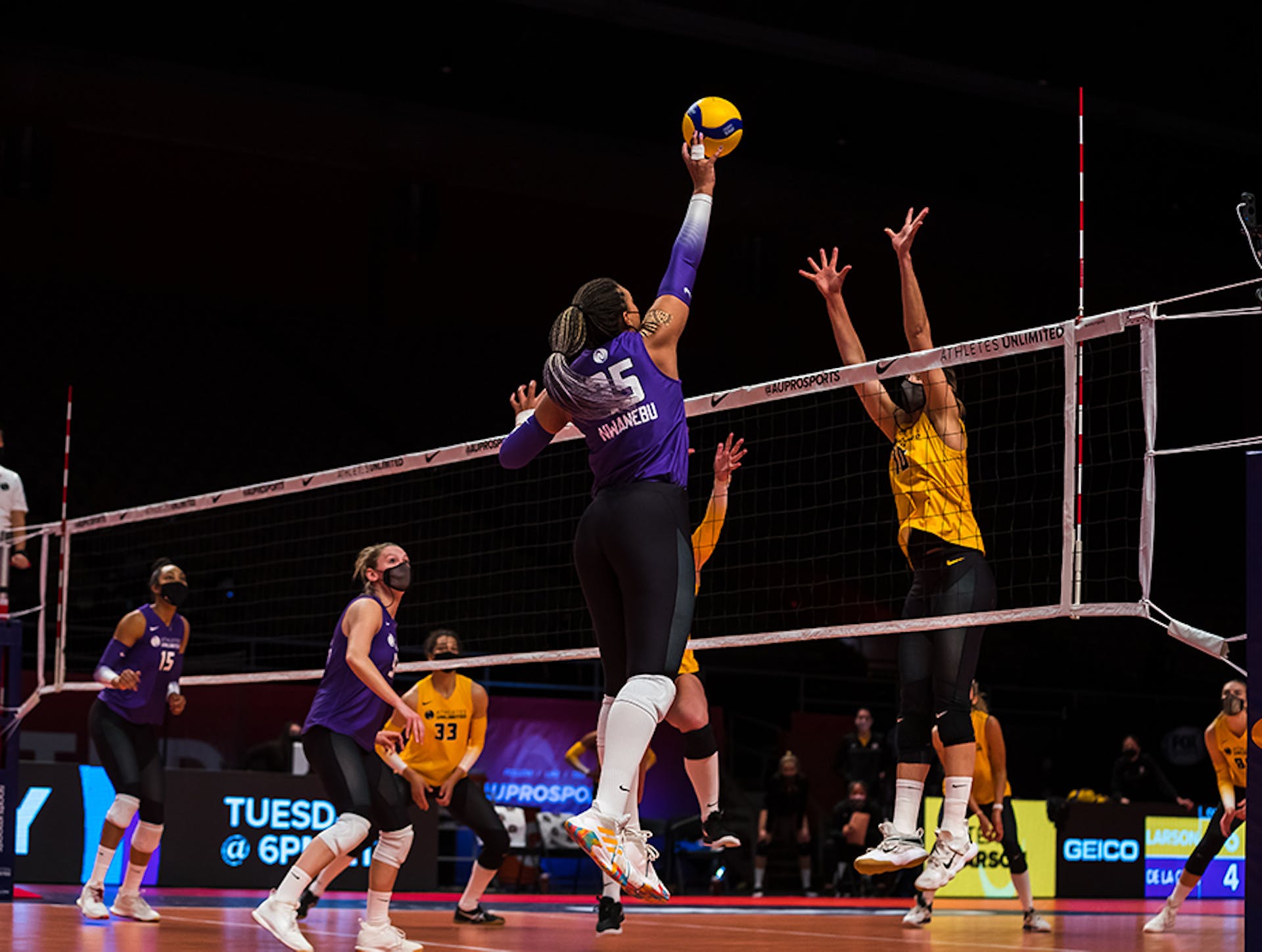 Team De la Cruz came out in full force on Monday night against Team Larson, winning the overall match 73-57, but only winning two out of three games, dropping a close third set.

Four service errors and no aces from Team De la Cruz proved to be a momentum killer and a major contributor to Team Larson’s point total.

Yet, what the team lacked in serving, they made up for in blocks, obtaining six by the end of the first set.

In Set 2, Team De la Cruz emerged with a strong start again and minimized their service errors allowing them to win by an even larger margin at 25-14.

A momentum swinging moment occurred at 6-10 as Nwanebu chased down a pass, fell on her back, and managed to pop the ball in the air with one hand. Hunter tipped the ball over, getting Team Larson out of system. Team Larson recovered, but was unable to send a difficult ball back over, which allowed for Team De la Cruz to easily set up their offense, finishing the play with a kill. Another kill from De la Cruz on the following point forced Larson to call a timeout at 6-12. From there, Team De la Cruz maintained and built on their lead.

Although Team De la Cruz had won the overall match when they’d scored just their eighth point in the third set, the set itself proved to be much closer throughout. It was a battle to claim the 40 points attached to it until the very end.

Team Larson made line-up changes entering the final set in an attempt to mix up their energy on the court. Outside hitter Holly Toliver contributed three kills while opposite Alex Holston had four.

The changes, along with limited errors, put Team Larson in a better position towards the end of the set. A block from Lianna Sybeldon against De la Cruz put Team Larson at match point, followed by an ace from Larson, to win the set 25-23.
With the set win, each member on Larson’s team took 40 win points, while everyone on Team De la Cruz earned 140.

De la Cruz had an incredible offensive performance with 15 kills on 31 attempts for a .420 attack percentage and two service aces. Defensively, she had five digs and one block. The team captain was voted MVP 1 and earned 360 total points, 60 of which came from the MVP vote.

For the first two sets, Larson averaged a .088 attack percentage, but in the third set she improved her percentage to .200 with four kills and only one error. Larson had an impressive defensive match with 11 digs and was voted MVP 2 for 40 points that contributed to her 163 total.

McClendon vastly improved her hitting performance from Saturday night, where she had no kills, to earning nine kills against Team Larson. She earned three blocks during the match for 36 stat points and was voted MVP 3 for another 20, putting her at 248 overall.

For the weekend, Team De la Cruz won all three matches and went 6-3 in sets.

“There was great overall strategy coming into play,” De la Cruz said. “The biggest was communication. Every player did that. Every player did their job as best they could and they played well to do what they needed to do, to get this team in the status that we are.”

Larson secured her spot as Gold Team captain for the second consecutive week atop the leaderboard with 1,828 points. De la Cruz climbed up to the No. 2 spot with 1,670 points and will captain Team Orange, while Leah Edmond remains the captain of the Blue Team with 1,466 points. Nwanebu surpassed Karsta Lowe on the leaderboard with 1,463 points for the final captain position with Team Purple.

Gano steps into box with different mindset for Season 3