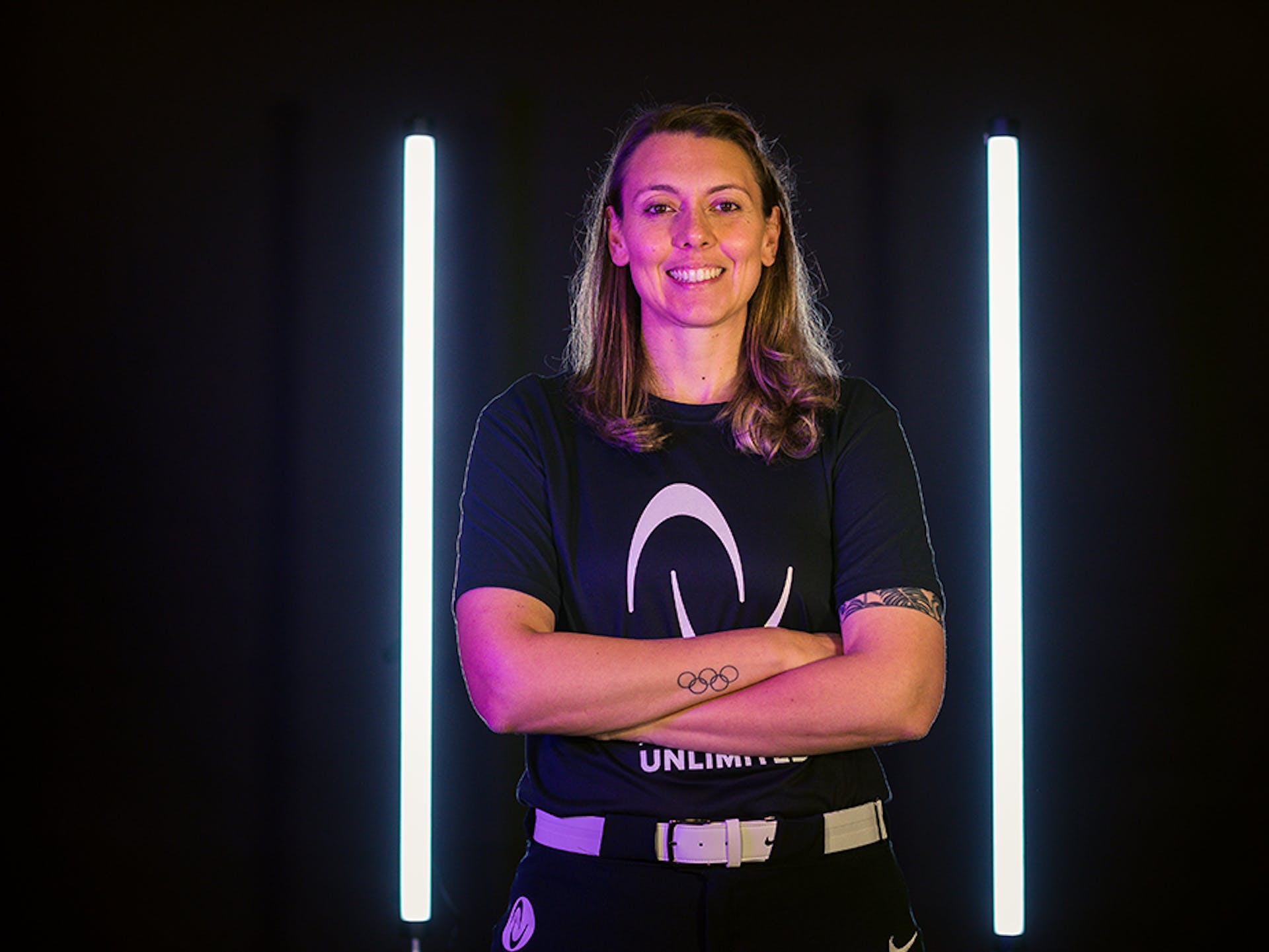 Athletes Unlimited is next stop for Italian pitcher Greta Cecchetti

If you check the arrivals board at O’Hare International Airport in Chicago, you may see that Greta Cecchetti’s ETA to Athletes Unlimited is set for late July – after a delay of a year.

The wait should be worth it.

Athletes Unlimited is getting a world-class pitcher who helped put Team Italy on the map in world softball.

And the 33-year-old Cecchetti will get a chance to play with and against the top professional softball players in the world.

Cecchetti has plied her trade around the world. That includes a recent stay in Japan, where she pitched for SGH Galaxy Stars. Athletes Unlimited will be her latest stop in a softball journey that began in her hometown of Bollate, Italy. That’s just one reason for the excitement.

“I could think of a million reasons,” she said about playing for Athletes Unlimited. “Just the chance to be part of such a big event and everything they stand for. It’s not just the softball. It’s playing for a cause and giving women’s softball and women’s sports visibility in everything they do. It’s just great for the sport and being part of that and just being part of a pool of 60 athletes who are the best softball athletes in the world. It doesn’t get any better than that.”

It’s been a whirlwind past year for Cecchetti. She pitched for Team Italy in the Tokyo Olympics last summer, putting up an ERA of 3.44 in 18.1 innings pitched. She was set to join Athletes Unlimited for its second season in Rosemont, but she was unable to obtain a visa in time.

“Because of COVID, they cut down a lot of visa appointments,” she said. “I couldn’t get my appointment in time. I couldn’t come weeks late because it’s (the AU season) only five weeks. Unfortunately it didn’t work out. But I’m good with the visa now.”

It’s not just the softball. It’s playing for a cause and giving women’s softball and women’s sports visibility in everything they do.
Greta Cecchetti,
On playing with Athletes Unlimited

Cecchetti’s softball journey began in her home country of Italy, which is gaining a foothold in both softball and baseball. Like many athletes who eventually find their sport, it took some trial and error for Cecchetti before she fell in love with softball.

“When I was little I tried different sports,” she said. “I am very tall (6 feet), and I was very tall growing up – and very uncoordinated. I wasn’t good at anything, let’s just say that. Let’s be honest. My aunties played softball, and they represented Italy, as well. So they said, ‘Why don’t you try it. It’s fun. It’s a sport that allows different body types, and you can definitely grow and improve with that.’

Cecchetti kept refining her softball skills, and while attending the Italian Softball Academy in Tirrenia, she caught the eye of U.S. softball and coaching legends Jay Miller and Susie Parra, who helped her create a profile, which led to her coming to the States to study and play softball at Polk State College in Florida before she headed to Texas A&M-Corpus Christi.

“During high school, they opened this baseball and softball academy that was financed by MLB,” Cecchetti said. “It was mainly a way for MLB to find prospects for the minor leagues. The federation decided to put some funds for softball into that, too. As soon as I heard that, I signed up and did a tryout. That year they selected only six softball players. That meant I had to move away from home for my last years of high school. The academy was in Tuscany. That’s about a five-hour train ride from home.

“That’s kind of what made me think about college because I was already away from home, going to school in the morning, practicing every day. It kind of resembled what college is like. I knew a couple of baseball guys who were looking into that. They got me to start thinking about, ‘Oh, I love softball. I want to keep studying, but I don’t really want to do it in Italy, and I know softball is great in the U.S.A., so let’s look into that.’”

There was a period of adjustment at Polk for Cecchetti, who was learning a new language and adapting to a new culture.

“Yes, it was tough at the beginning,” she said. “My English was not good. That’s one of the main reasons I picked a junior college, because of smaller classes and getting to know the teachers. And they also offer those intro to college classes where they could help me with English.

“My college coach, Jeff Ellis, used to say, ‘The first two months, she didn’t open her mouth. I didn’t know what her voice was like.’ It was pretty accurate. You’re thrown into it. Nobody speaks Italian. You’ve got to learn fast. I had to adjust to that very quickly. Even just learning about the school system and how it works with credits and GPA, everything is completely different. I had to learn that quickly and adjust quickly.”

The pinnacle of Cecchetti’s career – to date – came last summer when she marched out with her Italian teammates to take part in the Olympic Games. Team Italy didn’t win a game, but they proved they belonged on the world stage.

“It’s hard to describe it,” Cecchetti said. “It was absolutely amazing. Being in the village, being surrounded by so many great athletes and not just with softball, but any sport in the world, I’ve dreamed about this since I was a little kid. So finally just getting there and getting that feeling of everything I’ve worked for so far, now I can say that it’s worth it.”

The Games were bittersweet for Team Italy, which lost its coach and longtime softball sage Enrico Obletter to complications from COVID-19 in February of 2021.

“It was a really tough journey for us,” Cecchetti said. “We lost our head coach to COVID. So that was really tough, and adjusting to the new coaching staff and all of that. We didn’t win any games. We got pretty close. We played some good ballgames. But the overall experience for me was great. It’s something that I will remember in a positive way for the rest of my life. Looking at it now, that’s what allowed me to be here right now.

“(Obletter was) such a big influence. He was the first person to believe in us when we didn’t believe in ourselves, when nobody believed in us. His passion, his energy, he just gave all of that to us. He got us to the point where we went from being no one to being a team that is top six teams in the whole world. And that only happened in three or four years. That says it all.”

Cecchetti wasn’t the only AU player to take part in the Olympics for Team Italy. Catcher Erika Piancastelli, who will begin her third season with AU, was in Tokyo with Cecchetti, and recently played with her in the Japan Diamond League. Piancastelli was asked what fans of AU softball can expect from Cecchetti.

“The fans can expect to see a lot of passion and a lot of smiles from Greta,” she said. “She loves the game, and I’m so excited for her to be able to finally experience the AU atmosphere.”

Of course, Cecchetti and Piancastelli can make history this season together as the first all-Italian battery in Athletes Unlimited. With teams changing every week, there figures to be several chances for Piancastelli trying to get a hit off Cecchetti, who will be trying to strike out her Team Italy mate.

Either way, it will be a source of pride for both.

“Catching Greta would be so much fun,” Piancastelli said. “I definitely love to be able to have the Italian duo in action on the same team. I’ve caught her so many times but being able to catch her at AU, in front of the AU crowd, against all the elite players there, would be amazing.

“Hitting off Greta would be fun just because I don’t get to compete against her much. We’re always on the same team and we’re both very competitive, so getting a chance to hit off her will be challenging and a lot of fun for me!”

As for Cecchetti, she said she’s looking forward to having fun in her venture with AU. She’s proud of her role as a pioneer for other Italian softball players. And although she is 33, she warns that she hasn’t peaked yet.

“I don’t think that point has come yet,” she said. “I’m always thinking how lucky I am to get this far but, ‘What did I do to get here? How can I stay here? What can I do to do more and be better?’ I always have this mentality of, ‘I’m 33 years old now, but in my head I’m still that kid from Italy who is trying to do something Italian players have never done before and to push the new generations out of their comfort zones.’

“I didn’t even know softball was a thing in Italy, and here we go. We have so many kids playing in junior colleges and so many athletes trying to go to D-I. This is something we didn’t have when I started my journey. So it’s really exciting for me to see. Now I have people saying, ‘This is really cool what you’re doing. I want to play, too.’ These are opportunities I’ve never dreamed about when I was younger.”