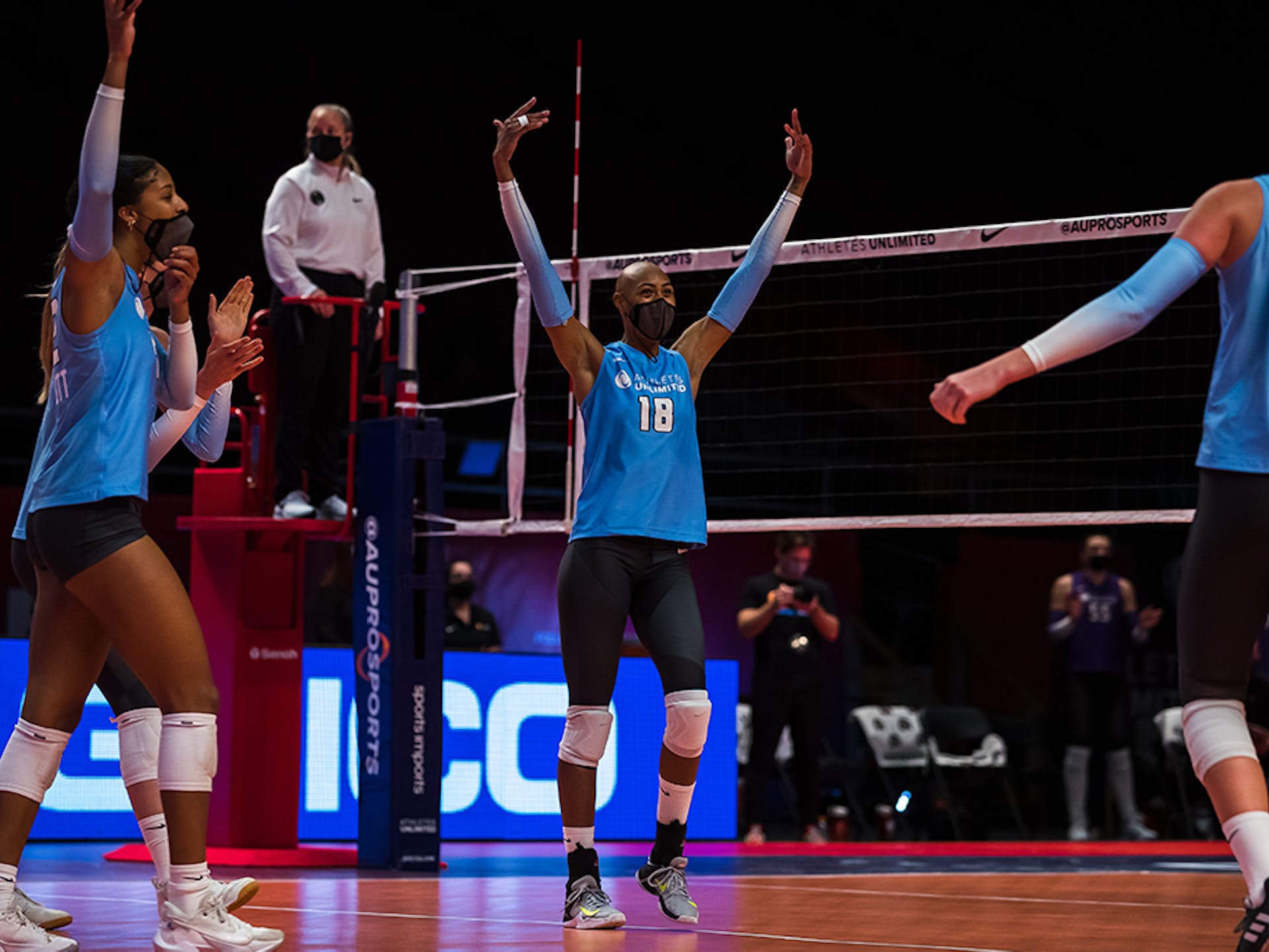 Deja McClendon scored a league-high 435 points on Monday night as Team Lowe (Blue) defeated Team Hunter (Purple) in all three sets and won the match, 75-57. With their win, McClendon and her teammates each received 180 win points.

McClendon had an incredible performance with 10 kills and a .560 attack percentage, three aces, eight digs, and two blocks. She was also voted MVP 1 for an additional 60 points.

“It’s not easy playing three nights in a row for five weeks, I will say that,” McClendon said. “But the adrenaline from the win and from this last game, where we really came together as a team I think, is flowing through all our veins, and we’re ready for our last week.”

In Set 1, Team Lowe found success with an aggressive serving scheme, obtaining three aces and causing Team Hunter to be out of system for a majority of the game. Although Team Hunter’s hitters struggled to score, they had well established blocking against opposite Karsta Lowe, obtaining three blocks against her alone.

“When you have a big hitter like Karsta [Lowe], she can help the offense in a lot of different ways,” Team Lowe setter Brie King said. “One of them is scoring, like she did on the first night [of the weekend] a ton, and another is pulling the block with her, and that’s what we saw last night and tonight, especially tonight.

“[Team Hunter] was really prepared to defend her well and we kind of noticed that quickly and then started to go elsewhere. It’s really easy for everyone else to score when they have a blocking system that’s prepared for [Lowe].”

McClendon finished off the set with a kill, earning eight stat points and giving Team Lowe the win at 25-20.

In Set 2, Team Lowe led the whole game and won the set 25-21. Lowe had a better offensive set, hitting .211 with five kills and McClendon, Abbott, Morgan and Nia Grant earned three kills each.

For Team Hunter, Briana Holman made her season debut and entered the match at 3-6. Throughout the set, she earned two kills for 16 stat points.

In Set 3, Team Lowe won by their largest point margin yet at 25-16. Although the two teams were tied several times early in the game, a 5-point serving run from King, followed immediately by a 3-point serving run from McClendon, allowed Team Lowe to build a 7-point lead. From there, Team Hunter evenly traded points with Team Lowe, but couldn’t stall Team Lowe’s offense long enough to catch up.

Abbott earned MVP 2 honors, giving her 40 points. She obtained 12 kills on 26 attempts for a .310 attack percentage and had 285 points overall.