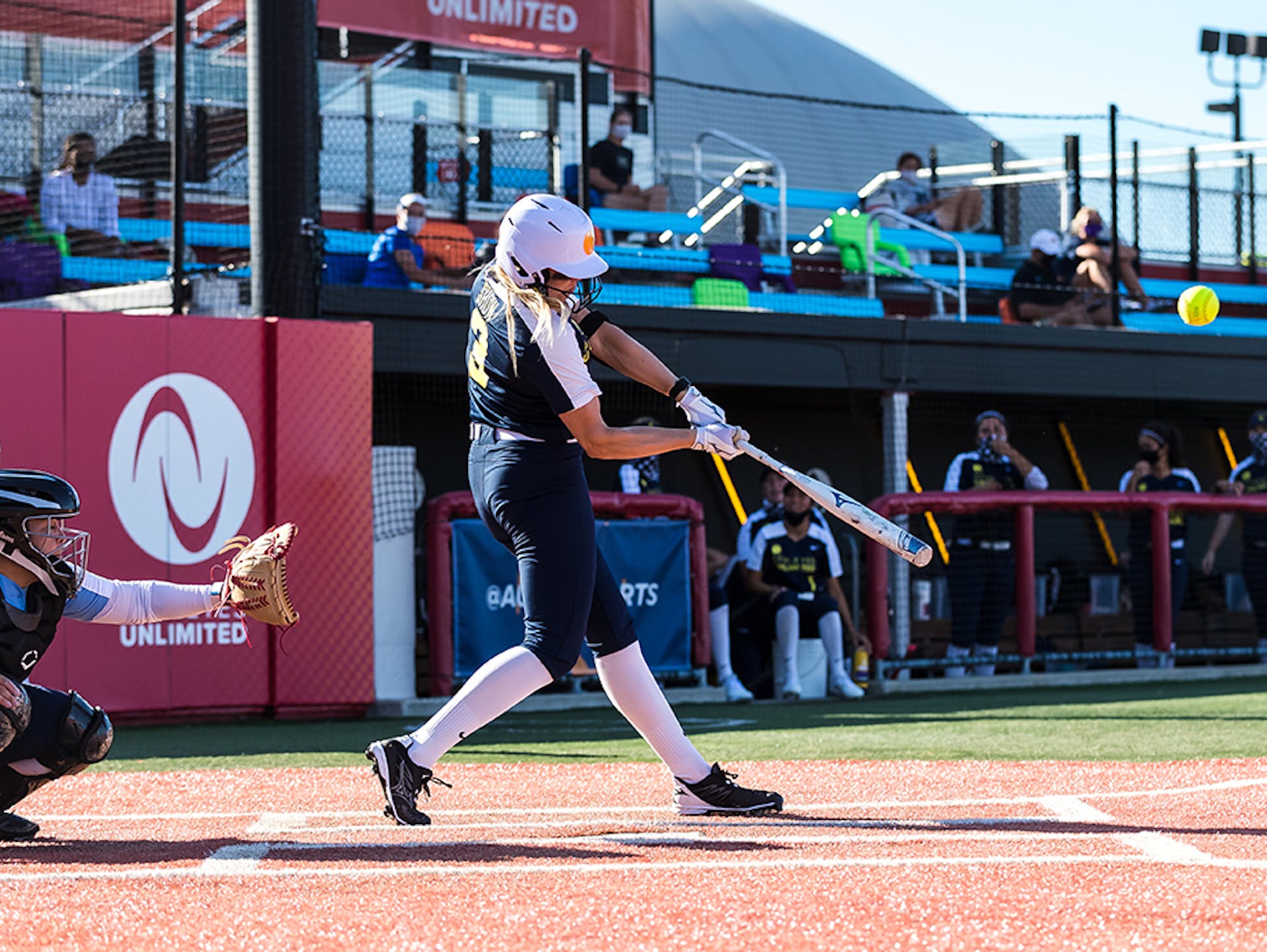 As she crossed home plate after hitting a home run in the sixth inning, Samantha Show gave a wry little smile and a sheepish laugh.

What else was there to do or say? Show’s blast to center field at the Parkway Bank Sports Complex was part of a five-run inning that widened the gap in an 18-4 victory by Team Wagner (Gold) over Team Pendley (Blue) in the second game of a doubleheader.

Show went 4-for-5 with a double and three RBI. She also pitched a scoreless inning in relief of starter and captain Haylie Wagner.

At the end of the day, Show led all points-scorers with 252. She earned 110 for her team winning the game, 102 for her individual stats and 40 for finishing second in MVP voting to teammate Jazmyn Jackson.

“I was seeing the ball really good,” Show said. “All of the hard work of the past two months has been paying off. It was such a fun game. It was nice to go back to back with Wiggs (Megan Wiggins). It was nice coming into my team and getting excited for winning that inning.”

Show and Jackson enjoyed a nice back-and-forth for individual points honors. Jackson earned the 60 MVP 1 points to go along with the 110 for the team winning the game and 70 for her in-game stats.

Those stats ran the spectrum. Jackson hit the first grand slam in Athletes Unlimited history when she connected in Team Wagner’s seven-run fourth inning. The opposite-field blast carried well beyond the wall in left-center field.

Jackson capped her day in the sixth with a bunt single that carried all of about 10 feet. She finished the day with 240 points, placing her second to Show and 10 ahead of Game 1 MVP and Team Warren (Orange) member Cat Osterman.

There was another nice footnote in the sixth, as Jordan Roberts homered in her first professional at-bat. Roberts earned 40 points for the homer and wound up with 150 for the game. Wiggins was named MVP 3 and totaled 190 points.

For Team Pendley, Sahvanna Jaquish homered and scored 60 overall points – 40 points for her home run, 10 for a single, and 10 from team points.

Jackson said she was not thinking about the individual points race with her teammate.

“I was absolutely not thinking about it,” she said after going 3-for-4 with five RBI. “We just want to win the inning. I think we’re all on the same page with that. I didn’t even think about my points once, actually.”

But there was no stopping Team Wagner the rest of the way.

“Pass the bat,” said Lilli Piper, who put up 140 points. “I think that’s super important for us. Get it done and give it to the next person and hope they get it done. Every inning counts for us. You guys know that. Win the inning, which is the biggest thing for us.”

Athletes Unlimited players are also socially aware. As other pro sports leagues chose not to play on certain occasions during the past week. The women here decided to take the field.

“There was a conversation of us, obviously, not playing, given everything that’s going on,” Jackson said. “It also has to be addressed, the gender inequality that we deal with as female athletes. We decided to play and use our platform, wear our masks, have some stuff going on on the field that really highlights what we stand for as players.

“I think the staff has done a very good job of asking us what we want, not putting anything on us. For us, it really wasn’t a question of playing or not … But because this is something people are going to be watching because nobody’s playing, ‘OK, let’s take advantage of this and let’s support what we feel is right.’”