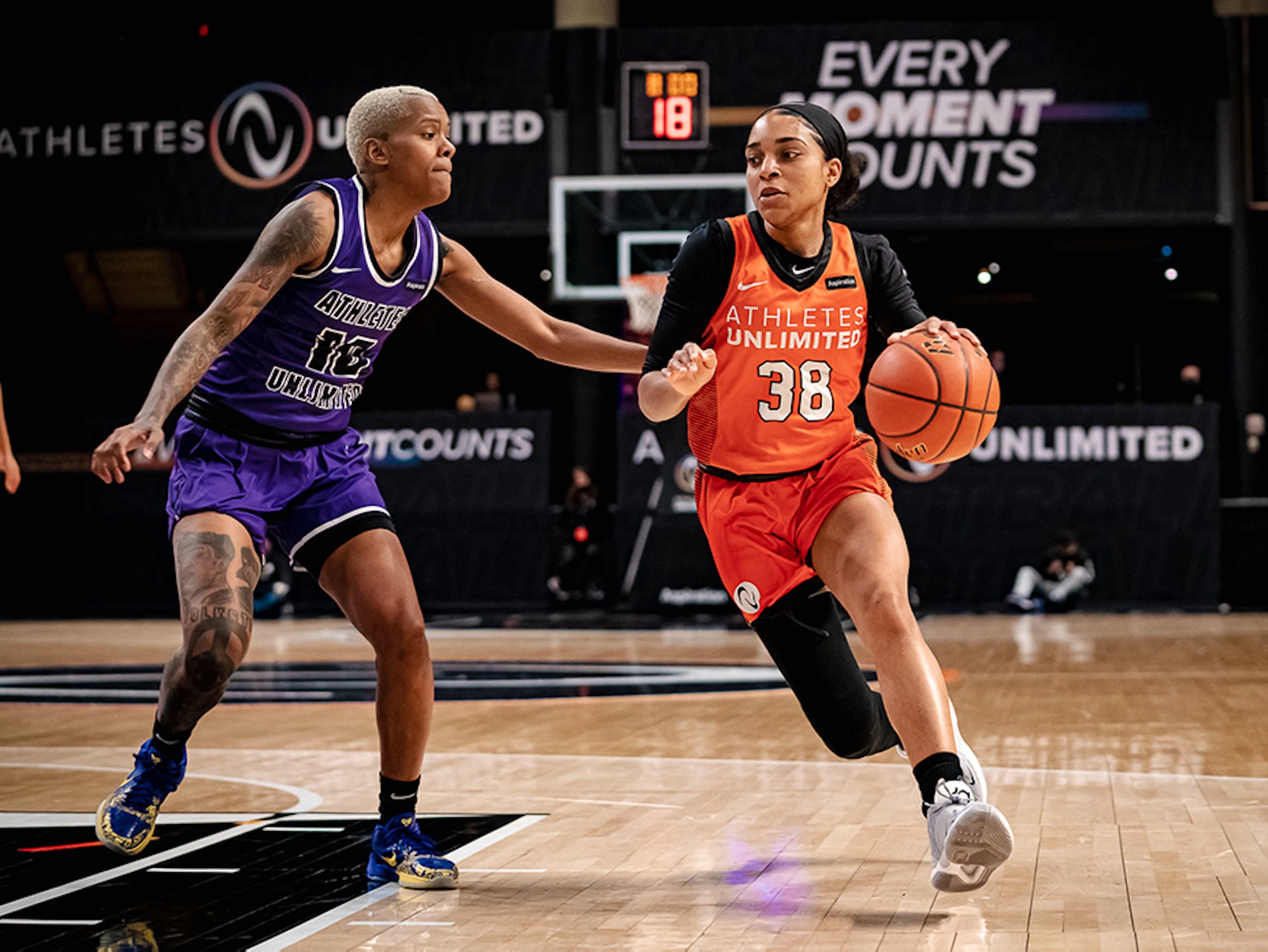 Preview: The final battle for the top spots on the leaderboard begins

LAS VEGAS — Team pride will be at the forefront as the final week of Athletes Unlimited unfolds, that’s a given.

But the battle for first place on the individual leaderboard will be the focal point.

The four captains chose the final rosters for Week 5, with dynamic duos back together for the last run and bragging rights for the inaugural season all around.

Brown opened the draft by straying from her usual first pick and chose center Kalani Brown – the fourth different player to be taken with the No. 1 overall pick – before coming back in the second round to grab her backcourt partner in success, Taj Cole, and then long-range threat Destinee Walker on the snake turn toward the third round.

“I actually thought about who everyone else was gonna pick,” said Lexie Brown, who will be playing alongside Cole for the fifth consecutive week. “I wanted to pick Taj first but I figured that she was still gonna be around when I got my next pick. Kalani has been a nightmare to guard for everybody. So, I haven’t played with her yet, so I wanted her on my team for once and it upset Tianna.”

Cole and the two Browns are averaging 44.8 points per game this season.

Hawkins, flanked by her son, Emanuel, grabbed sharpshooting Kelsey Mitchell with her first pick and followed with veteran Sydney Colson, who knocked down a half-court, game-winning overtime buzzer-beater in Week 4. One of the surprise grabs for Team Hawkins was center Drew Edelman, who had been playing with Cloud.

“I have E with me, helping me; of course, all the players that he wanted were already taken, but my team is looking pretty good,” Hawkins said. “The goal is to finish strong, come out every game with a lot of energy and just have fun out there.”

Harrison grabbed Courtney Williams with her first pick, reuniting the tandem and close friends who played together during Weeks 2 and 3, forming a dominating inside-outside combination. Williams, who missed Week 1 and played with Odyssey Sims’ team in Week 4, was taken with the second overall pick, marking the third consecutive week she has been selected at either No. 1 or No. 2.

The Harrison and Williams duo brings together an offensive threat for teams, as their chemistry was formed years ago and has carried into AU Hoops. They’ve combined to average 32.3 points, 13.8 rebounds and 10.4 assists per game.

Cloud opened her draft by saying, “Y’all thought we were gonna be broken up, the duo is back, I’m going with big guard DiJonai Carrington.” The two have played together since Week 1, when Carrington was a captain and chose Cloud to her team.

Carrington leads the league with 23.8 points per game, while Cloud ranks sixth with 17.3 points per contest.

For her quest in chasing Hawkins for the individual crown, Cloud aimed for chemistry with seven players returning from Week 4. Along with herself and Carrington will be Antoinette Bannister, Grace Hunter, MeMe Jackson, Lauren Manis, Imani McGee-Stafford and Antoinette Thompson. Also with Team Cloud will be CC Andrews, Jantel Lavender and Shannon McCallum.

Week 3 wraps up Saturday starting at 7 p.m. / 4 p.m. PT with Team Brown vs. Team Harrison and will close the campaign with a potential showdown for the individual title as Team Cloud meets Team Hawkins in the season finale.