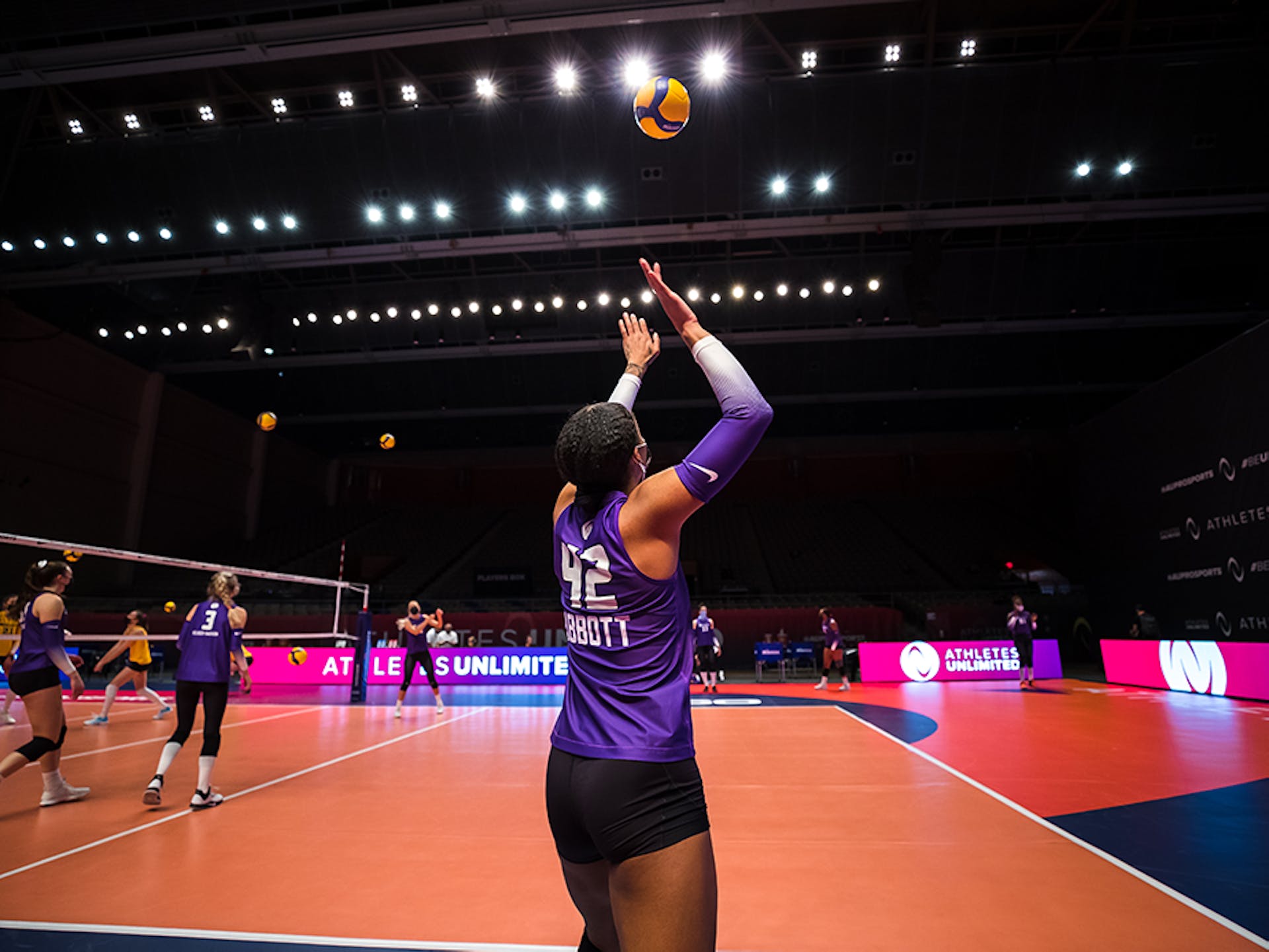 There really is no place like home. But when your home is in a bubble surrounded by new faces of people you’ve never met before, having someone that feels like family can mean everything.

For Emily Ehman, Payton Chang and Symone Abbott, having one another in the bubble means having that family.

For Ehman, it’s her first true reporter job out of college. While that can be intimidating, having her Northwestern teammates there for her has been particularly helpful. “When you have people here that know you so well, know what you’re trying to do and where you come from, [that] has been immensely helpful in feeling comfortable,” Ehman said.

“It’s not every day you get three of us in one job,” Abbott reiterated. “It’s really crazy but I’m thankful for it.”

It almost didn’t happen. If not for Ehman reaching out to Chang to offer up help on the reporter front, Ehman doesn’t know how she would’ve landed at Athletes Unlimited. But Chang said she knew as soon as Ehman offered to help out that she wanted her former teammate in Dallas, Texas.

“I was like yes, for sure,” Chang said. “She knows what she’s talking about. She knows the players. I connected her with Anya [Alvarez], our head of content, and I was like, ‘Hey I think she would be a really great fit for our team in trying to help us grow our presence digitally.’”

The excitement that came with Ehman joining the content team only grew when Abbott signed on to play for the league.

“Symone had told me a few weeks prior she didn’t love being in Turkey, [that] she was thinking about just hanging it up for good and then having me find out she was coming, I was so, so, so excited,” Ehman said. “Payton was really excited that I was coming and I was way more excited about Symone coming.

“Symone and I literally text every day, she’s one of my best friends. I was constantly texting Payton about roster changes or questions I had and she was like, ‘I’m so excited about Symone,’ and I was like, ‘What are you talking about?’” She laughed. “I had to find out through Payton that she signed a contract here.”

For Abbott, signing on with the league was a no-brainer.

“If I was going to end [my career] I wanted to end it on a better note and make sure I was ending for the right reasons,” Abbott said. After taking roughly three weeks to decide, she knew the answer. “I was like, ‘How could I ever turn this down?’”

How about dem @NUVball ‘Cats😼@symoney10 joins @emilyehman on #MatchPoint to talk about finishing with 29 kills on the weekend and 12 tonight, improving her passing from last night, how it felt for Team Lowe to sweep tonight, and her mindset heading into the final week of play! pic.twitter.com/zrP8pPZbfO

It’s been a crazy five weeks. For Chang, watching the league’s social media presence grow from less than 1,000 followers to over 18,000 has been a result of hard work and communication – both things that she says carried over from her time actually playing the sport. It can be stressful, but it’s also been a lot of fun.

“At times I want to be a fan and just enjoy it but I also need to post the highlights and think of cool captions to use,” Chang said. “But the fact that I get to do this as my job is so much fun.”

She believes being a student-athlete at two high-level institutions helped to prepare her for a job like this one. “I’ve been an athlete my entire life so I know what the athletes are going through. I know what they like and what they don’t like on and off the court.”

Ehman echoes Chang’s sentiments but adds that getting to work with Athletes Unlimited has helped her fall in love with volleyball again.

“I love that I don’t have to have the pressure of actually playing it,” Ehman said. Reporting on the league has been fun for her and, despite the 12-hour days, it’s been an easy role for her to step into. “Being here is a dream come true because it is the only professional volleyball league [in the U.S.] and I get to hang with people I idolized growing up. I love that I’m one step removed and can talk about it.”

For Abbott, the league has helped her to re-shift her focus, reminding her that everything going on around her is bigger than herself, that it’s a big thing to be a part of and represent. That mindset has motivated her into bringing her A-game. “I want the sport to get big in America,” she said. “That’s the most important thing.”

With only five weeks to play a season, it’s meant long days and crazy hours, but the opportunity to grow professional volleyball in the US has made it all worth it.

“I definitely think it’s a great way to reinvent how sports are being played,” Chang said. “The fact that AU has been able to give volleyball this opportunity has been huge.”

“I think it’s just showing there’s a market out there even though we haven’t even reached the brink of what it could be,” Abbott said. “I think it’s showing that this is a profitable, popular sport.”