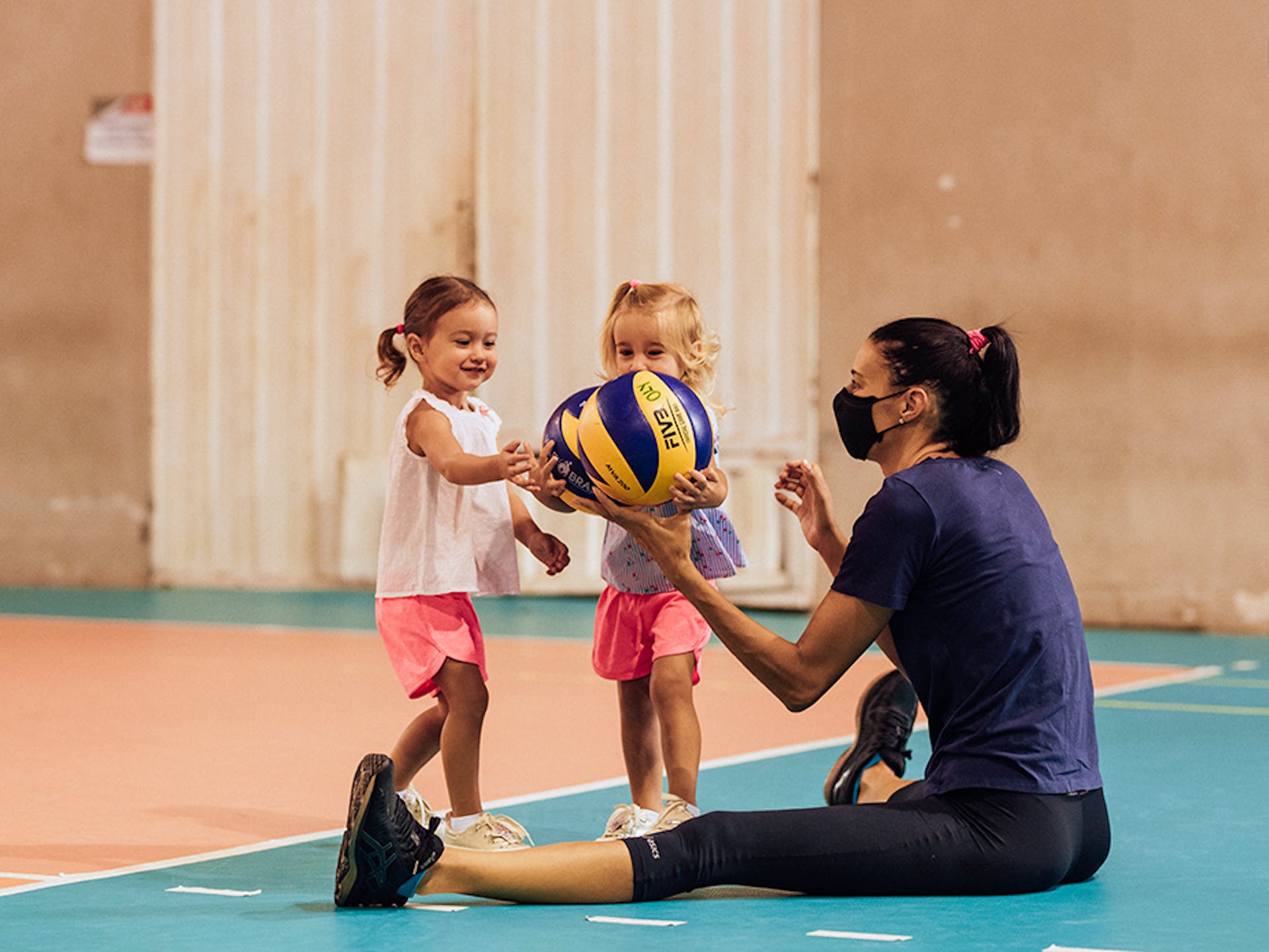 It wasn’t that Katie Carter, opposite hitter from Fort Worth Texas, didn’t want to continue her professional career after giving birth — at first she just didn’t see how it could be possible.

“I thought I was done and I accepted it,” Carter said.

But Carter, and many athletes like her, are finding new solutions to the many challenges that face moms who play professional sports. Innovations, like the Athletes Unlimited policy that covers certain childcare expenses, are making it possible for women to manage motherhood and a career as an athlete.

For athletes like Carter, it’s welcome news. Timing a pregnancy during an athletic career is difficult. When Carter and her husband first began trying for a baby they waited until the end of her final season in France.

“I got home from there and wanted to start trying,” she said. “I went off birth control. Then, it didn’t happen.”

As the months ticked by and the next season approached, Carter reluctantly signed with another team abroad, deciding with her husband that they would try again after the next season.

She had just received the contract and was getting ready to sign when she decided to take one more pregnancy test. This time, it came back positive.

“That was an interesting feeling because it was automatically shifting from, ‘I have this really great contract,’ and I was starting to train hard again and literally had my bag almost packed. Then it was like — ‘Let’s just unpack it and my career’s done.’ Just like that.”

The emotional shifts were jarring. “That was almost a sadness. A tear between switching gears.”

Still, Carter embraced her pregnancy, excited to begin building her family. Then, she miscarried.

Not feeling physically fit enough to join another team, she decided to take time off and recover from the miscarriage. Several months into that journey she got pregnant again, giving birth to healthy daughter Noelia Lynn nine months later.

Despite embracing motherhood, after giving birth Carter questioned what would be next for her professionally. Going back to work as an athlete is much different from returning after maternity leave to an office job, where you can pick up the phone or log into your email and get back into a rhythm. For athletes, the physical changes after giving birth, and the prohibitive cost of childcare during training, can be challenges. Without professional goals, Carter began to question herself. “Who am I, what’s my purpose? What’s my personal thing that I do? I don’t do it anymore because I can’t. Because I’m a mom.”

These feelings are common among some professional athletes looking to return to sport after giving birth.

“Whether you continue to work or not after starting a family is a personal decision. But that decision should be your own decision and not dictated by the expectations or limitations set by others,” said Molly Dickens, cofounder of &Mother, a non-profit focused on helping women pursue both careers and motherhood and Carter’s Athlete Causes partner for the upcoming volleyball season.

“In any professional industry, stereotype and bias about mothers and what they are capable of leads to lowered expectations and higher limitations for women who have children. This is especially true for professional sports due to the physical nature of the job. Can a woman really compete at the highest level after her body has gone through pregnancy and childbirth? In most cases, yes. So why should someone else decide what a woman’s body is capable of when she knows her own body best and her best path back to health?”

Pushing back against the bias is challenging, but an increasing number of athletes are doing so. Surrounding them with the right resources, they say, is key to giving them the opportunity to succeed.

“I feel like the biggest concern as a mom, when I agreed to play, was that I want to make sure my kids have childcare during practice. I want to make sure they’re accommodated wherever we’re living and that I can still be with them and still be able to perform at a high level,” said Amber McKenzie, who will be playing in Athletes Unlimited Lacrosse, coming in summer 2021.

It’s a sentiment echoed by mothers worldwide. “When I am with the Brazilian National Team, in the training center all the moms take their kids there with them. And this is amazing,” said Sheilla Castro, two-time Olympic volleyball champion for Brazil and member of Athletes Unlimited. “But when I have an important championship in another country, I don’t feel safe to take my kids and leave them with a babysitter, because I wouldn’t have a lot of time to stay with them and that could be a problem for my focus.”

While it’s not always practical for moms to bring their children to competitions full-time, finding creative ways to leave that choice to them is a meaningful step.

“Offering ways for moms to be able to have their kids present, like being able to offer the financial assistance for flights, an extra hotel room or housing with an extra room, I think that goes a long way,” said two-time Olympian and softball pitcher Cat Osterman.

It wasn’t possible for her nine-year-old stepdaughter, who has recently taken up pitching in softball, to be present during the inaugural Athletes Unlimited season, but Osterman knows that as a stepparent, sharing a love of softball is crucial for building bonds with her stepdaughter. It’s time together that she knows will come at a sacrifice in the future. “I think female athletes end up spending so much of their financial gains on being able to have their family present.”

As additional support and changing perceptions empower more moms to show up and do the jobs they’re qualified for and capable of, they’re creating momentum for future moms to do the same.

They’re discovering that the stereotypes of the past aren’t based in fact, and are simply just that – stereotypes.

“After giving birth, you kind of feel like a powerful human being,” Carter said. Winning a championship or two is nothing a mom can’t handle.