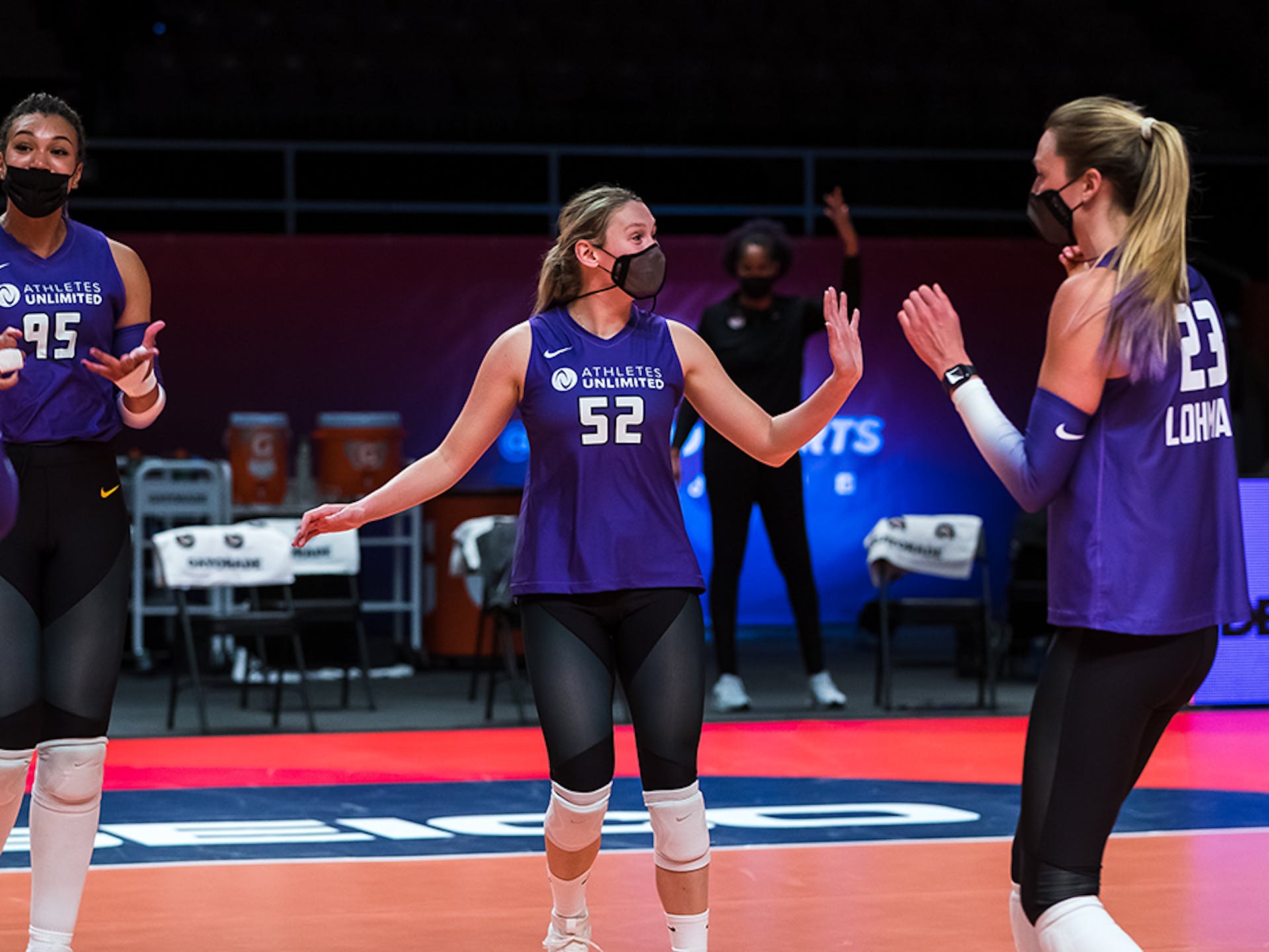 Kelly Hunter: From last minute sign on to rising up the leaderboard

When Kelly Hunter agreed to be on “stand by” as a reserve player less than a week before Athletes Unlimited’s inaugural volleyball season, she had no idea she’d be the first setter in the league’s history to earn enough points to earn a captainship position.

Instead, the 2015 & 2017 National Champion was intending on spending her spring coaching at her alma mater, the University of Nebraska. In fact, Hunter felt so strongly about sticking to her prior coaching commitment that she’d already turned down the opportunity to play in the league once.

With the uncertainty around how the pandemic would affect college sports, Hunter didn’t commit to joining Athletes Unlimited when Volleyball Director of Sport Chris McGown first presented her with the opportunity in the summer of 2020. Hunter officially declined the offer when it became clear that the Big Ten was moving college volleyball’s season to the spring semester.

Yet, even when Nebraska’s season did get started in the spring, the pandemic still created complications and caused the Huskers to postpone their first few matches.

As Feb. 5 rolled around, and the majority of the professional volleyball players had already arrived in Dallas, Texas to begin their quarantine phase, Hunter was still coaching in Lincoln, Nebraska.

Then Jordan Larson and Kristen Tupac called her.

“[They] reached out to me and said, ‘How interested would you be in coming? We know it’s really short notice, but our foreign setter is having issues with her Visa,’” Hunter said.

Hunter was still undecided on missing Nebraska’s volleyball season, but her family and friends pushed her to seize the opportunity – including Nebraska’s head coach John Cook.

Hunter stated that Cook told her it was unclear how the rest of Nebraska’s season would pan out since they’d already missed multiple matches and their season would be affected by other team’s COVID-19 positivity rates, not just their own.

Cook had told Hunter to join the league the first time the position was presented to her, and he didn’t plan on letting her miss it a second time. As her head coach when Hunter helped lead the Huskers to a NCAA Championship in 2015 and 2017, he knew exactly what she was capable of contributing to the league.

When it became formalized that the setting position was available, Hunter officially became a player in the inaugural season.

“They sent me a contract, I signed it, and I was on a plane the next day,” Hunter said. “It was crazy. I forgot so much stuff.”

With her last second signing, Hunter was the second to last athlete to arrive before the season started.

Prior to Athletes Unlimited, Hunter played professional volleyball in Turkey for the 2018-2019 season, but decided to not sign another contract when hers expired, choosing to coach with Nebraska instead. She acknowledged she didn’t love being away from home for so long and missed the team connection she’d had in college.

“It’s different from college because it’s more of a job, obviously, and it’s very individualized. Everyone else is kind of thinking the same way, so it’s not that family team dynamic,” Hunter said. “You don’t really get to develop that family and those friendships, and, for me, I love volleyball because of the relationships.

“Being away from home for eight or nine months and seeing people get married, people having babies, or family members passing away was really sad. I felt like life was passing me by when I was just in my apartment all the time and playing volleyball. I didn’t hate it by any means, but I was kind of like, ‘Well, if I’m going to be content, maybe I can be content at home with my family and friends and loved ones.’”

With Athletes Unlimited’s unique style of rosters shifting each week, Hunter admitted that she’s faced a similar obstacle with adjusting to the teams, but that the league’s other factors have made playing professional volleyball much simpler.

“Normally, you know the way people move around you on the court, and you don’t really get that vibe here. You can’t figure that out in three days of practice,” Hunter said. But “even though I was late, I feel like I bonded with everyone really easily and just got to know everyone quickly.

“We do like to say that we’re all one big team, and so to be able to just hop around from team to team and have it feel seamless has been really cool.”

Three weeks into competition Hunter has now selected her own team as she’s found herself in the top four of the leaderboard and in a captain position for Week 4.

Wrapping up the Most Dramatic Week 3 Finale™️ on #ATFR (After The Final Rally) is @KellyHunter03!

She shares w/@emilyehman about recording a double-double tonight (37 A/14 D), how it feels to be the first setter to become a captain, & on being undefeated in match play so far👏 pic.twitter.com/vqSvAR5YaI

After the season ends, Hunter plans on returning to Lincoln to help coach at Nebraska for the rest of their season. Although she doesn’t plan on going abroad again to play volleyball, she said she’d be open to returning for future seasons with Athletes Unlimited.

“I think it’s awesome to see how well it’s done so far and to be a part of the first group. I’d be honored if they asked me back. It would just depend where I’m at career-wise and with life for if I’d be able to make this work again,” Hunter said. “But that’s why this league is so cool – you can play volleyball, it’s a short amount of time, and hopefully, in the future, family could be here.”