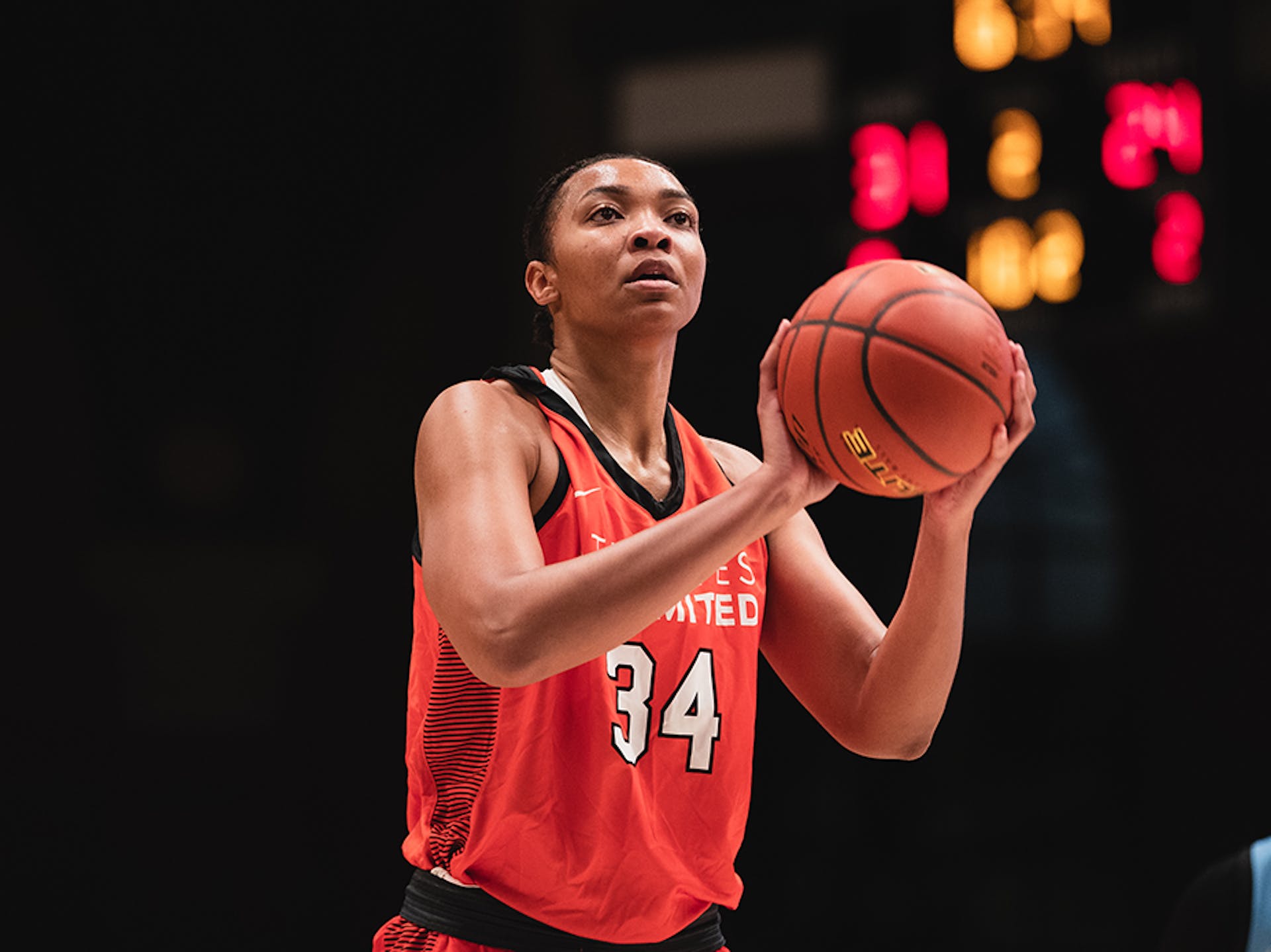 Easier said than done, but it’s a mantra Imani McGee-Stafford has learned to live by.

She’s had no choice, after a traumatizing childhood that saw her endure a rather embroiled divorce and custody battle between her parents, being sexually molested by her step-brother, and ultimately having her mental health challenged more than a young lady should.

It took many years for the woman who now wears a bright smile and intoxicating charm very well to embrace what she feels is a calling in life.

She was scorned, embarrassed and ashamed.

To this day, when she confronts her own mental health issues, just to face everyday life situations, it can be a struggle.

But she wins every time.

“A lot of it is doubt, a lot of it is fear,” McGee-Stafford said. “And I have to go through that because this is my purpose, and I know that.”

She knows it because every time she gets nervous or wants to step back from putting in the work that serves her fans or people who have come to admire her, she meets somebody new who reveals to her that she’s been telling their story.

“They’re like, ‘Thank you,’ or like, ‘I’ve never been able to tell nobody. Thank you for doing this work.’ So it’s Kismet every single time.”

Her father sat courtside during the final week of the AU season, doing media interviews while buttons were popping with a proud chest bowed in front of him.

“She’s always been a very caring, loving person,” said her father, Rev. Kevin Stafford. “Humanity is what she really aspires to be, a humanitarian. She has ministry in her blood, and she uses her life experiences – and she’s had some tough experiences – and she’s channeled them, she’s processed them. Ultimately, she has found a focus to go through what she’s gone through for the sake of other people. So it’s exciting to see that she’s been able to ultimately go through, get through and use it to help other people get through.”

McGee-Stafford facetiously labels herself a killjoy.

She refuses to shy away from talking about mental health and continues to do so in a nonchalant manner. No tip-toeing around the issues for the former Big 12 Defensive Player of the Year.

At 6-foot-7, there’s no tip-toeing around anything.

So as easy as it is for McGee-Stafford to talk hoops, it’s just as simple for her to talk about mental illness, or suicide awareness, or sexual violence.

“I do it in such a way that makes it like, ‘Did she just say that?'” McGee-Stafford said. “Because that’s what it should be. … And until it gets to the point where we can sit down and have this conversation, that’s how we get to making movement and making progress.”

McGee-Stafford believes it’s a spectrum, just as sexuality is, just as any other aspect of life people must deal with on a day-to-day basis. And the last thing she wants to hear are people patronizing the issues or downplaying them by telling others they shouldn’t feel a certain way because of what they have in their lives or who loves them.

“Sometimes you’re going to be perfect and never have a mental health crisis or never deal with mental illness,” McGee-Stafford said. “However, some days you’re gonna feel like shit, and you’re gonna be like, ‘How do I process this?’

“You still have to deal with your mental health, and you still have to make sure you’re checking in with yourself and giving yourself that space. So I think like that’s the biggest thing because I think we’re so scared to have these conversations.”

She knows, because she was one of those people.

A lot of it is doubt, a lot of it is fear. And I have to go through that because this is my purpose, and I know that.
Imani McGee-Stafford

McGee-Stafford said she used to run from embracing her role as a mental-health advocate, but remembered what her mother used to tell her, ‘To whom much is given, much is required.’

“And I hated it, like, hated it every time,” said McGee-Stafford, a published poet. “I used to be like, ‘I didn’t ask for this.’ But in college, I started telling my story and started sharing my poetry. My poetry was confronting my abuser.”

It was then she realized how powerful her inner-being, and presence in others, was an invaluable asset for many people to heal. One teammates’ mother approached her in tears, telling McGee-Stafford she was revealing her story, too, and never had the bravery to tell anyone.

And it clicked, as McGee-Stafford says it was a sign why none of her suicide attempts were successful.

On the contrary, though, as the unsuccessful attempts were a success in a sense she’s alive to follow through on what she’s been called upon to do. Suddenly, she realized why she stood 79 inches from the ground and stood out in a crowd. She understood what led her to the basketball court for a career.

“All those things just kind of came full circle so for me, I realized that while I have this platform, I’m gonna do something that’s necessary with it,” McGee-Stafford said. “I don’t know what it feels like to walk into a crowd and disappear. Being famous and all that stuff, it’s not really that cool to me. But even if I’m nobody, someone’s gonna talk to me because I’m tall and I’m different. So for me, it’s way more important to me to use this time and talk about things that are necessary.”

As a result, McGee-Stafford said she’s been in control of her mental health for close to five years now, unlearning shame from being sexually violated and understanding how powerful her role in society can be, given her platform.

What she once saw as mental illness, turned into strong mental health. She no longer looked at depression and battling thought-provoked demons of herself as a negative or that she was incapable of taking care of herself as an adult.

“It’s hard because you’re an athlete, you have everything people want,” said McGee-Stafford, who has established her own non-profit, Hoops and Hope, in 2019. “So to you in your mind, you’re like, I can’t complain, because I know so many people that would give their life to just do what I’m doing for a day or to have the things that I had. It’s just a lot of giving myself a break. I’m very hard on myself and just being like, ‘It’s okay to not be okay.’” A degree in accounting theory from Texas in hand, McGee-Stafford stepped away from the 2020 and 2021 WNBA seasons to purse a law degree, as she reached a point where she wanted to do more. For her, it translated to law school.

It’s an accomplishment that may be just as big as, if not bigger than, becoming a professional basketball player.

After all, when your mother was the second pick in the inaugural WNBA Draft and is a Hall of Famer, your brother plays in the NBA, and you have the same tools, there’s an expectation to perform on the hardwood.

“This is the first time where no one’s cared who I was, I literally have to do it,” said McGee-Stafford, who has completed a two-year accelerated program and after this semester will have six classes remaining before earning her law degree. “No one’s making moves for me to do this. No one is moving doors. It’s just me.”

And just as she and the 43 other women in the league preached about representation during the Athletes Unlimited season, she says representation for Black lawyers – both men and women – has become a passion for her.

“When we try to do things that are equitable, it ends up still disproportionately affecting marginalized communities,” she said. “It’s very much a white-man job. There are less than 5% men or women Black lawyers, and that number gets smaller as we continue to go. And so it’s just about being in the room and representation, even just feeling comfortable being in these spaces.

“It’s a lot easier to go somewhere you see yourself, you feel comfortable. And it gets a lot harder when you’re the only gay person in this room. You’re the only Black woman, the only Black man, the only Hispanic man. You know what I mean? It’s harder to feel confident and comfortable in those spaces. Imposter syndrome is so real. And it’s hard to be comfortable in that space when you don’t see yourself. So for me, my goal is to get there and then show more people how to do it too.

“I think just with everything going on with being a Black woman, first and foremost. We’ve seen how racism has just become so prolific in our environment, or at least now we see it in public right? And then also being a woman and a sexual abuse survivor.

“I just want to be a voice in the room.”