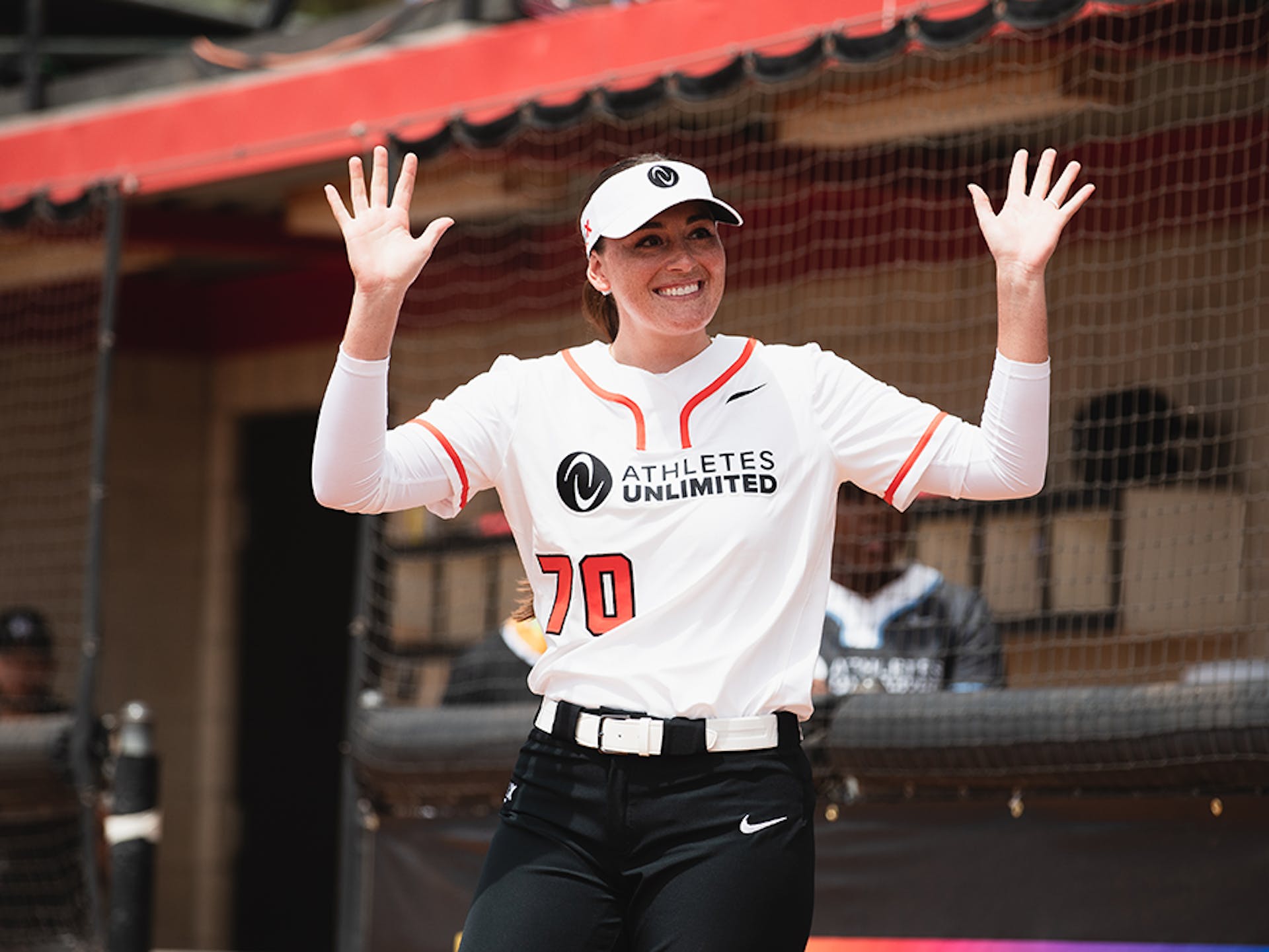 The road to Athletes Unlimited Softball for Andrea Filler has taken her around the world, gotten her in touch with her ancestral roots and been culturally enriching.

This summer, it landed her right at home in Evanston, Illinois, just a long flyball from Parkway Bank Sports Complex in Rosemont.

The 29-year-old Filler finally got her first chance to play for AU in June, when she finished an impressive seventh on the leaderboard in San Diego. She got off to a strong start in the Championship season in Rosemont, where she has fit right in with players she has competed with and against for years, whether it be in college, the professional ranks or as a member of Team Italy in last year’s Olympic Games.

“It’s been a really fun time, just to have the opportunity to play with all of the players who are in the league who I have played against my entire career,” she said. “I think my favorite part about it is getting to know people personally. You get to know them as a competitor, so you start to formulate, ‘Oh, they must be like this or like that, their personality must be a certain way based on the way they compete on the field.’

“Then you meet them off the field, and it’s like, ‘Wow, it’s really great to know them,’ and learn  about their past and their path to softball. Everybody has a unique journey. So it’s been really fun.”

Athletes Unlimited is the current way station for Filler, a native of Fort Wayne, Indiana. After she played two years of college softball at Boston College, she transferred to Northwestern, also in Evanston, where she obtained her bachelor’s degree in communications and her master’s in sports administration before earning a School of Professional Studies certificate in leadership and marketing. She worked as director of operations for Northwestern’s softball and field hockey programs from 2018-21.

Filler played professionally for the Chicago Bandits of National Pro Fastpitch and as a pro in Italy while trying to obtain Italian citizenship (through her maternal great grandmother) so she could become eligible for the Italian national team.

Along the way, she was able to enjoy, soak up and taste the culture of Italy.

“I grew up in a very traditional Italian home, so we have a lot of the same customs that you see in Italy,” she said. “That was really fun and comforting for me, a lot of the stuff that I was used to in my home, like sitting down as a family for a meal and staying at the table from dinner through dessert through coffee.

“Just to learn more personally about the culture of Italy. It’s completely different than our lifestyle. There’s no one right or wrong way to live. I think it makes you appreciate their lifestyle. Over there it’s not so work centric. It gives me good perspective. It gave me really good perspective of work is work, invest your time in your people. That’s one thing I always carry with me from my time over there.”

It took some legal wrangling for Filler to obtain Italian citizenship. She had to win a court case that challenged Italian law saying citizenship could only be passed down on the male side of a family. Having succeeded in that, Filler was able to represent Italy in the Olympics.

“It was an extremely unique experience,” she said. “I’ve played a lot of softball games, a lot of tournaments … But I think that setting in itself was so unique. You’re playing at the highest level, and you’re representing something that’s more than yourself, as well. You’re representing for your country and for your heritage, and I think that gives you more meaning behind the games you’re playing, every pitch that you’re playing. And for the sport, as well, to be playing softball when the sport was taken out of the Games for 12 years, 13 years. It meant a lot to be that person in that position to be playing on that stage, representing our sport at that level.”

While playing for Team Italy, Filler was teammates with Erika Piancastelli and Greta Cecchetti, both of whom play for AU.

“It’s so great,” she said. “I think the one hard part about playing overseas when you live here permanently and are from here is you build great friendships with your teammates and for me personally, I live there for three or four months at a time, and then I come back home. It’s hard when you’re not with each other all the time. You kind of get ripped from that setting, and you have to try to stay connected somehow.

“It’s just really cool that they’re both here now. The three of us have shared so much, the good and the bad through this journey together. So it’s really cool to be playing here together but also doing it together and representing Italy softball here on this stage and showing everybody from Europe and from Italy that this is something that’s attainable, too, to play on this stage. It’s always great to do it with teammates you’ve gone to battle with before.”

With her love for softball as alive as ever after the Olympics, Filler kept AU in her sights. After some persistent knocking at the door, it finally opened.

“The past two years, I was a replacement player, but I was pursuing making the Italian national team final roster,” she said. “Some of the requirements to be on the Italian national team was to play in the pro league in Italy. That was my main focus. I was a replacement player, so if somebody got COVID or somebody got hurt, they would maybe call me in. But I was overseas, so it was a little difficult to make my way over here if I did get the call. It didn’t end up happening.

Even with a seventh-place finish in AUX, Filler was not setting specific goals for Championship season.

“Honestly, I didn’t come in with any expectations of, ‘I’ve got to finish in top five,’ or anything  like that,” she said. “I wanted to get comfortable on the field as quickly as possible. In any new setting, especially in a really competitive setting, it’s kind of hard to settle in and feel yourself right away. My No. 1 goal was I want to come in and get comfortable, get my feet underneath me. At AUX, I ended up finishing seventh, and that was great. I was very happy with that. But the competitor in me was like, ‘I know I can do better.’

“For this one (Championship season), I want to compete every at-bat. I want to win every pitch. I like to keep my mindset more on the things I can control and the things that I can keep within myself. So just being competitive with every pitch, every at-bat,  playing hard every time.

“And lastly, being a great teammate and showing people who I am as a person and letting people get to know me, being open, vulnerable and forming some great relationships. I think at the end of the day we’re all out here trying to do the same thing, which is to grow our sport and to put the best product on the field every day. I think one thing that’s really fun about AU is we play with different teams every week. We get to know different  people every week. I’ve really enjoyed that experience of getting to know different people and growing relationships that way.” 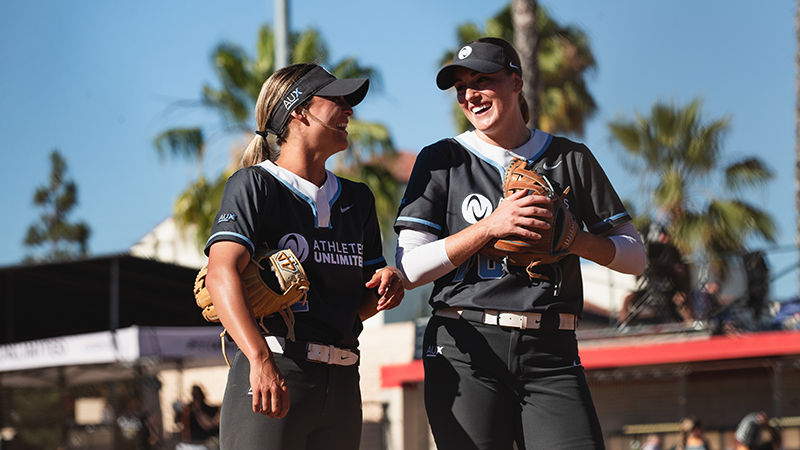 “Especially after the Olympics, you kind of settle down back at home and you start to think about, ‘Wow, what did I just do?’,” she said.” The Olympics was such a fast time because when we got there, we spent some time practicing in Japan and we had the week of the games and then  we had to leave right away. So it was like a whirlwind time. It was really fast.

“Once I got home, I kind of settled down. I was like, ‘Wow, I can’t believe, No. 1, that I just played in the Olympics and was in Japan playing at the highest level of the game.’ Then you start to think back about your career. I started playing in a Little League and I didn’t know where softball would take me. I was just playing, and it was fun. I’ve gone through all these different stages and played at different levels.

“You sit down and think, ‘What more is there? What more could there be?’ And this (Athletes Unlimited) kind of falls in your lap and you’re like, ‘OK, this is incredible,’ just continuing to play the game at the highest level. It’s an honor for me to be able to do that, but I think the coolest part for me is how it’s brought my family together and for me, playing on the national team, it made me feel really connected to my extended family members in Italy, especially my great grandmother, who I didn’t get a chance to meet. I just felt really connected to her … The fact that I got my citizenship through her was a really cool thing for me. I’m really connected to her through that.”