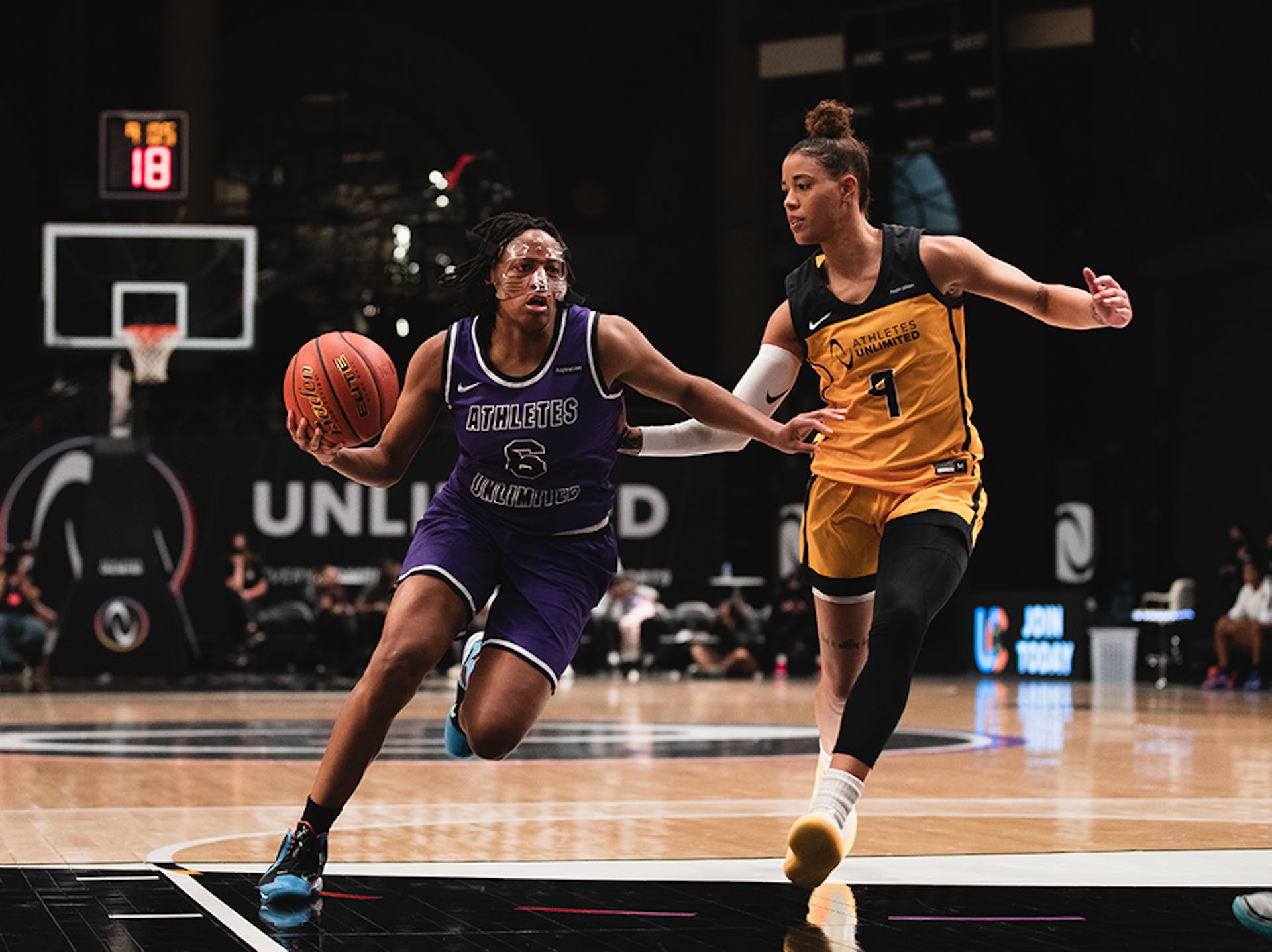 LAS VEGAS — Natasha Cloud has a six-year professional career under her belt, with a championship to go along with it.

Dijonai Carrington has been a pro basketball player for one year.

Doesn’t matter. The synergy between the duo was automatic from the opening tip in week one of Athletes Unlimited basketball. So when Cloud had the first pick of the draft for week two there was no question who she was taking.

Cloud scored an Athletes Unlimited career-high 30 points, Carrington scored 21 and Team Cloud knocked off Team Russell 105-94 on Wednesday in the nightcap of opening night of the second week of the season.

Team Cloud became the fifth team to score 100 or more points in a game this season.

Kalani Brown, who averaged 20.0 points last week for Team Sims, added 17 points and 7 rebounds for Team Cloud, which looked unstoppable with all three on the floor at the same time.

“My first two picks were DiJonai and Kalani, and I knew that they were gonna give me whatever I needed,” said Cloud, who also had eight assists and seven rebounds, coming close to her first career triple-double. “They’re phenomenal players, regardless of their age, regardless of their years in the W. … They definitely hold me down and they held me down tonight.”

Team Russell erased a 19-point deficit and pulled within five, 90-85 late in the fourth, but Cloud, Carrington and Brown combined to score the team’s final 15 points and seal the victory.

Cloud, Carrington, Ty Young, Marjorie Butler and Destinee Walker were a part of Carrington’s squad that finished 3-0 and averaged 95.3 points per game last week. The five players accounted for 39.5% of Team Carrington’s 286 points with 113. Wednesday night they combined for 64 points – 60.9% of the team’s points.

Team Russell was led by captain Mercedes Russell, who had 20 points and 11 rebounds, her third double-double of the season. Joining Russell in double digits was Kelsey Mitchell (17), Nikkie Greene (13), Rebecca Harris (13) and MeMe Jackson (11).

Team Russell scored 41.3% of its fourth-quarter points from the free-throw line, while Team Cloud shot 60% from the floor in final period.

“Crunch time, they’re professionals so they know the game and they play a really good tempo,” said Greene, who added 11 rebounds for her first double-double of the season. “With Tash at the point guard, she’s gonna see her open players and we kind of had a little bit of defensive breakdowns.”

The teams battled closely in the first quarter, with only one lead change and three ties, and neither got a lead bigger than six points. Team Russell led 21-18 after one, with Greene scoring seven points and grabbing four rebounds to lead the way. Cloud led her squad with seven points.

The second quarter was an entirely different story, as Team Cloud used runs of 9-0 and 20-5 to take a 38-26 lead midway through the period, sparked by Carrington, who had seven of the 20 points. Team Russell, which had one 3-pointer and two free throws to that point, closed the half on a 16-11 run to pull within seven thanks to Harris, who scored all 10 of her first-half points during the run.

With eight players grabbing at least one rebound in the first half, Team Cloud out-rebounded Team Russell, 27-22, and had the edge with points in the paint, 24-16.

After Team Russell pulled within one at the 7:26 mark of the third quarter, at 53-52, it wouldn’t see another point for nearly four minutes, as Team Cloud held it scoreless for a stretch of 3 minutes, 59 seconds. And in that span, covering a little more than 3 minutes, 20 seconds, Team Cloud used a 16-0 run to open a 17-point lead with every point during the streak scored by Cloud and Carrington. Cloud buried three 3-pointers, while Carrington had two field goals and three free throws. Team Russell hit 50% from the floor in the third, but Team Cloud was 9 of 16 (56.3%), including 4 of 8 (50%) from 3-point range.

“It’s something you can’t really describe … it seems like we’ve played together for a while, and believe it or not this is the first time we’ve ever played together,” Carrington said. “I think that just speaks to how great of a point guard she is, that she puts the ball on the money and allows me to thrive. I like to run and she likes to push the ball so it’s a great partnership.”

Notes: Cloud finished the night with 596 points after being named MVP 1 (+90 points). Earning 60 additional points for MVP 2 was Mitchell. She tallied 292 points. Carrington earned MVP 3 honors to add 30 points to her total for 386 points overall.

Team Cloud won the second and third quarter (each worth 50 points), as well as the game for 200 win points. Each player on Team Russell earned 100 win points by winning the first and fourth quarters.

The teams combined to shoot 35-of-38 from the free-throw line in the game. … Team Cloud’s 19-point lead late in the third quarter marked the largest lead at any point by a team this season. … Mitchell’s 17-point effort was her fourth straight double-digit scoring performance this season.

Where to Watch: Basketball Week 4