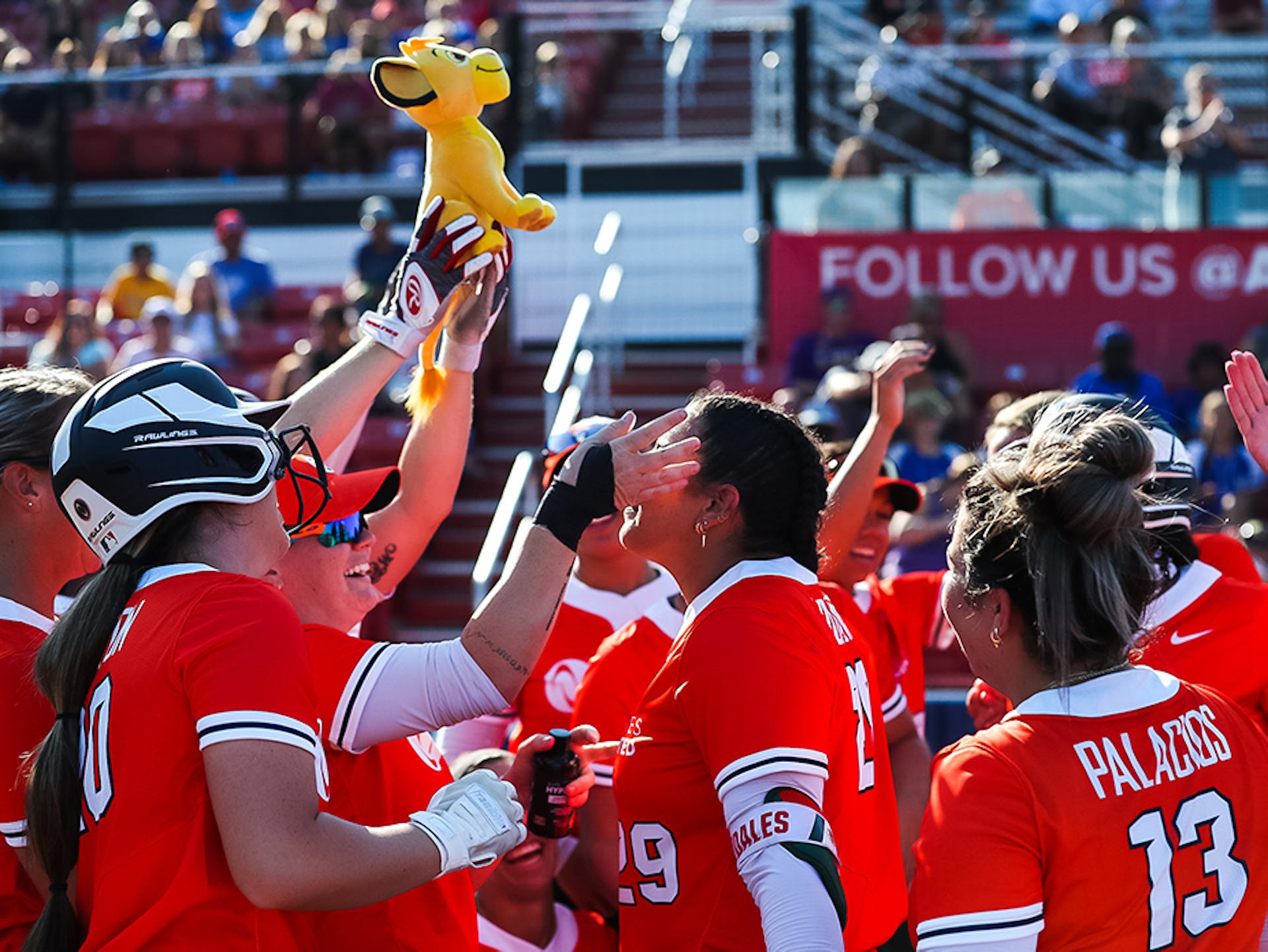 Denham and Wagner combine for two-hit shutout against Team Osterman

Alyssa Denham may have been a surprise starting pitcher for Team Jaquish (Orange) Saturday, but she quickly justified the faith captain Sahvanna Jaquish showed in her.

“I was a little nervous,” Denham said. “(Jaquish) told me a couple days ago, so she gave me some time to sit on it. That way I wasn’t super nervous at the moment. I was able to get into the right head space.

Thanks to Athletes Unlimited’s scoring system, Denham was able to leap from 35th on the overall points leaderboard to 15th, going from 634 points to 874. Team Jaquish took all 70 innings points and got 50 for the victory. In addition to her in-game stats points, Denham was voted the game’s MVP 1, earning her 60 additional points.

The key for her was keeping the ball on the ground and getting quick outs. She got 11 outs on the ground, including an inning-ending double-play in the third.

“I’m a ground ball pitcher,” she said. “That’s the name of my game. If I execute that well, that’s usually what happens. That’s a good thing.”

Team Jaquish finally broke through against Taylor McQuillin (3-1) to open the scoring in the bottom of the fourth inning for 40 innings points. Tori Vidales led off with a line-drive home run that barely cleared the wall in left field.

“No, not at all, actually,” Vidales said when asked if she thought the ball had enough height to get out. “I thought it was going to hit the wall so hard that I was not even going to make it to first base before Bubba (Nickles) threw it in. I was very happy it went over.”

While Denham was an 11th-round draft pick for this weekend, Vidales went in the first round (third overall pick), even after she missed a couple of days last weekend. For her efforts Saturday, she picked up 40 points for being MVP 2.

“I was really surprised,” she said. “Last week, I missed two games. I was only going to be there for the Monday game, so I got picked a lot later in the draft. This week coming back, I didn’t know what to expect. I had been going a little bit higher just because of my bat. I was really shocked when I got the invite for the breakout room. I’m just glad to be on Team Orange. We have a great team put together and a lot of chemistry.

Team Jaquish scored once more in the fourth. After Caleigh Clifton struck out, Megan Wiggins doubled to the gap in right-center. Nadia Taylor followed immediately with an RBI double to left.

“I would say really to just kind of pace,” Taylor said of her approach at the plate. “Alyssa has been kind of encouraging me. So has Tori, just in our BP sessions. ‘Hey, stay calm and have fun.’ So what I really did was, after my first at-bat, settle down and really just play the game pitch to pitch.”

“We’re the Lions,” Taylor said. “So we’re hungry and want to eat. We have the Lion King theme. Everybody’s bought in, and we love it. We’re having a lot of fun. The team chemistry I would say, is unmatched.”