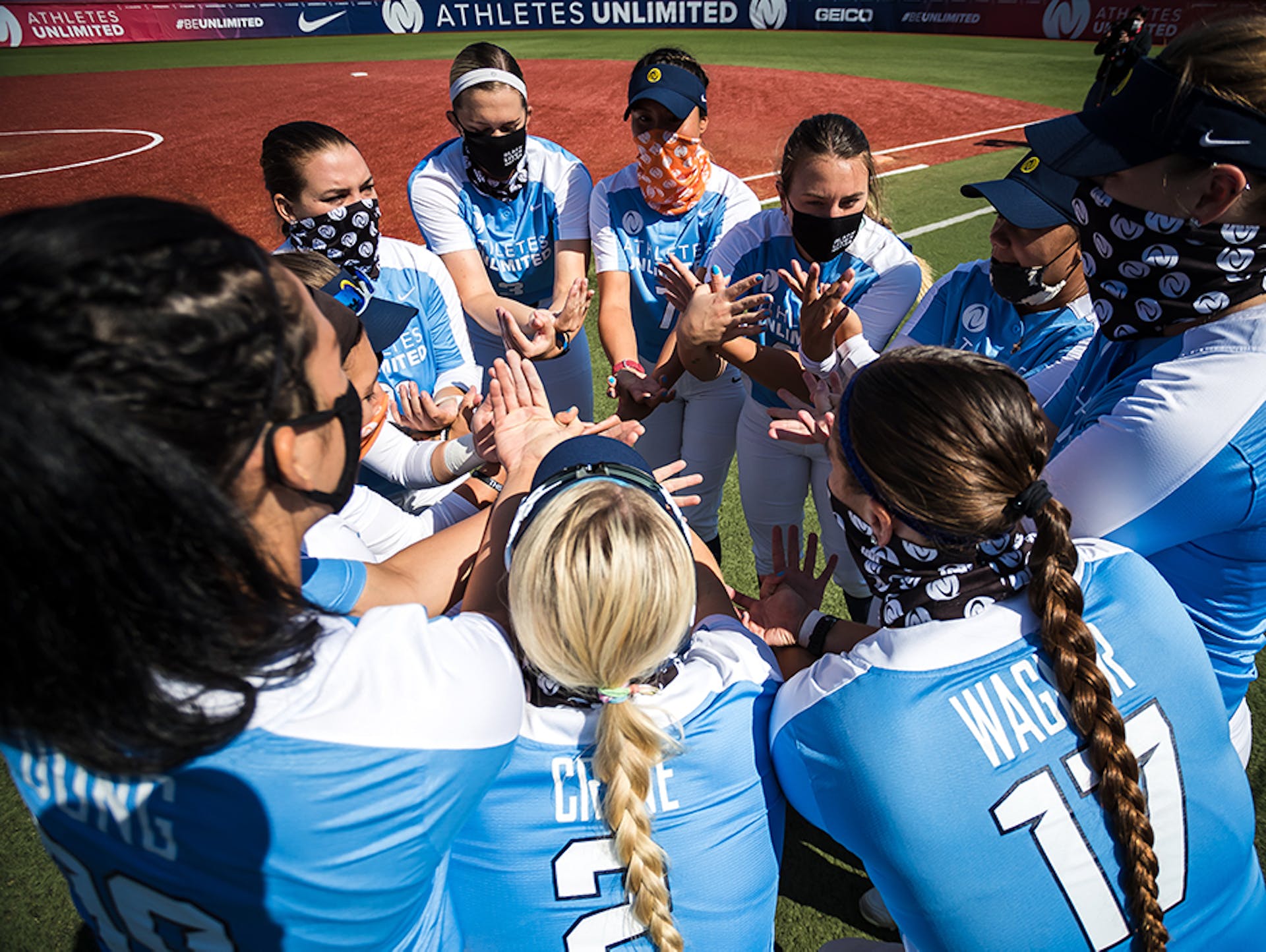 If we’re finding out one thing about Athletes Unlimited Softball, it’s that what happens on Draft Tuesday stays with us through the following weekend.

It’s becoming apparent that Hayward put on a drafting clinic when she put together her team for this weekend in Rosemont. And success comes not only from the high-round picks.

Then on Sunday, Hayward’s draft acumen was there for all to see in an 8-3 victory over Team Reed.

Hayward put together a power-packed offensive lineup. True to form, the Blue team put five balls over the wall – two by hot-hitting Sahvanna Jaquish, two by Samantha Show and one by Haylie McCleney.

Nobody wins without pitching, though, and Kelly Barnhill provided it with 5.2 innings of three-hit, three-run ball. Barnhill, who was taken by Hayward in the 11th round of last Tuesday’s draft, was perfect until Sam Fischer blooped a single into left-center field to open the bottom of the fifth inning. A double play quickly erased Fischer and then Hayward made a diving catch of captain Janie Reed’s liner to left.

Barnhill began finding her rhythm last weekend, and on Sunday, she was routinely hitting 70 mph, according to the scoreboard.

“I definitely felt more like myself this last weekend,” said Barnhill, who improved to 2-0 for the season. “I felt that I came out and my bullpens this week, I felt really good with all of my pitches. So it all just kind of came together this week. I think one of the main things was just getting ahead on batters, not getting behind, and keeping those runners off base.”

Barnhill’s teammates could not believe their good fortune that she lasted until the 11th round.

“So it’s actually really funny,” said Show, herself an eighth-round pick for this week’s play. “Before we got Kelly, we were actually surprised that she was still available. We knew that, one, having a four-pitcher staff is so valuable now, but also the fact that Kelly did throw so well last week and it kind of got overlooked for some strange reason.

“We were so excited to get her and add her to our staff. The fact that Vic is able to use us properly as pitchers to come in or throw innings so we keep the game in our hands is phenomenal.”

McCleney and Jaquish were Hayward’s second- and third-round picks after she drafted pitcher Haylie Wagner in the first round.

Jaquish walked and scored in Sunday’s first inning. She hit a two-run homer in a three-run fifth inning and then connected on a solo shot in the seventh. Show followed immediately with her second of the game to break open a 5-3 lead at the time. Jaquish hit two home runs Saturday.

“Just trying to do the same thing – be aggressive on the pitches I should hit,” she said. “That’s it.”

Jaquish earned MVP 1 honors and 60 extra points on top of the 90 stat points and 110 innings and victory points. Barnhill earned another 40 for MVP 2 honors, and McCleney added 20 extra for being the game’s third MVP choice.

For Team Reed, Amanda Chidester picked up 40 stat points for her three-run homer in the sixth inning that rallied her team from a 5-0 deficit.

As far as being the bargain of the draft, Barnhill seemed to be taking it all in stride.

“I was a little bit surprised that I went that low this week because I thought I had a pretty good performance last week,” she said. “Sometimes it’s not reflected on your performance. Sometimes teams can get people later just based upon what other people need and how people drafted their ‘unlimited’ (category), filling certain positions.

“At the end of the day, you just have to know your value and know your worth and just take it like that.”

So captains for Week 5 coming up: Take heed.