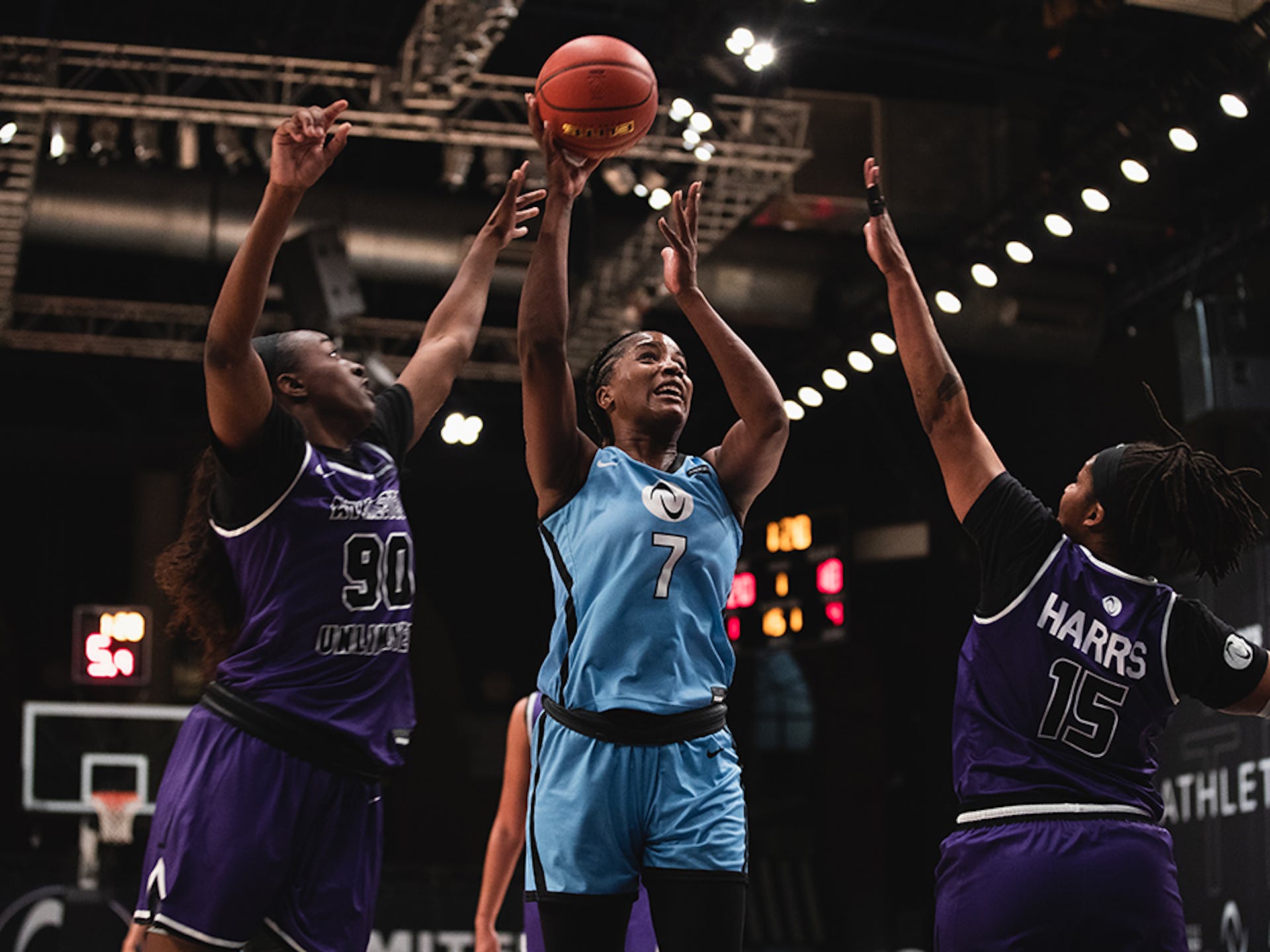 LAS VEGAS — It was bound to happen, at some point during 30 games.

In the 11th edition of Athletes Unlimited Basketball, Team Harrison served the first blowout of the season, a 100-74 rout of Team Russell on Saturday night at Athletes Unlimited Arena at Sport Center of Las Vegas. It was the largest margin of victory this season.

Five players scored in double figures for Team Harrison, led by Jantel Lavender and Odyssey Sims, who each scored 17. Lavender, whose tally was a season-high, added eight rebounds, while Sims grabbed six boards. Dominique Wilson had 15 points, Courtney Williams contributed with 14 and Akela Maize chipped in with 11. Williams also had a season-high 10 assists to post her first double-double of the season

Captain Isabelle Harrison, the league’s leading scorer at 22.6 points per game entering Saturday’s action, was limited to a season-low four points on 2 of 4 shooting from the field, which was fine considering her players stepped up.

“I was telling Izzy she was the coach for tonight instead of a player,” Wilson said. “It’s draining on (captains). I couldn’t imagine trying to play and to sub people in. I think Izzy just stepped back and just let everybody play.”

For Burkholder, she suffered through four straight losses from Week 1 through Wednesday and was ecstatic to have consecutive wins after Team Harrison’s win over Natasha Cloud’s squad Friday.

“(Friday) just had our momentum going for this game and we wanted to finish the week off strong,” said Burkholder, whose nine points were a season-high and came in the second quarter.

Team Russell was led by captain Mercedes Russell, who had 20 points and eight rebounds. Sydney Colson had 14 points and five assists, while Rebecca Harris and MeMe Jackson each had 10 points.

Team Russell lost all three of its games this week and became the second team to go winless in a single week.

“We came out with what we had, we were down to eight, we came out and we played as hard as we could,” Russell said. “We came up short, which is alright. It’s obviously the third game this week, bodies are tired, mentally we’re tired, but I think we came out and we still competed… for a few quarters.”

Team Russell opened the game with a 10-5 run thanks to a pair of 3s by Jackson, but Team Harrison quickly responded with a 9-0 run, sparked by Lavender. From there neither team ever led by more than four points the rest of the quarter, as they traded buckets down the stretch. Russell had eight of her team’s final 12 points of the quarter, which saw her squad shoot 55.6% (10 of 18) from the floor. Team Harrison hit 9 of 18 (50.0%) from the field in the opening stanza.

Team Russell did its best to make a run at Team Harrison in the second quarter, creeping ahead to a 30-28 lead after opening the period on an 8-4 run. But it was quite apparent who would dominate the rest of the way, as Burkholder scored Team Harrison’s next seven points, igniting a first-half ending 26-6 run. Team Harrison shot the lights out in the second quarter, hitting 11 of 16 (68.8%), and that was with a measly 1 for 2 showing from 3-point range. On the flipside, Team Russell struggled from the field, hitting 6 of 19 (31.6%) in the middle frame.

Williams, who missed Week 1, joins guards Natasha Cloud and Odyssey Sims as the only players to dish out 10 or more assists in a game this season. … Sims has scored in double digits in all six games she’s played.

Preview: The final battle for the top spots on the leaderboard begins