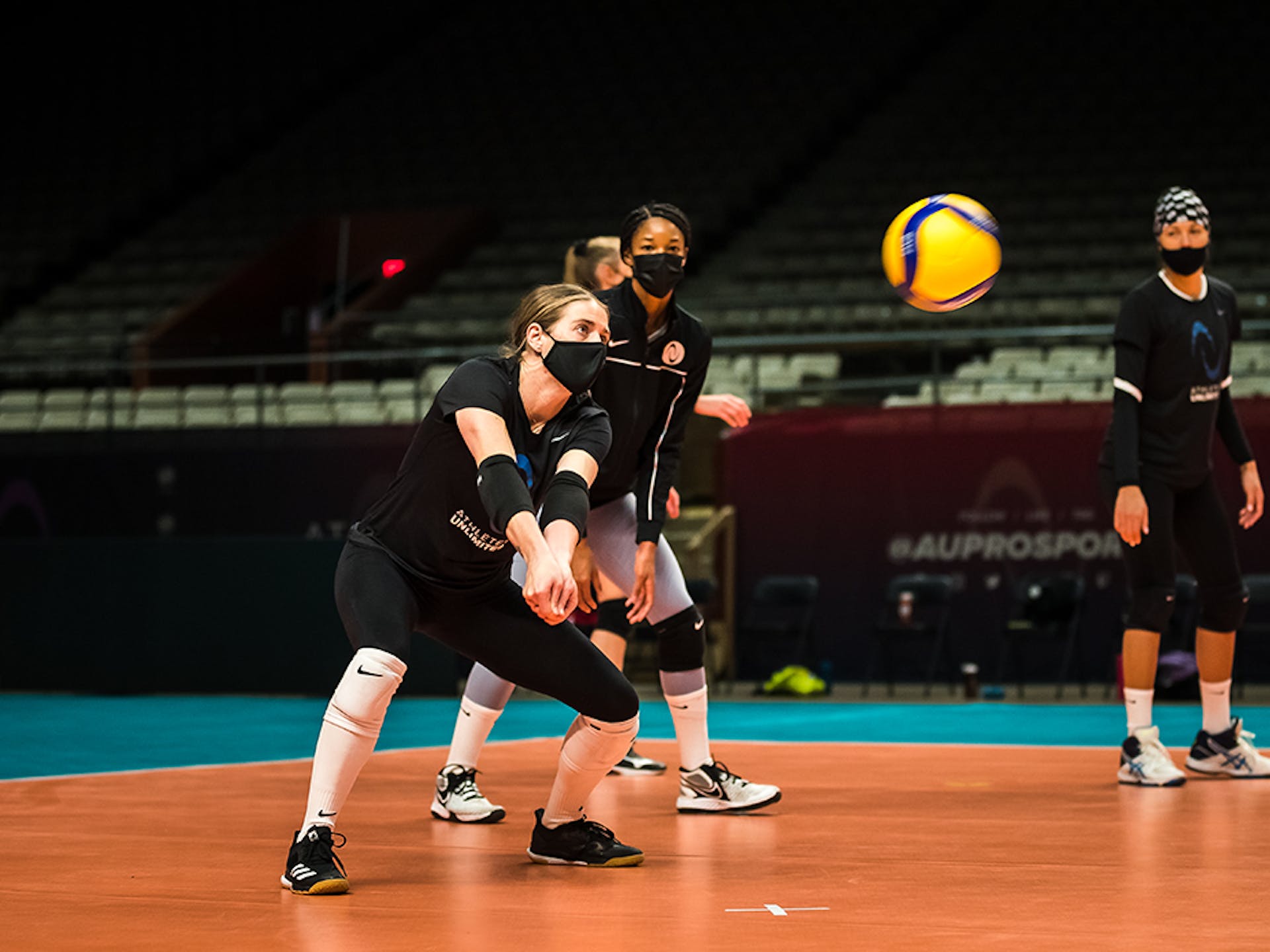 How do you create a five-week volleyball league where numerous games could turn into five set matches while ensuring that individual players have an equal opportunity to score their own “individual” points.

The answer? You don’t.

Instead, you create a volleyball league that redefines the rules for how a match is won while keeping the other fundamental volleyball rules in place.

That’s what Athletes Unlimited has done with the help of Kristen Tupac, a veteran libero. Tupac graduated from Iowa State in 2014, played professionally in Switzerland, and now has started her own volleyball recruiting company.

With her experience, Tupac was chosen to be on the Players Executive Committee (PEC) with the main goal of working in conjunction with the scoring and data team to develop the individual point system and communicating their progress to the other players in the league.

In Athlete Unlimited, individual players can earn points based on the sets and matches their team wins each week and their individual performance. At the end of each week, the four players with the most points become the new team captains. They pick their teammates during the Weekly Draft for the following week and the cycle begins again.

Tupac knew that the point system the league developed would have to encompass three main objectives: simplicity, accuracy, and parity of opportunity.

The first two objectives seem easy enough to reach in a point system. The system should be simple and transparent for fans and players to understand and of course, it must be accurate. Yet, the objective for “parity of opportunity” proved to be a much larger challenge for the team to conquer.

Tupac has a background in volleyball statistics from years of playing and being hyper-focused on her own. She’s also gained a deeper knowledge of stats from working as a coach alongside her husband, Jesse Tupac. When they first heard that Athletes Unlimited was going to be running a reward point system for individual players along with the traditional scored points in a set, the Tupacs knew they needed to implement the data system they’d been working with, known as “Data Volley.”

“I just remember talking to Jesse about it and he immediately brought up Joe Trinsey and his work with the USA national team and how they value different skills in volleyball. So Jesse and I spent a lot of time talking about this, how’d we want to do it, and what’s the best way to make sure that every player, their position, and their skill set is valued at the same level across the board,” she said.

Tupac described Data Volley as the process of adding a point value to each touch a player makes. After a player passes, sets, or hits the ball, a statistical value is attributed to that player based on the quality of the skillset displayed.

Although Tupac is the liaison between the scoring and data team and the rest of the players, she notes that Chris McGown, the Director of Volleyball, was far more hands-on in the simulation process than she was.

McGown said that his team tried out multiple different scoring systems as they ran simulations. The other forerunner involved ranking players on a spectrum of one to 10. The scoring would work similarly to how gymnasts earn a score after a routine. Yet, that system was ultimately scrapped because it didn’t serve the main purpose of providing simplicity and transparency for fans.

Instead, McGown, Tupac, and the rest of the team opted to pick the model that Athletes Unlimited ultimately adopted – rewarding or subtracting points almost any time a player touches the ball.

From there, the main challenge was determining how many points should be awarded for a good play or deducted for an error.

To decide on the point value of each skill, the team scoured through 15,000 records that covered professional women’s volleyball. Each record represented an individual athlete playing in a match.

They then compiled all of the data from each player, organized it by position and normalized it to three sets (since that’s how many sets Athletes Unlimited will be playing every match).

After looking at the data for each position, McGown and his team had a skyscraper view of the numbers that players would put on the board when they were having an amazing, average, or poor performance.

For example, “When an outside hitter plays a match, here’s the range of kills we could expect her to have and here’s the number of good passes and the range that we’d expect her to dig balls. From there, we could say, ‘Here’s the 80th percentile. This is where the top performers are having a great night,’” McGown said. “‘Here’s the 20th percentile where poor performers are having a bad night.’ From there, we could work the curve [in the simulations] to see different point totals for different positions based on performance.

When the team came to a conclusion on how many points should be granted for each skill, they presented the findings to Tupac. She analyzed the data for countless hours before presenting the white paper to the rest of the PEC.

“Once we all knew we were on to something, it was just a matter of manipulating the numbers and making sure that everyone had the right amount of clarity,” Tupac said.

Tupac realized that the final point breakdown was the best one for the league based on the data she’d seen with the simulations and the knowledge that this system could provide parity of opportunity to every single player – the largest challenge Tupac, McGown, and the rest of the team had faced.

“You’d expect outsides to always be leading in points based on them doing the largest number of skills. But after they manipulated the points, it turns out that outsides also have the widest range in terms of positives to negatives,” Tupac said. “They can have the greatest performance, but they can also have a ton of negatives or errors. Liberos on the other hand don’t have a ton of negative point opportunities, so we’re probably going to be more in the middle, but we also have the chance of being at the top of the leaderboard.” The scoring system was initially met with hesitation by players when Tupac presented it. However, that hesitation turned to approval when Tupac explained how the final point system had been reached.

“Immediately I think people were like ‘Oh, minus 12 [for an error]? That’s insane!’ But essentially we had dedicated half points for the simulations, so we had to do a multiplier. It makes the passing and setting errors look crazy, but that’ll be easier for fans to follow.”

Despite possibly losing a large amount of points for an error, Tupac said she feels like a weight has been lifted off her shoulders as she contemplates the new style of play.

“For me, as a person who was always stat oriented, but also just like most athletes who are perfectionists, it’s cool to simplify the game in a way,” Tupac stated. “As a passer, when I’m facing a really tough server, I’m going to focus less on getting a ‘perfect’ pass because that sometimes results in an error when facing that tough server. Instead, I’m just going to think, ‘Let’s keep this ball off the ground and do what I can to put it high in the air.’

“I’ve changed my mindset some as I’ve been training. It’s now about doing what I can to help the team while avoiding that 12 point error. At the same time, avoiding a minus 12 error is helping the team,” she commented.

Tupac doesn’t believe that the possible loss of points for an error will make players more timid.

“I think it’s going to make people better. It’s going to force each person to think about how they can score and be creative with their ability to score and their own skills.”