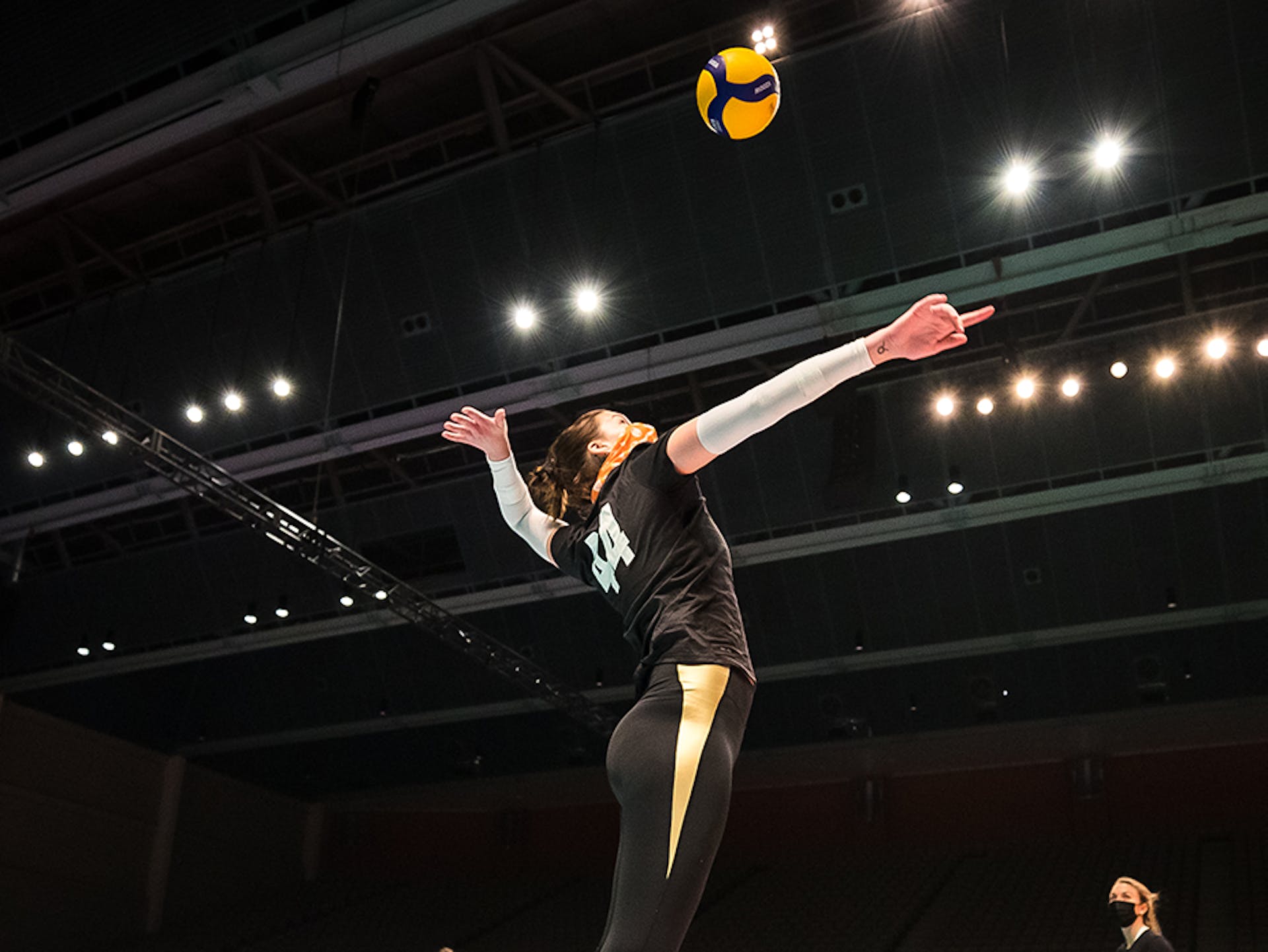 This glossary explains the broad terms associated with Athletes Unlimited Volleyball. It also moves through the “ideal” sequence of a volleyball play (also known as a rally).

Set – each individual game within the overall match.

How to win a set – must reach 25 points to win. The winning team always has to win by a margin of 2 points, so the score must be at least 25-23 for a team to win. However, there isn’t a point cap in each set, so if the teams continue to exchange points the score could be higher than the set ending at 25 points. For example, the final score could be 29-27 or 32-30.

How to win a match – in the Athletes Unlimited league, the team with the most points at the end of all three sets will win. If one team wins two sets, they could lose the match if they score less points overall than their opponents’. For example, Team A wins the first two sets 25-23, 25-22, while Team B wins the third set 10-25. In this example, Team B outscored Team A 70-60, therefore Team B would receive the win points for the overall game.

For a full overview of the points system, click here.

Number of touches – each team is allowed to touch the ball three times before the ball must go back over the net. This doesn’t include a “block touch”

In/ out – if a ball lands on the line, it’s considered in.

Sequence Of A Rally

Serve – from behind the end-line, the serving player has to hit the ball over the net.

The serve receivers can consist of both front and back row players.

Serve receive pass – after the serve, the receiving side will attempt to pass the ball to their setter.

Some players tend to only play in the back row and are considered “passing specialists.”

DS – short for “defensive specialist”, this player usually subs in for a hitter and then plays in the back row. Once enough rotations go by that the DS would rotate into the front row, the hitter will sub back in.

Tip: The libero will be wearing a different colored jersey.

The “setter” is often referred to as the “quarterback” on the volleyball court. They’re responsible for calling offensive plays that direct their different hitters to the correct location. The setter is then responsible for locating their hitters and passing them a “hittable” ball.

Set – usually a movement where the player receives the ball above their head. However, a set can also occur as an underhand passing movement.

Assist – a player earns an “assist” when they set the ball to a hitter and the hitter earns a kill.

Attack – any contact with the ball going over the net with an attempt to score a point.

Hit – any aggressive attack of the ball that involves an overhand arm swing.

Kill –  occurs when a player attacks the ball and it lands in or a defensive player makes an error. If a second player on the defensive side never gains control of the ball, then the attack will be considered a kill.

Back row attack – hitters can also attack a ball if they’re in the back row if they jump from behind the 10 ft line.

Defensive Side After An Attack

If the attacking side doesn’t earn a kill, then the play will continue.

Dig – occurs when a player passes the attack and manages to successfully keep the ball in play. A team cannot have more digs than the other team has in attack attempts.

Block – occurs when a front row player prevents the attack from coming over the net.

The sequence described above will continue until one team makes an error or a team manages to get a kill.