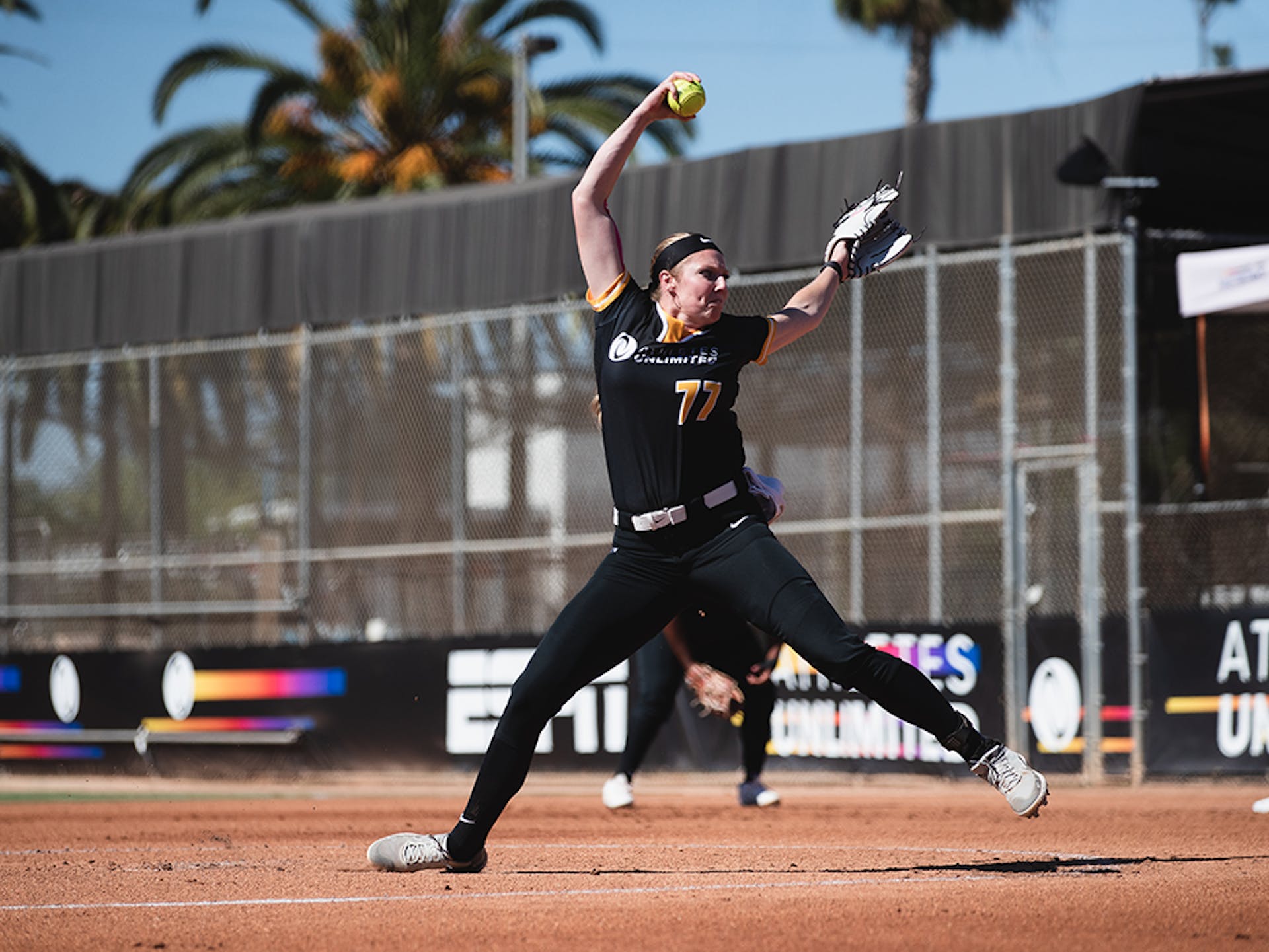 Out of failure can come great success, or at least another shot at success.

A year ago in June, the former University of Alabama standout was in Rosemont, Ill. to take part in open tryouts for Season 2 of Athletes Unlimited Softball.

Things didn’t go as planned, and Littlejohn Watkins didn’t earn a contract. To add insult to injury, not only did rainstorms force the open tryouts inside to the dome, but then tornado sirens forced players off the indoor field and into shelter during the middle of a scrimmage.

“Oh, my God, that was horrible,” Littlejohn Watkins said with a laugh. “Honestly, I’m not going to say that affected me and that was the reason I didn’t (perform well at the) tryout because even more than that, I knew I wasn’t ready.”

Fast-forward to June 2022 and the Athletes Unlimited AUX Softball games in San Diego.

Let’s just say that Littlejohn Watkins was ready. In 27 innings pitched, the curveball specialist went 1-0 with a 2.82 ERA and 15 strikeouts. She was all set to try out for Season 3 of AU softball in Rosemont, but her performance in AUX earned her a spot, making another tryout unnecessary.

Making it more special was the way she found out she had made it.

“I texted Cheri (Kempf, AU’s Director of Sport, Softball) in a group message and was like, ‘Just so you know, I do want to try out again,’” she said. “Luckily, my performance was decent. I thought it was good. It was well enough to be stuck in their minds.

“During the middle of the second series, warming up for a game, we do this thing where we get together and somebody in the group asks a question and everybody in the group answers it. I don’t even remember what the question was that day, but at the end, (outfielder) Victoria Hayward was like, ‘Hey, guys, we have an announcement. For this person, based on how their performance has been, they’ve been great, they’re great teammates, and Sydney, would you like to join us for Season 3?’ I was like, ‘Oh!’ I cried a little. It was an amazing, full-circle moment. I was really happy, but it was like the little girl inside me was super happy because failing the first time and knowing I wasn’t ready, I was OK with that.” With the 27-year-old Littlejohn Watkins, AU will be getting one of the most decorated pitchers in the history of the University of Alabama – with two perfect games to her credit – as well as the quintessential small-town-girl-makes-good story. A native of Rusk, Texas, in the eastern part of the Lone Star State, Littlejohn Watkins didn’t take up pitching until she was 12.

“Everybody knows this, so I’m just going to go out and say it: I am very weird and I’m awkward and I embrace every part of that with me,” she said. “I had been in cheerleading. I had been doing all these other activities. I’m not going to say I wasn’t good at them. In cheerleading, I got to where I was taller than everybody else. It was just awkward.

“A lot of my friends growing up, the friend group I was a part of, played softball. I told my parents, ‘I want to play. I want to be social.’ I lived out in the boonies. I didn’t have a neighborhood that I lived in that I could go play with the kids. I was out jumping hay bales out in the pasture. That was my way of entertainment.”

Littlejohn Watkins admits she was not an ace pitcher from the get-go.

“I wanted something to be able to be with my friends and hang out and just have fun,” she said. “I fell in love with the game that way, but let me tell you, I was not good. I was the player that happily rode the bench with my little Dr. Pepper and my little wet towel, iced towel around my neck, and I cheered for the team. It was a lot of fun. I would play right field for two innings because that was the rule to get everybody to play at that time.

“And it was fine. I was lanky and awkward and I had big hands and big feet. One of the coaches was like, ‘You know what, Sydney? You should try pitching.’ I went home and told my parents I wanted to be a pitcher. They laughed at me. They did not take me seriously. God bless ‘em. I understand why they did it because it’s quite the investment. But then I kept hounding them about it.”

There were pitching lessons and three-hour one-way trips on the weekend for those lessons and practices. Littlejohn Watkins’ goal at first was to make the varsity high school team. She did that. And then she was good enough for Alabama, where she hit the jackpot, starring in the circle and meeting her future husband, Alex Watkins.

Sydney has an undergrad degree in exercise science and two master’s degrees, one in nutrition sciences and one in sports business management.

Today, Sydney and Alex work together at the University of Florida – Alex as a strength and conditioning coach for the Gators football team and Sydney as a registered dietitian.

BACK IN THE CIRCLE

“It was a lot of things,” she said. “First of all, the timing of it. It came out during COVID, and we were all at home sitting and watching. I kept telling my husband, ‘Man, I really want to play again.’ My body was finally healthy. I had a hip surgery in 2019 so I felt I was finally in a better place from that. And I was also in a place where I graduated with my second master’s in December of 2021.

“A lot of these girls are girls that I’ve played against. Knowing that they’re still out there and that they’re still competing was definitely what drew me to it. I think it was more of a thing where, ‘I got the itch, and I need to scratch it.’ So that way, whenever I am older and not able to play anymore, and if my husband and I decide to have kids, I can tell them I gave everything I had. Everything in me tells me that one day I’m going to have daughters. I don’t know why. If I have sons, great, but I have a feeling I’m going to have daughters since my sister has boys. I have a feeling I’m going to be the one to have the girls.

“I want to be able to talk the talk and walk the walk like, ‘Hey, I did do this. I want you guys to know that I fought for female athletics and female sports and I did my best to make a difference. So that way, you have a better opportunity.’ I want to leave my legacy with the game, as well.”

AUX Softball was a big boost for Littlejohn Watkins.

“I thought it was great,” she said. “It was definitely a grind … Playing that many games that quickly, I haven’t done that in a very long time. But I will say I was very proud of how my body held up. And I was thankful for a lot of the resources that the support staff gave us because that’s what kept me together.

“It was such an amazing experience being able to be out there … A lot of these girls I’ve played against. But I haven’t played with many of them. It was nice to sometimes be on the same team as some of those girls and getting to see how they are as people.”

Now with Season 3 of Athletes Unlimited Softball at hand, Sydney Littlejohn Watkins is looking to play again, with a fresh sense of perspective and for the love of the game.

“Personal goals, I want to make a decent showing,” she said. “I’m trying to embrace not putting pressure on myself. The thing with these hitters, and I learned it very quickly, is you may have a good outing and you get your confidence up and that’s great. But the next game, you could have six runs scored against you so quickly you can’t even blink. And the next inning, you’re fine.

“My goal with that is to very much have a short-term memory. Being around all these great pitchers, I want to learn – still. Being 27 and pitching, everybody is like, ‘What do you mean  you want to learn?’ But I still want to learn how to set up hitters and how different people do it and perfect some of my pitches as I continue to go through this season. I’m not the same exact pitcher you see every week.”

And if there’s a folksy analogy to expand on that point, Littlejohn Watkins is there for you with it.

“Obviously, everybody knows with me they’re getting a curveball,” she said. “I am Raising Cane’s Chicken. At Raising Cane’s you know you’re going to get good chicken. With me, if you’re a hitter, you know I’m going to throw you a curveball. I’m not Cheesecake Factory, where you have all these different pitch selections. I am throwing you a curveball. It may be perfecting my drop curves so that way I’m breaking two planes against the batters. Just adding to my arsenal each week is something I would like to do.”

In the bigger picture and for the long term, Littlejohn Watkins would like to inspire girls and young women with the lessons of her own story.

“Honestly, as cheesy as it sounds, I say bet on yourself,” she said. “Even with me and my story, especially after tryouts last year, everybody was like, ‘OK, Sydney, it’s time to hang them up. You don’t have it anymore.’ And I’m like, ‘No. I know deep inside me that I still have it.’ The only other person that trusted me with that was my husband. Of course I’m very grateful for him. I know what I am capable of, and I know whenever I’m at my limit. And that’s OK. Once you know your limits, you’re limitless.

“Trusting in yourself and betting on yourself is the best thing you can do … Whatever happens, good or bad, you got to be happy with yourself for it. You got to 100 percent because even if you fail, you’re not leaving any doubt with yourself.”