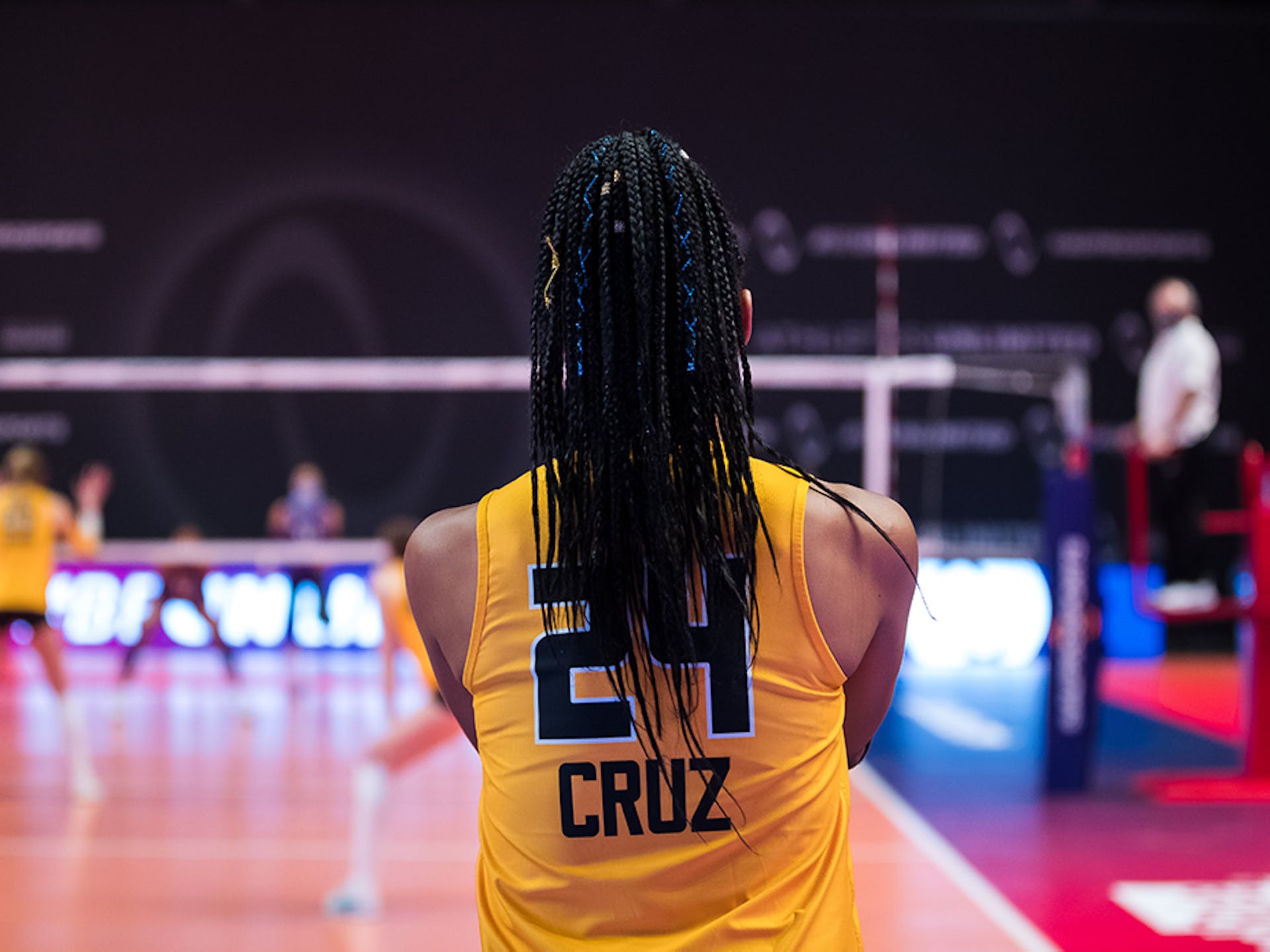 The first Team Gold captain in Athletes Unlimited Volleyball history, Aury Cruz is continuing her career in the United States. The Puerto Rican native earned her spot as the gold team’s leader for opening weekend, earning the most points throughout the preseason scrimmages.

Prior to Athletes Unlimited, Cruz has had a successful career around the world, playing professional volleyball in Italy, Spain, South Korea, Turkey, Azerbaijan, and Puerto Rico. She was born in the Bronx, NY, but grew up in Levittown, Toa Baja, Puerto Rico, and returned to the U.S. to play at the University of Florida, where she became a 2002 national runner-up in Florida’s first-ever visit to the NCAA Championship Finals.

But Cruz’s start in volleyball was actually by accident.

Cruz’s sister, Eva, is eight years older than her and was already over 6 feet tall when she was 12 years old. Due to her height, she began playing volleyball and was eventually recruited to the Puerto Rican National Team. Since her family was taking her sister to practice, Cruz tagged along.

“Instead of me running around on the playground, they gave me a ball and then I started playing,” Cruz said.

Cruz continued to play volleyball, along with basketball and track, until she was 14. Then the Puerto Rican National Volleyball Team asked her to join them. Cruz made several sacrifices to find time for the national team and stopped playing basketball competitively.

“It got to a point that, for me, I was kind of frustrated because I couldn’t have a life with my friends. I think I never had a ‘youth’ because I was always with the older girls playing a sport,” Cruz said. “Compared to now, there’s no off. You play sports the whole year around, so I never had a break.”

Cruz’s mom had initial hesitations about letting her join the national team and travel to play against athletes who were much older than her, but she ultimately decided to allow her to play because her sister would be by her side. But, despite being siblings, the two sisters gave each other space at the gym.

“I never grew up on the national team with my sister being like family. We always respected each other as teammates,” Cruz said. “I think that helped me a lot in my career because it made me more independent.”

Cruz continued to play with the national team as she entered her senior year of high school. She’d been looking at colleges in the U.S. for several years, and had finally narrowed it down to the University of Nebraska and the University of Florida.

“My mom didn’t love the thought of me going to Nebraska because it was so far. She was like, ‘How many flights does it take to get there?’ and, ‘Aury, you live on an island. You don’t know about cold weather,’” Cruz said.

Ultimately Cruz decided to take her volleyball career to Florida – not because it was warmer – but because she felt more comfortable there academically when she visited the campus. The fact that Florida was closer to home and Cruz already had family members there didn’t hurt either.

“And I was still freezing in Florida,” Cruz joked.

After Florida, Cruz began her professional volleyball career overseas for 15 years while continuing to play for Team Puerto Rico. She helped the team qualify for the 2016 Olympics – their first time to ever do so.

Most recently, Cruz has been playing in Puerto Rico because she was ready to be closer to her family.

“I came back last year. I was playing in Italy, but then the team broke, so I decided this was the best moment to stay at home. And then the pandemic started,” Cruz said.

As the new pro volleyball season rolled around, Cruz’s agent began to talk to her about the possibility of returning overseas, but she was hesitant to play since she’d been playing far away from her family for so long and because of the ongoing pandemic.

“When I first heard about the league in the United States, I was like, ‘Oh, that’s great that they’ll finally have a league. I don’t know why it took them so long,’” Cruz said. “I always took it as it was only going to be for American players. But then I was like, ‘Wait, I’m American.’ And then suddenly Jordan [Larson] was calling me.”

Initially, Cruz was unsure how she’d be helping the league when Larson told her that she wanted to introduce her to several people associated with Athletes Unlimited.

“All the time I was thinking, ‘Well maybe they need help with this league, not as a player, but as a scout or an agent, so I’ll listen,’” Cruz said.

When Athletes Unlimited’s owner, Jon Patricof, asked Cruz to be a player, Cruz knew she wanted to be involved with the league immediately.

“Not only for North America, but for around the world, it’s a different kind of game. For me, I think it’s more difficult and more competitive because you have to be 100% all the time. You always have to bring your A-game because you want to win. And it’s not just about winning as a team, but it’s also about winning as an individual. The better you do, the further you earn,” Cruz said.

“It’s a great opportunity to help out and help this league to grow. It’s also a great way to introduce young girls to show that there’s something more and something bigger outside of college volleyball.”