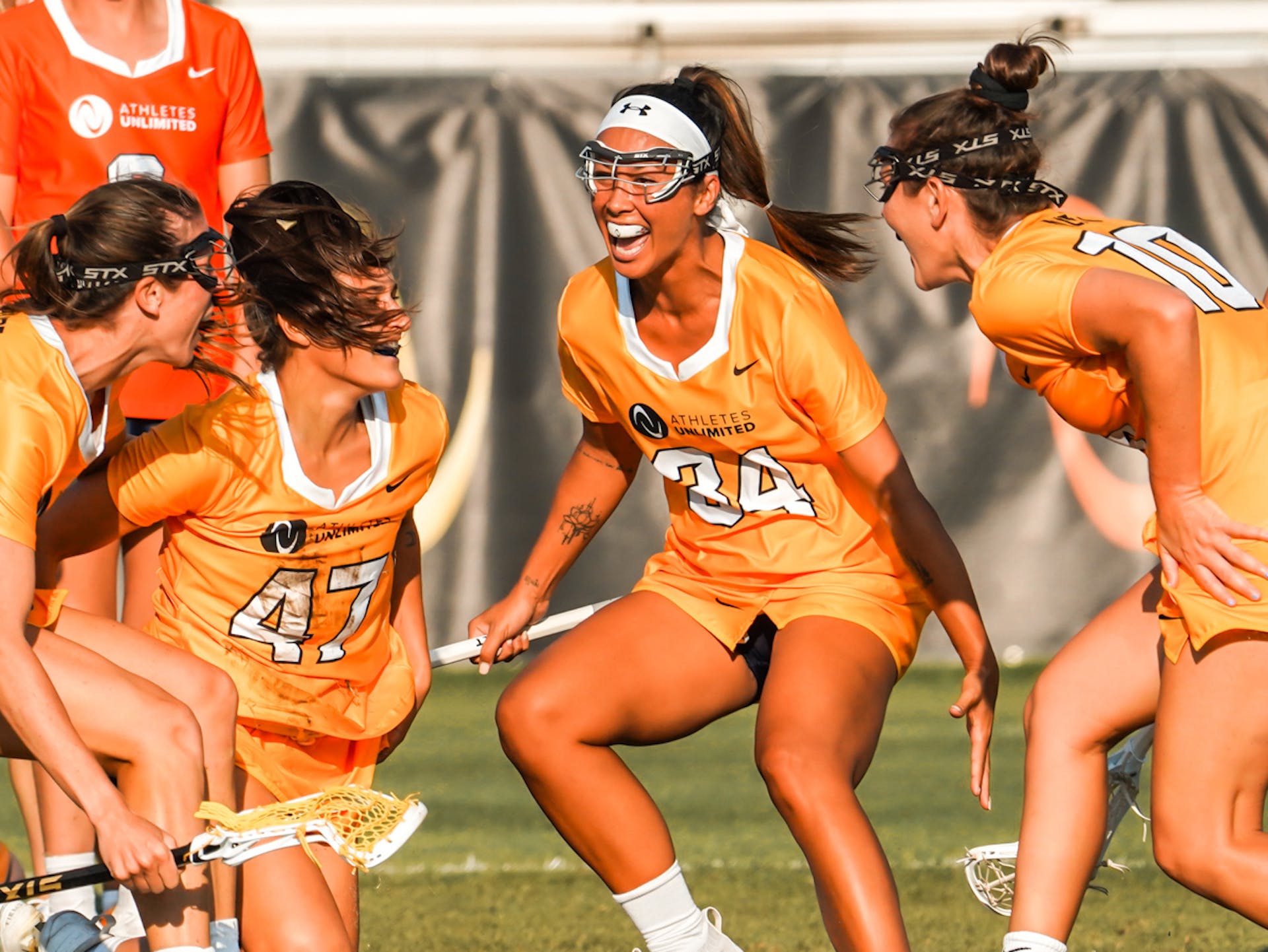 Team Wood and Team Treanor kicked off Week 2 of Athletes Unlimited Lacrosse on Friday evening with a high-scoring, back-and-forth game. Neither team could break away from the other, as each offensive run was quickly countered. Alex Aust was the hero for Team Wood in her first game with Athletes Unlimited, scoring a single-game record five goals, including the game winner in the final minute.

Here’s the recap of the thrilling start to Week 2:

Battle of the Kaylas 🥍

Both teams started the game with a strong defensive showing. The gold team’s locked-in defense forced a shot clock violation, while Team Treanor’s pressure caused Team Wood to turn the ball over multiple times early on.

Taylor Cummings scored the first goal of the game for Team Treanor, just barely inside of the 2-point line.

With just over a minute left in the first quarter, Aust tied up the game in her Athletes Unlimited debut after missing Week 1.

Shortly after, Alyssa Parrella continued Team Wood’s offensive momentum with a slick goal to put her team up 2-1 at the end of the first quarter.

Sweet goal puts Team Wood on top. @AUProSports is off and running in Week 2! pic.twitter.com/1cqJsi37R1

Team Treanor’s offense was on fire to start the second quarter, scoring three goals in under a minute. Captain Kayla Treanor kicked off the rally with a crafty goal to tie up the game at two goals apiece. Mollie Stevens and Katrina Dowd immediately followed with goals of their own, putting Team Treanor up 4-2.

Big save by @BrittanyRead1 and then team @kaylatreanor comes down and ties it!! sko!! @AUProSports really sick tie game on @CBSSports right now!! #lax

Team Wood’s defense was finally able to slow down Team Treanor late in the second quarter. Haley Hicklen made two straight saves to halt their opponent’s scoring, and they were able to force multiple turnovers.

Building off the momentum started by their defense, Team Wood’s offense closed out the half on a high note. Cortney Fortunato scored off a nice feed from Kenzie Kent, bringing Team Wood within one. Parrella quickly notched her second goal of the game to tie it at four goals apiece.

The Battle of the Kayla’s is tied 4-4 at the half after two goals from Team @kwooood‘s @AlyssaaParrella and @CortFort15‼️#BeUnlimited // 📺: @CBSSportsNet pic.twitter.com/S9CJdQJrWT

Team Wood wasted no time at the start of the second half. Taylor Vanthof brought Team Wood up 5-4 with a winding, wide-open goal, and shortly after Fortunato and Aust scored their second goals of the game.

Stopping Team Wood’s run of five unanswered goals, Emily Parros flicked the ball inside to the back of the net. Cummings then added to Team Treanor’s comeback to bring her team within one.

Building on her team’s rally, Taylor Hensh tied it up with her second goal of the season.

Despite Team Treanor’s rally, Team Wood didn’t let their foot off the gas. Aust made her presence known with back-to-back goals, putting Team Wood up 9-7. Parrella followed with a diving goal to secure the hat trick.

From the runway to the field ⭐️@AAust10 has FOUR goals in her @AUProSports debut!

With just shy of seven seconds remaining in the third quarter, Parros found the back of the net with a blind behind-the-back shot that undoubtedly will hit the highlight reels. Team Wood led 10-8 with one quarter remaining.

To open the fourth quarter, Taryn Vanthof found Kent to put Team Wood up by three. Cummings quickly answered with a goal for Team Treanor, however, making it a two-goal game.

Parros earned herself a hat trick with just over five minutes left in the game, breaking down Team Wood’s defense. After some great passing by Team Treanor, Stevens tied up the back-and-forth game once again.

Hoping we get at least one shootout this season in @AUProSports. Would be ELECTRIC.

With just 34 seconds left, Aust set an Athletes Unlimited record with her fifth goal of the game to put Team Wood on top 12-11.

A NEW RECORD for the most goals scored in an Athletes Unlimited Lacrosse game‼️#BeUnlimited // 📺: @CBSSportsNet pic.twitter.com/GIibxDVlmb

Treanor had an opportunity to re-tie the game at the very end, Kady Glynn made the game-winning save to secure the 12-11 win for Team Wood.

Team Wood finished the game with 85 win points. Aust’s five goals earned her the top spot on the leaderboard with 198 points overall, including 85 win points, 68 stat points and 45 points for being named MVP 1. Parrella’s hat trick secured her the second spot on the leaderboard with 143 points, and Kent took the third spot with 127 points as well as being named MVP 2. Taylor Cummings’ hat trick earned her the MVP 3 spot.