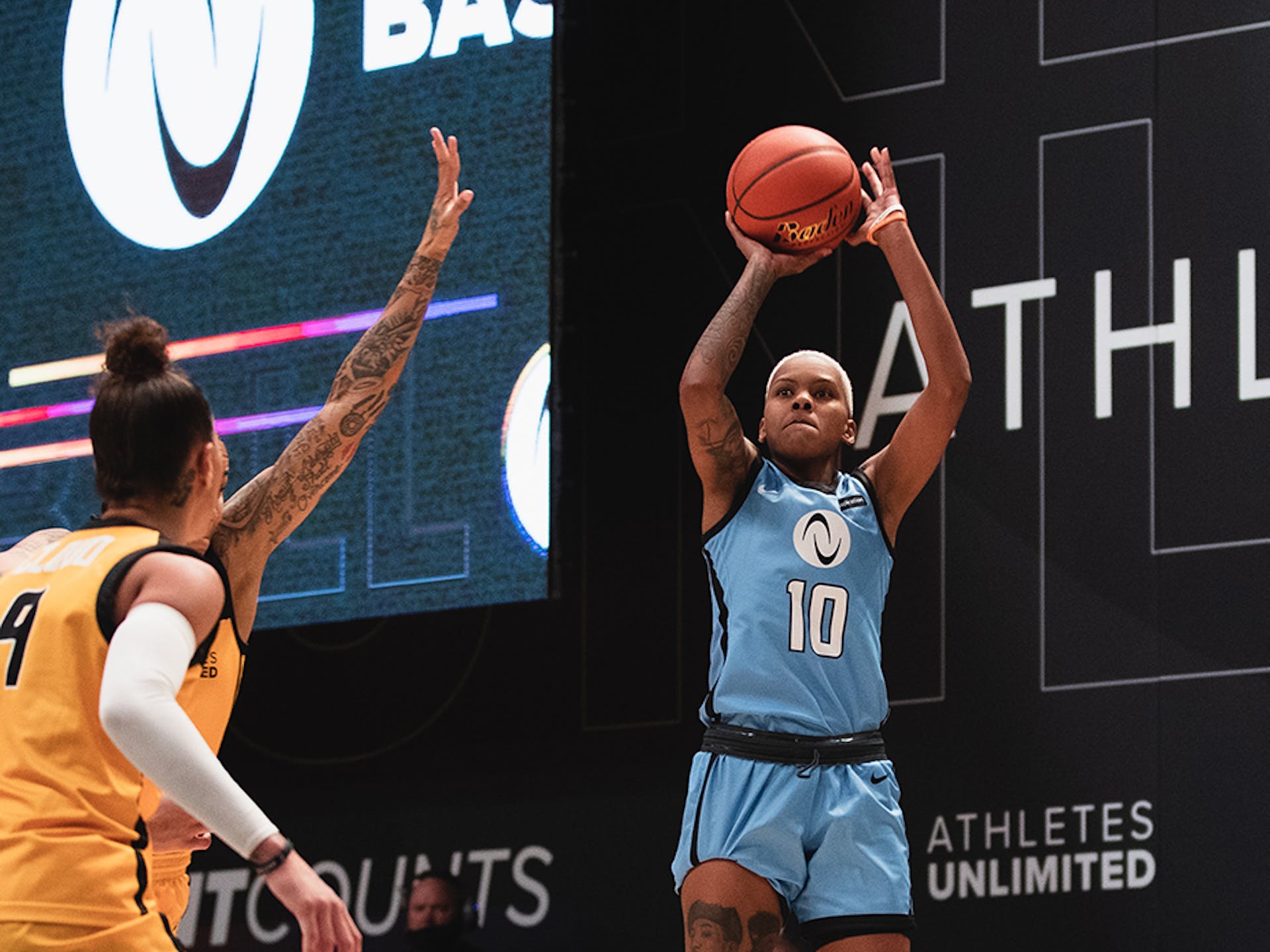 Team captains, and former teammates from Week 1, Natasha Cloud and Isabelle Harrison took to Twitter prior to Friday’s showdown at Athletes Unlimited Arena at Sport Center of Las Vegas with a friendly wager.

“Soooooo let’s make this interesting,” Cloud wrote. “OMG_itsizzyb I win…you take a picture with my jersey after the game. If you for some reason win I’ll do the same. #CaptainsBet.”

Soooooo let’s make this interesting🤔 @OMG_itsizzyb I win…you take a picture with my jersey after the game.

“I knew from the get-go I wasn’t bout to play around in this game,” Harrison said. “I think last game we were trying to find our feet and our rhythm defensively and it took us out of the game. But we knew for this game it was over with.”

Team Harrison erased a 10-point lead early in the fourth quarter and rode the heroics of Williams and Wilson, who combined for 20 points in the final 10 minutes alone.

“I’m so proud of the people that stepped up,” Harrison said. “Courtney coming back from COVID, I’m telling she’s a difference-maker. That’s a huge reason why I wanted her on my squad.”

Team Harrison finished the game hitting 55.9% from the field, the highest single-game field goal percentage by a team this season.

On defense, after seeing Team Cloud hit 41% or better in each of the first three quarters, Team Harrison held its opposition to a mere 38.9% in the fourth quarter, as Cloud’s crew hit 7 of 18 from the floor, including 1 of 6 from 3-point range.

DiJonai Carrington led Team Cloud with 24 points, while Kalani Brown notched her first double-double of the season with 13 points and a season-high 11 rebounds. Cloud finished with 16 points, seven rebounds and seven assists, and Ty Young came off the bench to score a season-high 15 points and grab six rebounds.

“I know Courtney had a fire lit under her just because of being out last week, and you saw that on display today,” Carrington said. “When great players get hot, all you can do is try to make their shots tough. We had some lapses on defense, some missed rotations, missed getting back in transition, but people were making tough shots as well.”

Team Harrison looked strong early on, taking a 14-10 lead while limiting Team Cloud’s 1-2 punch of Cloud and Carrington to just one field goal and four points. But Young then did what she’s been doing her entire career and came off the bench to spark her team by scoring 10 of her team’s next 13 points, while Team Harrison cooled off to score just four points during the run. Team Cloud took the first quarter, 27-21, but it was Team Harrison with the better shooting performance, hitting 50% (9 of 18) from the floor. The difference was at the free-throw line, where Team Cloud hit 6 of 8 and Team Harrison had no attempts.

Whatever Cloud’s message was at halftime worked. After Team Harrison got back-to-back buckets from Harrison and Sims and extended the lead to 50-44, Team Cloud came to life for 12 straight points culminated by Brown’s put-back lay-in. Team Cloud was able to push the lead to 10, opening a 61-51 lead with a 3-pointer by Carrington. Team Cloud won the quarter 27-18 thanks to a 61.1% shooting clip, hitting 11 of 18 while continuing its dominance in the paint. To that point, Team Cloud had outscored Team Harrison in the paint, 36-24.

NOTES: Top-scorer of the night Williams earned 90 additional points from being named MVP 1, tallying 673 points overall. Teammate and captain Harrison was named MVP 2, bringing her total to 550 points after the addition of 60 MVP points. Wilson, who played the most minutes she’s played all season, was named MVP 3. She earned 30 points and finished the night with 340 points.

Philadelphia Eagles cornerback Andre Chachere sat courtside to watch good friend Natasha Cloud. … Team Harrison became the first team wearing blue jerseys to earn a win this season. The blue jerseys had lost the first four games of the season before Friday’s victory. … Williams was a perfect 3 of 3 from 3-point range and became the sixth player to register a 30-point game this season. … Cloud has scored in double digits in all five games she’s played.