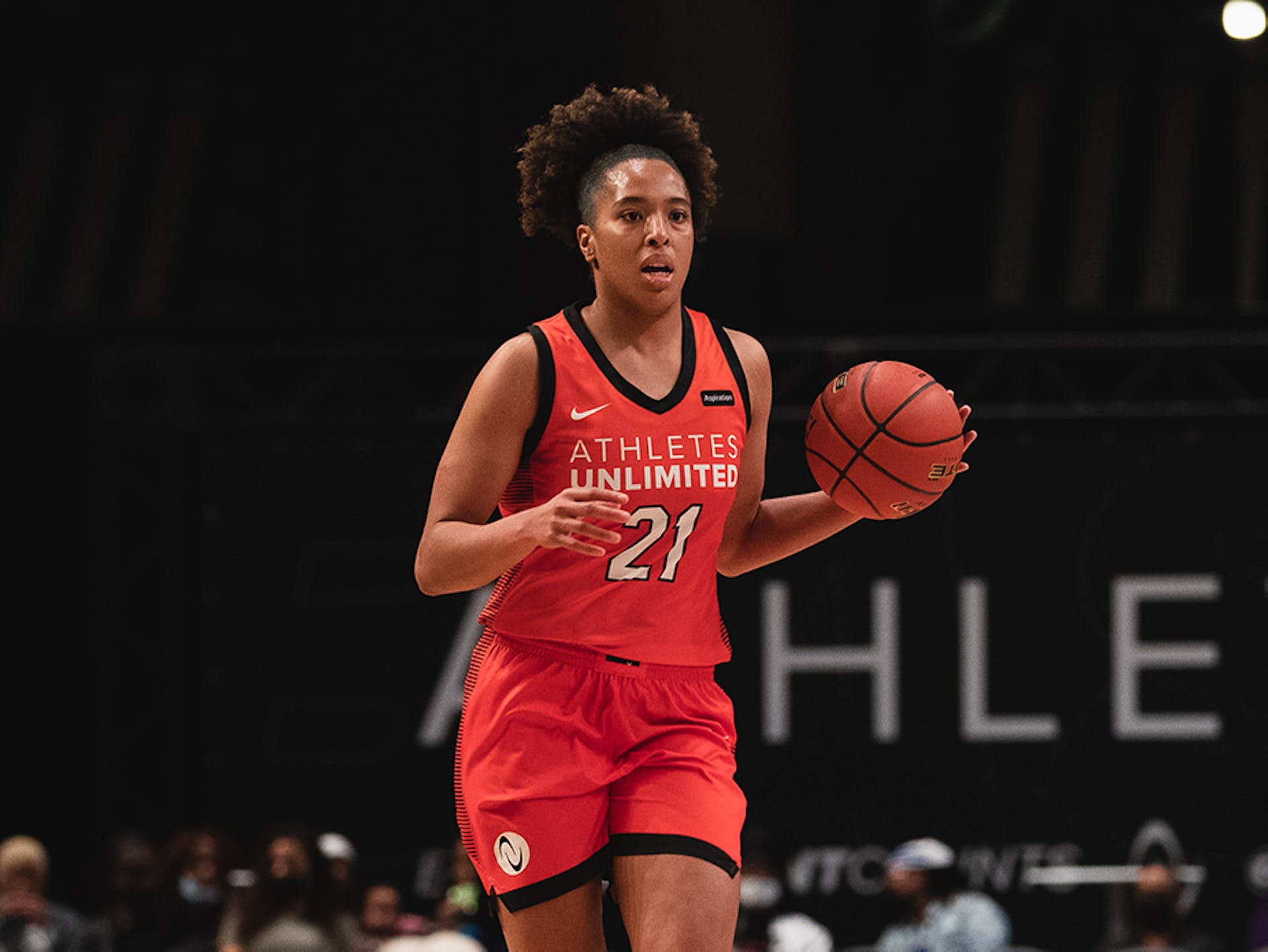 LAS VEGAS — It took one Zoom session for Lexie Brown’s teammates to understand just how important each one of them was to the team.

So on a night Brown scored just nine points – eight less than her season average of 17.0 – the supporting cast stepped up.

Tianna Hawkins set the single-game record with 38 points to lead Team Brown to a 98-85 victory over Team Russell on Friday night at Athletes Unlimited Arena at Sport Center of Las Vegas. Team Brown’s 13-point victory marked the largest win of the season, eclipsing the 11-point triumph by Team Cloud against Team Russell on Feb. 2.

“I was definitely feeling it, my teammates did a good job of finding me in transition, on the pops, the rolls – if it wasn’t for them I wouldn’t have 38,” said Hawkins, who was named MVP 1 of the game and earned 715 points, becoming the first player this season to accrue more than 700. “Lexie knows what she is doing and knew what she was talking about.”

Hawkins becomes the fifth player this season to record a 30-point game and the sixth player to notch back-to-back 20-point efforts. Hawkins’ 17 fourth-quarter points tied the most by a player in a single quarter this season, as Odyssey Sims also notched 17, in the third quarter against Team Mitchell on Jan. 28.

Taj Cole poured in 23 points and dished six assists, while Jessica Kuster also had a season-high with 12 points.

“With Lex, just telling us our first practice together ‘I chose every single one of you for a reason,’ you just feel a lot of confidence when your leader has confidence in you,” Kuster said. “You know to just go out there and get it done.”

In shooting 54.8% from the field, the best shooting performance by a team in Athletes Unlimited Basketball this season, Team Brown moved to 2-0 in Week 2.

“At the end of the day the wins count the most, so I wasn’t really concerned about my points,” said Brown, who also had a season-high 10 rebounds. “Rebounding, assists, steals – they’re kind of what I’m focused on; and winning the games. If you get points that’s kind of an extra thing for me. I think everyone here knows I can score, so when I draw that attention, I need to give the ball up and my teammates came through for me.

“I knew Tianna could shoot, I didn’t know she could shoot like that.”

Team Russell, meanwhile, got an impressive balance down the roster, with six players scoring in double figures, led by captain Mercedes Russell and MeMe Jackson, who each scored 17 points. Nikki Greene had 15 points and 6 rebounds, Kelsey Mitchell scored 13, Sydney Colson chipped in with 11 and Rebecca Harris added 10.

A relatively even first quarter saw both teams use runs to control the tempo at different times, with neither squad leading by more than four points and the lead changing six times. Team Brown found its groove inside the arc, hitting 10 of 15 (67%) from 2-point range, while Team Russell shot 55.6% (5 of 9) from 3-point range to compensate for a 7 of 19 overall showing from the field. Team Brown won the quarter, leading 21-20 after the first.

Team Russell burst into the second quarter with an 11-3 run to open a 31-21 lead. But in tightening its defense and shutting down the passing lanes, Team Brown went on an eventual 9-2 run to take a 35-33 edge. Cole, Hawkins and Brown led the second-quarter surge, scoring all of the team’s 23 points, as Team Brown won the period despite shooting just 36.8% from the floor.

Team Brown held court in the third quarter and built a 10-point lead seven minutes in, 62-52. But Team Russell went on a 10-0 run with Greene scoring four of her seven third-quarter points during the spurt. After a scoring drought of 2:08, however, Team Brown responded with Cole and Imani McGee-Stafford closing the quarter out with back-to-back buckets and gave their squad a 66-62 advantage heading into the final 10 minutes. Both teams had their best efforts from the floor to that point, as Team Brown torched the nets by hitting 9 of 16 (56.3%) and Team Russell hung close by draining 50% of their shots (8 of 16).

Team Russell got as close as six points in the fourth quarter, but Team Brown ran away at the end behind a game-closing 9-5 run to ice the contest.

NOTES: Hawkins tacked on an additional 90 points for being named MVP 1 to finish with 715 points overall. Mitchell was named MVP 2 for 60 points and 176 points on the night. Cole, who converted the first four-point play in Athletes Unlimited Basketball history when she hit a 3-pointer and ensuing free throw after she was fouled with 3:45 left in the second quarter, was named MVP 3 for 30 points. She finished with 496 points.