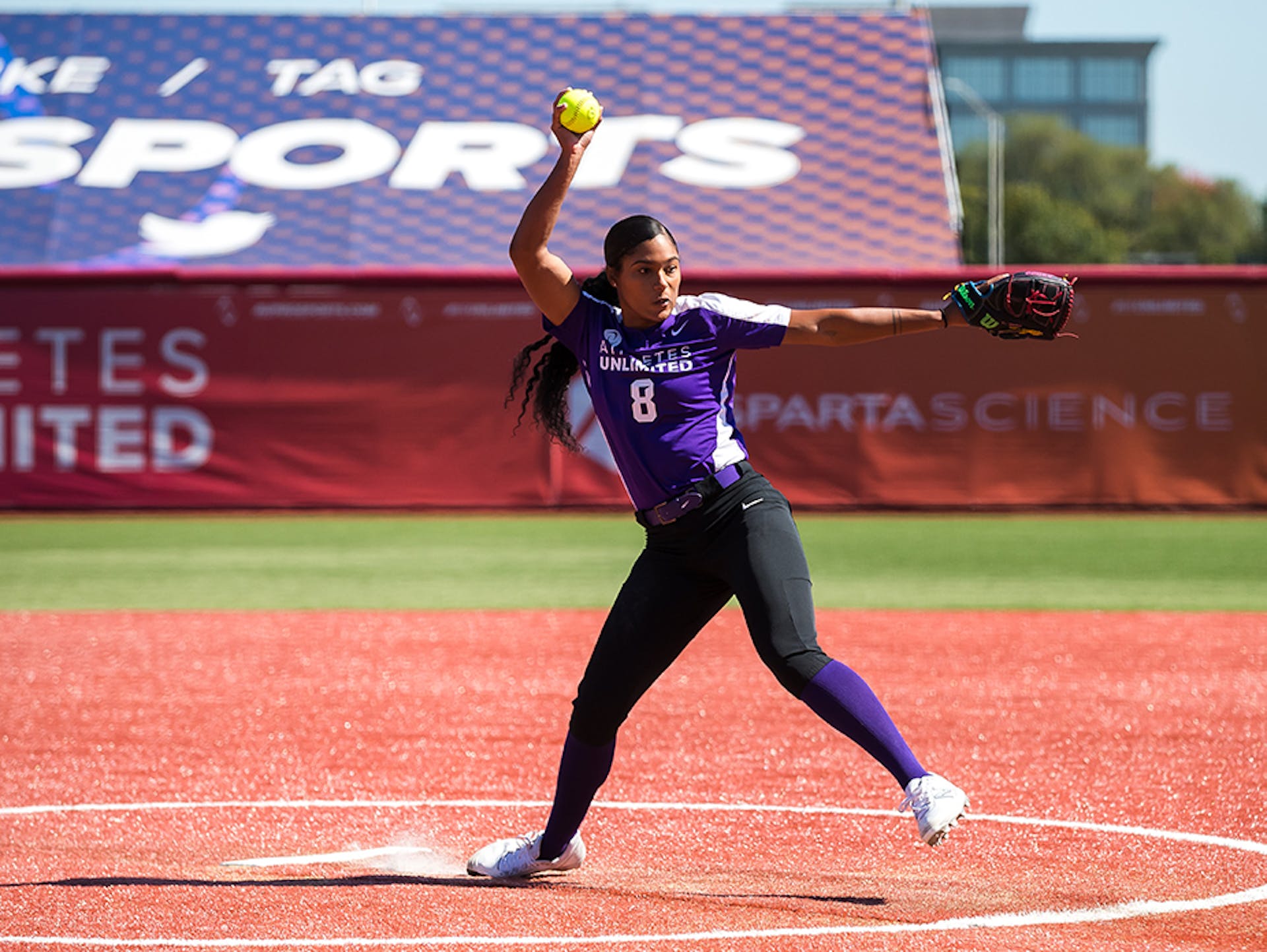 Ocasio announced her return to play with an exclamation point Saturday by flirting with a no-hitter before eventually tossing a complete-game three-hitter for Team Warren in a tense and taut 2-1 victory over Team Reed.

The game overall was a great advertisement for Athletes Unlimited Softball as it featured strong pitching by both starters, power hitting, hustle and good fielding.

Ocasio out-dueled Team Reed lefty Danielle O’Toole, who gave up back-to-back home runs in the top of the first inning to captain Jessie Warren and catcher Erika Piancastelli, who has a season-leading five.

The first hit Ocasio gave up was a one-out line-drive single to Amanda Chidester in the sixth. She gave up a one-out homer to Sam Fischer in the bottom of the seventh but worked out of a jam after a two-out hustle double to center by Jazmyn Jackson and a walk to Hannah Flippen as she got Kylan Becker on a game-ending popout.

Ocasio expressed gratitude for the support she received as she missed last weekend to tend to a family emergency.

“The support was great,” she said. “There were so many people with prayers and thoughts that were sent to me and my family, to my fiancé’s family. I was overjoyed to know that the whole organization was supportive of what was happening at home.

Ocasio walked three, struck out two and hit a pair of batters. She was voted MVP 1 of the game and earned 60 additional points for that. As far as what was working, she said: “Whatever Erika (Piancastelli) was calling.”

In addition to hitting home runs. Piancastelli has excelled as a leader this season, both behind the plate and as the emergency captain for Ocasio last week.

“I was very shocked at first when they put me in the role because I wasn’t expecting it,” she said. “But me and Lele (Ocasio) have this connection, and I knew exactly what she wanted to do with the team. So I was really honored to be able to keep that going and keep the energy and the vibes really high. I learned about the role. You always have to be on your toes. You have to be ready. You have to be able to understand your team well and how it responds to certain situations.

“So it was a very humbling experience, and I was super excited that I was able to do that.”

As far as her own power surge that plate, Piancastelli said she wasn’t sure about that.

“The vibes at AU, I guess,” she said. “I just feel really good. I feel calm in the box. I’m just seeing the ball really well right now. I’m trusting my swing, and I’m swinging hard every single time. It’s also just nice to know that my team supports me. Whether I hit a home run or not, they’re always cheering for me.”

Warren has been a captain before. But she was able to manage the tension of this game, going as far to say she didn’t know there was a no-hitter going on until the sixth.

“I have anxieties, and my anxieties are pretty high,” she said. “I don’t know about the other girls, but I do a good job of trying to calm it down with breathing. But there were a little bit of nerves. It kind of felt like a World Series game again. It was pretty cool to have that anxiety and nervous feeling of the game because I haven’t had that in awhile. But there wasn’t a doubt in my mind that Lele was going to be able to go after the next two batters. We had a plan in putting Hannah (Flippen) on base and (pitching to) Kylan (Becker). That worked and came out perfectly fine.

“Nerves were high, but it was a good nervous.”

The interesting thing about Athletes Unlimited play is that both teams have ample opportunity to score points. Team Warren picked up 10 points for winning the first inning and 50 more for winning the game. With the game being scoreless until the bottom of the seventh that enabled Team Reed to pick up 60 innings points.

Fischer earned 40 points for MVP 2 honors, and Warren picked up 20 for being voted MVP 3.