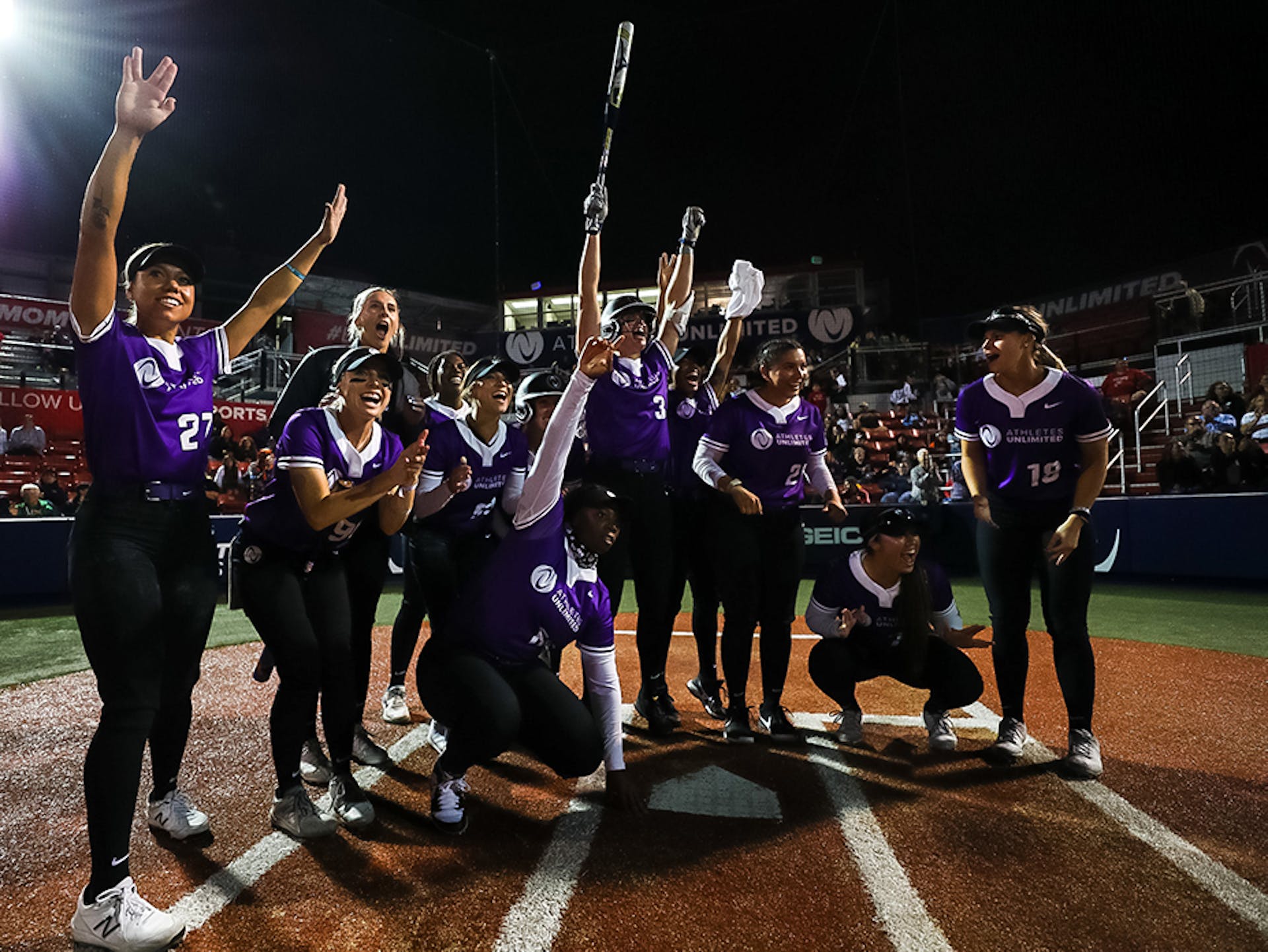 Catcher Sashel Palacios was mic’d up for the FS1 telecast of Monday night’s Athletes Unlimited game.

Palacios did some talking, but her playing spoke the loudest as she helped lead Team Jaquish (Purple) to a 6-2 victory over Team Eberle (Blue) at Parkway Bank Sports complex. She broke a scoreless tie with a leadoff home run in the top of the fifth inning. Behind the plate, she helped guide pitcher Alyssa Denham to her second victory of the season against one loss.

The only painful moment for Palacios came when she took a foul ball off her unprotected right shoulder.

“It was very eventful,” she said of her evening. “I’m just proud of our team. It was a team win. We all bought in. It was just so eventful, but it was so good that we ended this season with a win. Together, it was just a special group.”

Palacios was MVP 2 of the game, following Denham, who took home MVP 1 honors. She managed to juggle working with her pitcher with her newfound TV duties.

“I was telling the content team, ‘Hey, when are you going to give me a shot to be mic’d up?’” she said. “They delivered the very last day. I’m telling you, I think I blacked out that whole inning that I was calling the game for Alyssa. But it was such a special moment,  and I love talking to DL (analyst Danielle Lawrie), just talking, picking her brain. It was really special to be mic’d up and also watching Alyssa do her thing back there.”

Denham made her third start of Week 5 and pitched six innings, giving up four hits and two runs. This is not the first time captain Sahvanna Jaquish has drafted this super-charged battery of Denham and Palacios.

“She’s just a great competitor,” Jaquish said of Denham. “She wants to win every single pitch. She’s a groundball pitcher. In this league, that’s huge, especially when the wind’s blowing out. That wasn’t the case today. Regardless, yeah, she’s just a competitor.”

The game was a scoreless duel between Denham and Carrie Eberle of Blue. That changed with Palacios’ homer, a line drive to right against the wind. It was her second of the season, and it wound up being worth 50 innings points for the team as Blue did not score in the bottom half.

Purple broke it open with five runs in the sixth inning, sending nine batters to the plate and sending Eberle (3-2) from the game in favor of Danielle O’Toole. Samantha Show and Morgan Zerkle each had two-run singles.

Ali Aguilar hit a two-run homer for Team Blue in the bottom of the inning, and she was MVP 3 off the game.

Thus ended a nice season for Eberle, who entered the night third on the overall points leaderboard, with 1,588. She finished her season with 1,592.

All in all, it has been a good season for first-year players in Athletes Unlimited.

“Oh, my gosh, yeah,” said Purple’s Sis Bates, who moved up five spots to seventh on the leaderboard entering the night’s second game. “That’s the best part of this league, the relationships that you build. I just really love SJ (Jaquish) and think that she believed in me a lot. It felt good, because when you’re a rookie, it’s hard to get your feet under you and get going. That went a really long way. I just couldn’t be more proud of our team.”