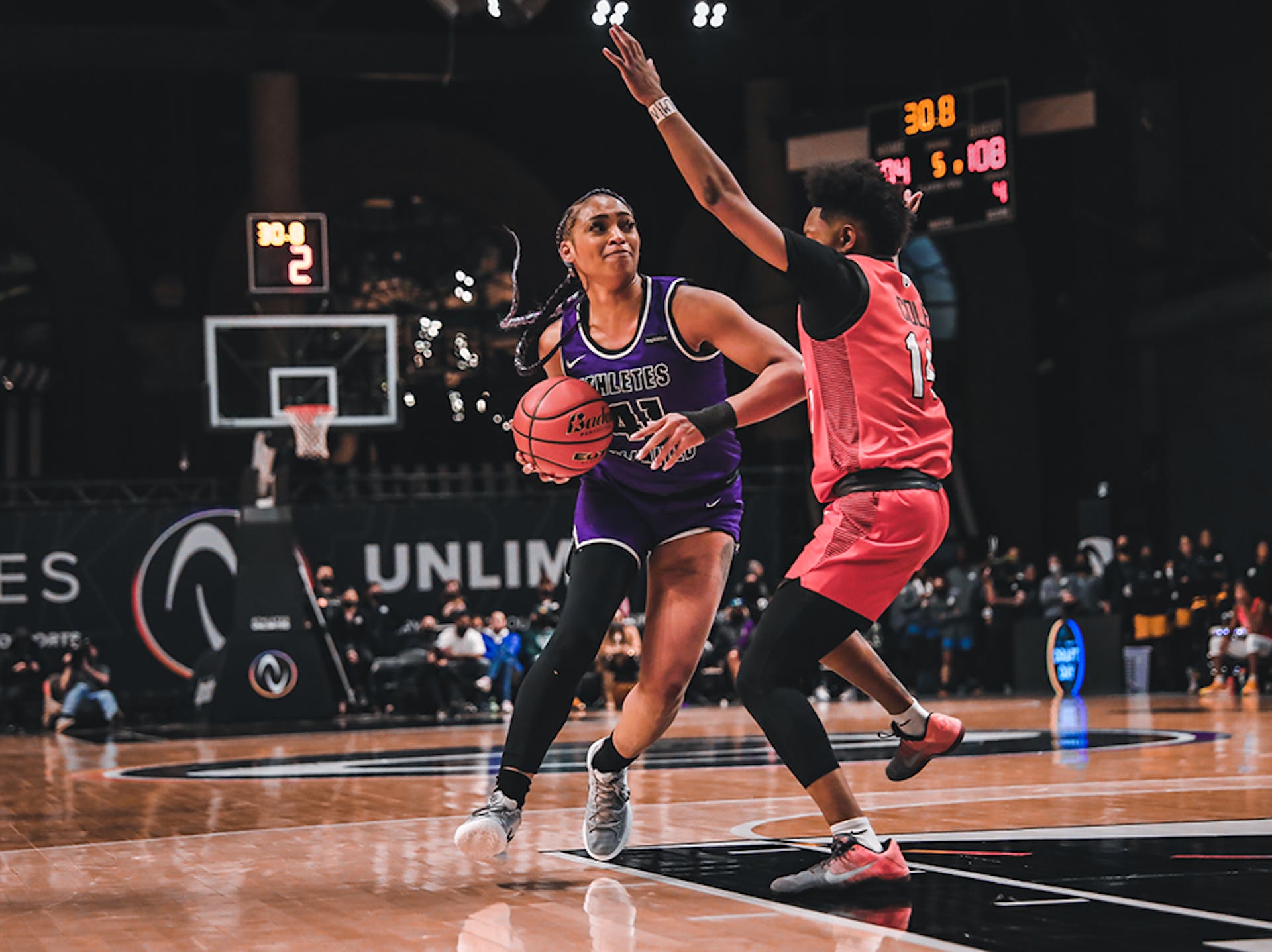 Carrington scored 16 of her game-high 30 points in extra time – including 13 in the second overtime – to lead her squad to an epic 110-104 victory over Team Russell on the second day of Athletes Unlimited Basketball.

“I was definitely ready for the game to be over, but I feel like we were all stepping up,” said Carrington, who was one of five players on her squad to score in double digits.

Team Russell had six players score in double figures, led by Taj Cole’s 24 points, including a game-tying deuce with 1.7 seconds left in the first overtime, to force a second. Lauren Manis came off the bench to score 19, while Danni McCray popped for 18. Lexie Brown had 15, including a huge 3-pointer at the end of regulation, while Mercedes Russell had 15 points and 10 rebounds. Laurin Mincy contributed with 11.

After taking a 12-point lead three times in the fourth quarter, sparked by the play of Cloud and Harrison, Team Russell went on a 12-0 run to close regulation and forced overtime.

First, it was McCray with a 3-pointer, then it was Manis with two free throws and a short jumper. Russell was fouled with 14 seconds left and drained two from the stripe, and after Lavender threw the ball out of bounds Team Russell capitalized with 10 seconds left. Cole’s off-balance 3-pointer caromed far enough for Brown to grab the loose ball, get set behind the arc and deliver the equalizer at the buzzer.

“Lexie hit the big three and we know that’s what Lexie does,” Harrison said. “It was super exciting. I think we got to be able to play more basketball and I think the fans were excited to see that. It’s really good to have those types of games, especially with the team we have, we’re stacked.”

And Carrington made sure to establish her presence in the second overtime, where she was 4 for 4 from the floor, including two 3-pointers, and 3 for 3 from the free-throw line.

After Team Russell got back-to-back buckets from Russell and pulled within one at 43-42, Team Carrington used a 10-2 run to extend its lead to nine. And while Team Carrington was finding its groove, Team Russell’s shooting frustration grew while trying to dial long distance to play catch-up. But a paltry 1 for 7 (14.3%) clip allowed Team Carrington to head into the final period with a 10-point lead, which wasn’t safe after all.

“We didn’t want to go away, we were pushing each other, we wanted to win this game,” McCray said. “Mercedes is a great leader, she was over there motivating us, we had everyone up (and having each other’s back. That’s what we wanted to do, we wanted to go out there and fight and play for each other.”

After falling behind by one late in the first quarter, Team Carrington used a 17-8 run into the midway point of the second quarter to grab a 29-21 lead thanks to a balanced scoring attack with seven different players contributing to that point.

But Cole, McCray, and Lauren Manis came alive down the stretch, scoring all of Team Russell’s points during a 15-10 half-ending run that left Team Carrington with a 39-36 halftime lead.

Jackson wasted no time in picking up where she left off from opening night, scoring six of Team Carrington’s first eight points with a pair of 3-pointers. What started out with a bit of a fast pace, the tempo slowed slightly, as the defensive intensity picked up at both ends.

Team Russell went on a 9-3 run to take a four-point lead midway through the quarter, but Team Carrington got a boost from Ty Young off the bench, when she scored the last five points of the period to push her team back in front, 17-13.

Team Russell finished the first quarter shooting just 26.3% from the floor, while Team Carrington hit 6 of 16 (37.5%) from the field.

NOTES: Despite her team’s loss, Brown was named MVP 1 for an additional 90 points and 366 points overall. Cloud earned MVP 2 honors, contributing 60 points to her 442-point night. Picking up 30 additional points was Harrison for 367 points. Each member of Team Russell won 100 points for their second and fourth quarter victories, while Team Carrington picked up 200 win points for their first quarter, third quarter and overall game wins.